This moderate growth allows the 2019 PEV share to grow to a record 5,5% (7,7% in November), so we could see this market reach two digit performances next year.

The reinvigorated Nissan Leaf remains in #1, keeping a safe distance over the off-peak month Tesla Model 3, so unless the Californian maker takes a rabbit out of the hat in December, the Japanese hatchback should win another Models Trophy award.

Below the top two, the Renault Zoe is in generation change mode, but its Bronze Medal should be safe, unless the #4 Mercedes E300e/de twins continues in flat out mode, like it did last month, when it scored a record 136 registrations.

The Climber of the Month was the new BMW 330e, becoming the November Best Seller, with the Beemer midsizer jumping 6 positions to #6, and could climb even higher next month, surpassing the #5 BMW 530e, and maybe even the #4 Mercedes E300e/de could be in danger.

Why are these luxury PHEVs so high in the ranking? Well, it all has to do with the local incentives, as there are significant company car incentives for all plugins (BEV and PHEVs), but with a price cap, that prevent nameplates like the Tesla Model S to access them, while these models (including the Tesla Model 3) fit right under the price cap, allowing them to maximize incentives (basically, they are the priciest cars that can be included in the incentives pack).

Below the top spots, the first position change happened in #15, with the Mercedes C300e/de joining the ranking in that position, with their 133 registrations being the best result ever for the Mercedes midsizer.

Adding to the Daimler record fest, the #20 Smart Forfour EV scored 20 registrations, a new record for the small EV.

But there were other PHEV shining, with the Volvo S/V60 PHEV scoring record results (58 units last month), allowing them to climb one position, to #16.

Interestingly, at a time that the Tesla Model 3 is now established on the market, the other premium brands are seeing their midsize plugin sales jump through the roof, which has two ways to look at it:

1 - Tesla is not drying up sales of the established brands;

2 - Established brands are launching PHEVs in large volumes, as a quick answer to the Californian.

So it seems Tesla is changing the market, through putting pressure on the established brands, but it is not disrupting it.

Outside the Top 20, both Porsche plugins are on the verge of a Top 20 position, with the Panamera PHEV just one unit behind the #20 Smart Forfour EV, while the Cayenne PHEV (38 units last month), is just 9 units below.

Finally, the revised VW Passat GTE registered 19 units last month, but that won't be enough for a Top 20 position. In fact, looking at this Top 20, there is not one single plugin from the Volkswagen Group, possibly the only market in the World where this happens. 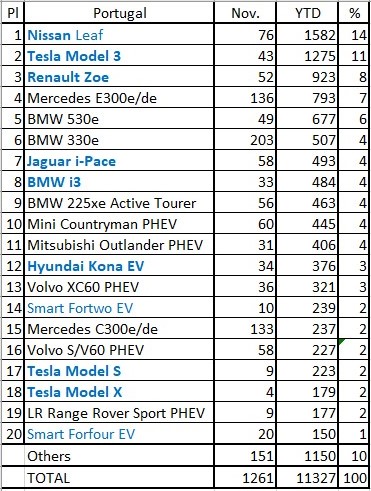