At this pace, Diesel sales could be dead by the mid 2020's, with petrol living on for another decade.

Looking at last month Best Sellers, the three times Best Seller ('16, '17 and '18) VW Passat GTE scored a record 861 units in only its 2nd full month on the market, doubling the registrations of the #2 Mitsubishi Outlander PHEV, while in 3rd we have the only BEV in this Top 5, with the surprising Nissan Leaf scoring 224 units, its best result since January, so it seems the 62 kWh version is helping to stop the sales bleeding.

Another surprising presence was the 5th spot of the new BMW 330e, scoring 168 registrations, which should also help it reach a 2019 Top 20 position in December.

To end the midsize trilogy, the Volvo S/V60 PHEV twins were #4, with 181 units, proving that the company car business is alive and well.

On the 2019 ranking, there is not much to talk about on the top positions, apart from the fact that the leader Outlander PHEV profited from (another) slow month of the Tesla Model 3 (the Netherlands are starving other European markets...) to open a gap of 700 units between them, so the Japanese SUV is the favorite for the 2019 title, which would be its first title since 2015, ending a 3 year rule of the VW Passat GTE.

The most important table change was of course the VW Passat GTE shooting to #10, with the German midsizer now aiming for the 5th or 6th spot next month.

Other changes in the ranking were the Nissan Leaf climbing one position, to #7, while the Volvo XC90 PHEV returned to the Top 20, in #18, thanks to a record 161 registrations, making it four Volvo's in the Top 20...Now, if only the new baby Volvo, the XC40 PHEV (70 units last month), managed to reach a place in the table, then we would have 100% of the Volvo lineup in the table...

But it wasn't only the Swedish carmaker to have a good month, BMW saw several good performances across the lineup, the 530e is profiting from the new AWD version to score a record 104 units, the 225xe Active Tourer registered a record 103 units, while the Mini Countryman PHEV recorded a year best performance of 107 units.

Outside the Top 20, a reference to the Hyundai Ioniq Electric, that registered a record 114 units last month, proving once again the age old formula: bigger battery = bigger sales, something that can also be said about the BMW X5 PHEV, that scored a record 88 units right on its first full sales month.
In the manufacturers ranking, Kia is on its way to revalidate the 2018 title, with 23% share, with Tesla (14%, down 1%) and Volvo (14%) running for the runner-up spot, while Mitsubishi (12%), is waiting for a slip up from the two in front, to win the Bronze medal. 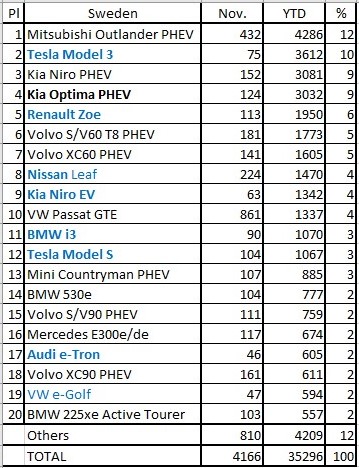 The Midsize SUV category is electrified in various degrees, from the 13% PHEV share of the leader Volvo XC60, to the 95% of the Mitsubishi Outlander, passing by the 35% of the Audi Q5.

the Japanese SUV performance begs the question: When will Mitsubishi make the Outlander an entirely plugin model?

The leaders Volvo S/V90 have a low 9% share of sales coming from its plugin versions (When will the Swedes invest more in their PHEVs?), while the Mercedes E-Class hit a strong 41%, and even the #3 BMW 5-Series reached 27%.

With the new long range PHEV version of the Mercedes GLE set to land soon, and the Tesla Model X continuing to be a regular feature, the VW Touareg will soon become the only unplugged model among the Best Sellers.