With the Chinese plugin market enduring heavy losses, in November it plunged 42% YoY, to 83,000 units, with both powertrain technologies crashing, although BEVs fared a little bit better (only -36%), as the market adjusts to a new, less subsidy-dependent, reality.

With the subsidy changes last summer, when NEV subsidies were cut off completely for vehicles with less than 250 kms electric range, while those with higher range saw their subsidies halved, the effects of these changes will continue to be felt for a few more months, possibly up until next summer.

While many models saw their sales dry up, or be significantly impacted, with smaller, cheaper models unable to compensate the subsidy loss, the most expensive end of the market continues to thrive, helping foreign OEMs to increase market share, now at 15%, and even within small EVs there were winners, like is the case of the SAIC Baojun E-Series, that saw its sales jump after the subsidies end, as it was the only model of the A00 category (Smart-like, 2-seater EVs) to keep access to subsidies, winning even last month Best Seller title.

In November, besides the Baojun E-Series win, the highlights were the 5th position of the SAIC MG ZS EV crossover, a model that Shanghai Auto has high hopes in making it the first Chinese plugin model to sell in significant volumes in overseas markets, so the fact that the MG crossover is making itself noted at home, bodes well for its success elsewhere.

The Tesla Model 3 and its disciples (GAC Aion S and Geely Geometry A) are coming to the rescue of the Chinese market, with these 3 models already representing 16% of the total market last month, thanks to all three models scoring record results last month, as these new generation EVs show the market where to go in order to resume the growth path.

Interestingly, 4 of the Top 7 sellers in November were models launched this year, which says a lot about the fast-changing evolution of the Chinese market.

#1 – Baojun E-Series: With the end of subsidies for most of the small city EVs, unable to reach the minimum 250 kms range, the Baojun E-Series won the lottery, with the Shanghai Auto and General Motors offspring watching its sales jump in the past few months, winning consecutive podium positions, and in November it even managed to beat the BAIC EU-Series and become last month Best Seller, having registered a record 9,809 units last month. The access to the current subsidy, added to its competitive price (CNY 93,900 / USD 14,700) before subsidies, makes it an appealing model for car-sharing companies, as well as other kinds of fleets.

#2 – BAIC EU-Series: The electric sedan this time was relegated to the runner-up spot in November, with the 6,258 units of last month being its worst result since April. Is the Beijing Auto model losing charge? Despite an attractive design and specs (215 hp, 416 kms / 260 mi NEDC, US $32,500), the Beijing Auto is starting to look dated, next to newcomers like the the EVangelist Tesla Model 3 and the Californian Chinese disciples, the GAC Aion S and Geely Geometry A.

#3 – GAC Aion S: Things look great for the Aion S, because the sleek sedan continues to improve its performance every passing month, having scored yet another record, with 5,538 units, reaching the 3rd place last month, its 5th Top 5 spot in a row. And if we add the 865 units of the badge-engineered Toyota iA5 EV, that is nothing else than a Aion S with a Toyota badge, the GAC sedan registered 6,403 units, which is higher than the 2nd placed BAIC EU-Series... But back to the Aion S, beyond the stylish (and aerodynamic - 0.245cd) looks, this new model bears some impressive specs: a 59 kWh CATL NCM 811 battery, 510 km / 318 mi NEDC range and Level 2 driving aids, but the real killer is the price: Around 180,000 CNY / $26,000. Before subsidies.

#4 – Tesla Model 3: The success of the Tesla sedan in China is starting to materialize, in November the sports sedan scored a record 4,658 units, allowing it another Top 5 presence. With the GF3 ramping up, one can imagine the Californian becoming a familiar face next year in this Top 5, and with the Tesla having “Diana Ross” levels of customer attraction, who knows how high it can go...

#5 – SAIC MG ZS EV: The production of the compact crossover has been steadily ramping up, and last month it reached a record 3,687 units, allowing it to achieve its first monthly Top 5 spot. While the MG model has a middle of the road specs (45 kWh battery, 262 kms / 163 mi WLTP range, 110 kW motor), it compensates with a spacious and well apointed interior. With Shanghai Auto betting heavily on its electric crossover to finally get a hold in foreign markets, the ZS EV will also have to succeed in its domestic market, in order to gain scale and profitability. Will they make it?

The market is now adapting to the new reality, with many former best sellers now witnessing symbolic sales, while a new generation of EVs is rising.

We’ll start with the position changes, with the Geely Emgrand EV climbing to the 6th place, while both the Great Wall Ora R1 and BMW 530Le surpassed the Roewe Ei5, allowing them to reach the 9th and 10thpositions, respectively.

But the Climber of the Month was once again the GAC Aion S, jumping 2 positions, to #12, with both the GAC and another of The Supremes element, the Model 3, now aiming for a Top 10 position this year, which would be a great starting point for a Top 5 (Podium?) spot in 2020.

The other member of the “Model 3 & the Disciples” band, the Geely Geometry A, finally pulled out a decent performance, thanks to a record 2,465 units, allowing it to be #7 in November, with the streamlined becoming for the first time the best seller among their Geely stable mates. Is Geely’s Cinderella finally ready to blossom?

There are other new players taking the opportunity to disrupt the market, like the MG ZS EV, 4th in November, with 3,687 units, that with a little of luck, can still join the ranking next month.

Outside the Top 20, a mention also to the ramp-up of the Renault K-ZE, aka Kwid EV, now at 1,382 units, in only its 3rd month on the market, while among the landing models, we have two models already scoring 500-plus performances, with the Audi Q2L e-Tron registering 785 units, while GAC sold 865 Aion S to Toyota, that the Japanese maker rebadged as iA5 EV. Why? EV quotas, with the Corolla/Levin PHEV twins not really setting the market on fire (500 units each, in November), Toyota has to resort to this subterfuge in order to win NEV credits, so the Aion S is a piggy-bank for GAC in two ways, not only it is a popular EV by itself, but it is also an easy sell to car makers in need of NEV credits, so I wouldn’t be surprised to see in a few months Aion S rebadges for Honda, Fiat, Mitsubishi, insert name…

Outside the podium, Geely (5%) is hanging on, but has to keep a close eye on Great Wall and GAC, both with 4% share, in order to keep the 4th position. 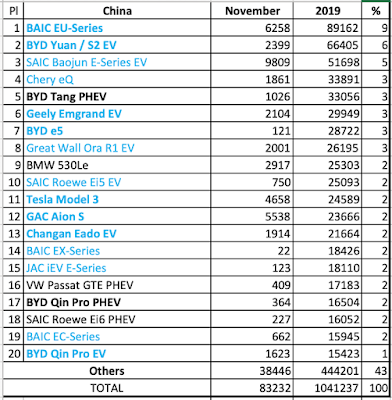