Models: Chinese models down, Chinese models up
The plugin market crisis has stabilized, with the registrations dropping 26% YoY in November, to some 177.000 units, with the subsidy-related sales drop in China keeping the market down.

As a result of these drops, the PEV share in November was 2,2% last month, keeping the 2019 PEV share at 2,2% (1,6% for BEVs alone), maybe December can bring a slight increase in the final number?

Looking at the models ranking, the Tesla Model 3 continues to reign supreme, more than doubling the result of the runner-up, while the #2 BAIC EU-Series has enough distance to keep the silver medal safe throughout December, something that the BYD Yuan can't say, as the #4 Nissan Leaf is getting closer every month.

The first position changes happened at the end of the Top 5, with the tiny Baojun E-Series climbing to #5 and the BMW 530e/Le twins reaching #6, with the German luxury sedan becoming at the same time the Best Selling PHEV, surpassing the two times winner (2014 & '15) Mitsubishi Outlander PHEV, that is seeing the chance to win its third trophy slip through the fingers.

With a number of Chinese models having seen its sales dry up, there were changes happening as a consequence:

- The Toyota Prius PHEV and Tesla Model X jumped two positions each, to #11 and #12, respectively, with the Californian sports-SUV hitting a year-best off-peak performance (3.392 units) last month, so we could see it go after the Japanese hatchback in December, and maybe even climb another position in the end;

- The Geely Emgrand EV was up to #16, and the Great Wall Ora R1 also climbed one position, to #18, but December could see it go down, because...

A final mention for the VW e-Golf, that might end the year in #13, which would be a great score for the German hatchback. 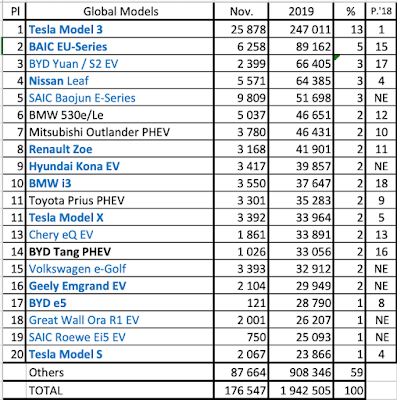 Manufacturers: Tesla and GAC shine
This month Tesla pulled out its best off-peak month so far, so expect another record month in December, with the Palo Alto maker ending on a high note.

Toyota was up to #10, while Renault also climbed positions, in this case to #13, with the French maker reaching 4.561 deliveries, its best result since June, and with December set to see the Zoe return to regular sales levels and keep the K-ZE expansion continue, expect Renault to reach (near-)record numbers in the last month of the year.

But the real star in November was GAC, scoring a record performance for the second month in a row (6.048 units), allowing it to jump two positions, to #17, and December could see it climb another two spots to #15.

Another Chinese brand with ambitions this year is the #21 Dongfeng (30.293 units in 2019), but the #20 Chevrolet is proving to be a strong adversary, so the 1.377 units that separate both, could be enough to keep the American brand in the Top 20. 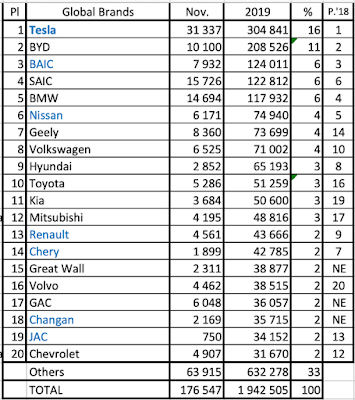