Interestingly, this time it were pure electrics dragging the market down (-24% YoY), while plugin hybrids saw their sales sales surge (+69%), leading to a BEV vs PHEV breakdown of 60% / 40%. Does this mean that PHEVs still have a future in this market?

The new rules, added to the effective sales hangover of a number of last year Best Sellers, lead to a complete reshuffle of the Top 20, with the headlining shock news being the Opel Ampera-e (Who?!? answer: the European version of the Chevrolet Bolt) taking the Best Seller trophy in January, with 309 units, a new record for the small hatchback in this market.

But...Wasn't this car dead?!? Or about to?... - Well, it was going to start rolling into greener pastures, but then with the new CO2 rules enabled, Opel owner PSA decided to keep it for a few extra months, cutting its price in a big way (10,000€ discount, now being sold at 34,149 eur), doing its own VW e-Golf strategy, at least until the new Opel Corsa EV and Opel Mokka X EV are not delivered in large volumes.

Speaking of VW e-Golf, the veteran model was the runner-up model last month, with 304 registrations, so despite the VW ID.3 shadow on the horizon, the old geezer is still selling in significant volumes, which says a lot about the popularity of the nameplate.

The Mitsubishi Outlander PHEV was 3rd, with 235 deliveries, its best result of the last 6 months, while the Volvo S/V60 PHEV twins ended just 17 units behind, being the midsize model best result since 2016, being just one of the many PHEVs shining last month:

- Another two full-sized plugin SUVs had good scores, with the Range Rover Sport PHEV scoring 51 registrations, its best result in 12 months, while the Volvo XC90 PHEV delivered 108 units, the first time since 2016 that the flagship SUV from Volvo scores a 3-digit monthly result;

- Speaking of Volvo, its XC60 PHEV midsize SUV registered 94 units, its best result in a year.

But the news rules also provided good news for all-electrics:

- The new Kia Soul EV finally started to be delivered in decent volumes, with the Korean crossover scoring 67 registrations, a new record for the Kia EV:

In fact, it became quite visible that PSA decided to wait for January to deploy its plugins, besides the sudden surge of the Opel Ampera-e and the Peugeot 208 EV landing, three other models started their career last month, with the Peugeot 3008 PHEV crossover landing in #15, with 71 units, its Opel sibling Grandland X PHEV started its career in #20, with 49 units, and the Peugeot 508 PHEV midsize model landed with 46 units.

Outside the Top 20, a mention to the landing of the Seat Mii EV (22 units) and Skoda Citigo EV (41), the Spanish and Czech twins of the small VW e-Up, two models that should show up in the Top 20 soon.
In the manufacturers ranking, Volvo started the year in the lead, with 14% share, closely followed by the surprising Opel (12%), while Volkswagen (10%) closed the podium, ahead of Kia and Mitsubishi, both with 7% share. 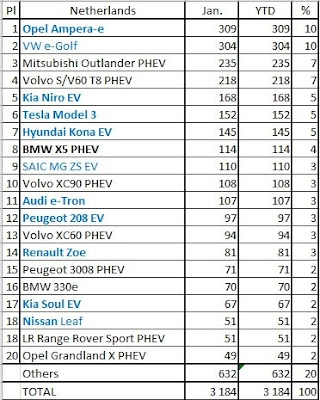