Will the plugin share touch the 10% ceiling this year? Now that would be fun...Wouldn’t it? Please place your bets.

In January, several models profited from the start of the 2020 CO2 counting system to  perform record results, and none did it more spectacularly than the Renault Zoe, with the French hatchback scoring close to 10,000 units, a spectacular opening salvo for 2020.

But the Renault EV will face some stiff competition this year, and the fiercest of them all is the Peugeot 208 EV, that jumped immediately to #2 in its first full month on the market, with an impressive 3,897 units, but PSA’s EV deployment didn’t ended there, with 3 other models landing immediately in the Top 20, as we had the crossover Peugeot 3008 PHEV in 6th, the (most beautiful) midsizer Peugeot 508 PHEV in #15 and finally, the crossover Opel Grandland X PHEV, in #18.

So PSA, who had never, ever, registered over 1,000 plugin registrations in one month, all of the sudden, scores over 12,000 units...In January alone.

And the Opel Corsa EV and Peugeot 2008 EV are still in ramp up mode...

Another impressive performance is of the veteran VW e-Golf, 3rd last month with a record 3,296 units, with Volkswagen milking it to the extreme (as in, heavy discounting), the German hatchback is having a second life, as if the old geezer was saying: “ID-who? Never heard of it!”

As plugins make inroads into the mainstream market in Europe (and more models are available as plugins), it starts to become natural that mainstream buyer tastes start to influence the EV table, with this last one starting to look a lot more like the overall market.

#1 Renault Zoe– The 9,782 deliveries of January meant tripling sales and the French hatchback best result ever, meaning that the production ramp up of the revised version is up and ready to satisfy whatever demand there is. Also,it is ready to start 2020 on a full charge, because it has allowed it to already open a significant distance over the competition, something that might prove useful further along the year. Back to January, France pulled the usual heavy lifting, with over 5,000 units, anew record, but it wasn’t the only record score, in Germany the Zoe also had a four-digit score, with 1,798 units, with Norway (533 units) and Southern Europe (410 units in Italy, 397 in Spain, 230 in Portugal) also helping to the Zoe’s outstanding result.

#2 Peugeot 208 EV – Apparently the production ramp up of the French hatchback is doing fine, as the striking model hit 3,897 units last month, winning its first monthly podium seat, highlighting the fact that 208 EV has good growth prospects for 2020, especially considering that its career is barely starting now, with a number of markets still without units. While its home market (2,537 units) pulled out the heavy lifting, it wasn’t just France doing all the hard work, as the UK (400 units), Italy (318) and Spain (231) also helped the Peugeot EV to reach the runner up spot.

#3 Volkswagen e-Golf– The evergreen German model hit  a record 3,296 units last month, up 95%(!) YoY, which is an amazing result for a model that is supposed to be in sunset-mode for months now and has its sucessor now ramping up production in the Zwickau factory. It seems VW is going all in into plugins (well, with the CO2 rules now in place, it has to), milking everything it can from its current best selling electric model. Regarding January performances, the Volkswagen EV main markets were Germany (1,120), Netherlands (304), Norway (497) and the UK (600).

#4 Nissan Leaf– The Japanese hatchback was up 17% in January (Yey!!!), to 3,177 units, with the Nissan EV winning a bit of charge and keeping up with the best, mostly thanks to promotions (as in, discounts), in a few markets. As such, looking at individual countries, the UK (900 units) was its largest market,
followed by Norway (366), France (360) and Ireland (296).
#5 Mitsubishi Outlander PHEV– The Japanese SUV was up 11% last month, to 3,149 units, with the Mitsubishi workhorse benefitting from its unique formula (lots of utility and space, for not that much money) to continue running with the best, following the EV bubble growth. Looking at individual countries, Germany (868 units) and the UK (600), were its largest markets, with the following being Sweden (427) and Norway (303).

Looking at the remaining ranking, besides the thunderous arrival of the PSA team, we should also notice the 10th spot of the new BMW X5 PHEV, with a record 1,974 units, proving that big batteries also help plugin hybrids to increase sales, while two other plugin hybrids also shined, with the #11 VW Passat GTE scoring its best result since 2016 (1,890 units), while the #12 Volvo XC60 PHEV registered a record 1,761 units.

In the BEV field, there were a couple of significant developments, with the BMW i3 dropping to #13, having seen its sales drop 22% YoY (are the first wrinkles starting to show?), while the #16 Kia Niro EV registered its best score in 10 months, with 1,310 units, although i keep finding it an underwhelming performance, considering the success of its cousin, the #9 Hyundai Kona EV.

In the manufacturers ranking, Renault (13%), BMW (12%), and Peugeot (10%) are all running for the leadership, while Volkswagen (8%) is looking for a chance to join the podium. 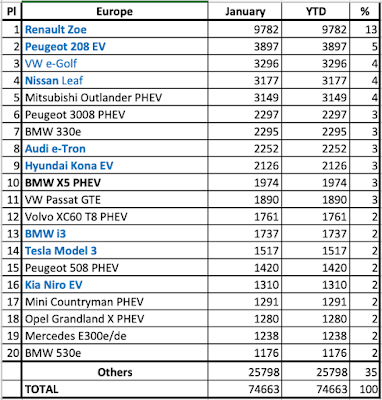