A Star In Born

Expect the next months to see a confirmation of the growth trend, as July ‘19 was the first month with the current subsidy rules.

Looking at July Best Sellers, we have 3 compact-to-midsize sedans ( #1 Tesla Model 3, #3 GAC Aion S and #5 BYD Qin Pro EV) and 2 city EVs, both from the same stable (the SAIC-GM-Wuling conglomerate), the known Baojun E-Series in 4th, and the new Wuling Mini EV, a tiny, cheap EV that is sure to make seismic waves on the market, reaching immediately the runner-up spot right in first its full sales month...

The poster child for electric mobility hit a record 11,575 units (including a few imports), and while it’s not its all time best, Tesla’s midsizer is firmly above the 10,000 mark. And the Model 3 is starting to get in the way of the category Best Sellers in the overall market, as the Californian was ahead of the Audi A4 and not that far-off from the BMW 3-Series (14,351 units and Mercedes C-Class (14,633), so the Tesla sports sedan still has some room to grow. Will we see it reach some 15,000 units/month cruise speed this year? Another question is, will Tesla deliver a surprise performance in September? Mmmm...Discuss.

A big name for such a small car (is it a compensation thing?), the Wuling EV, let’s call it that way, scored 7,348 units in its first full sales month, a record landing, that is only the tip of the iceberg, as this vehicle is currently the one with highest amount of reservations in China (about 50,000 have already been ordered), and deliveries in August are already above 15,000! So, what is the secret? Well, from the start, it is one of the cheapest EVs on the market ($4,200!!!), and yet, it’s not all that bad, as the SAIC-GM-Wuling joint-venture model can seat 4 people (or 3 people and a bit of cargo, or 2 with a fair amount of cargo – 741 liters), in car that is a tad larger (2,917 mm/114.8 in) than a Smart Fortwo EV, sure, range is not brilliant (smaller battery version has 9.2 kWh battery, top spec version has a 13.8 kWh battery), just like the motor (27hp), but it has only 665 kg curb weight to carry around and is highway capable, so in order to have the 4,200 USD price, without subsidies, one can’t expect miracles! At this price level, the Wuling EV is in position to be a disruptive force in urban mobility, not only against 4-wheeled private transportation, but also against 2 and 3-wheelers, i mean, for 4,200 US Dollars, one can have an electric four seater vehicle, with a ceiling to protect you in rainy days! This Wuling EV could be a game changer for many, and in the overall EV market, it can beat the best and brightest in sales volumes...

GAC’s sleek sedan was 3rd in July, having registered 3,685 units (excluding the Toyota-badged iA5 units), so we could start to see now the sleek sedan cuise speed (+/- 3,500 units/month), now that GAC has their attention drawn into the Aion S new crossover sibling, the Aion V (1,069 units last month). One of the most competitive domestic electric sedans on the market, the Aion S should continue to be a regular in this Top 5, being a strong candidate to the 2020 medals positions.

Baojun works as the more upmarket and hip version of Wuling, and thanks to their E-Series (E100/200/300) lineup of City EVs, the SGMW (SAIC-GM-Wuling joint-venture) offspring has seen its EV sales jump in the past few months, winning a 4th spot in July, thanks to 3,416 units last month. The access to the current subsidy, added to competitive pricing (CNY 93,900 / USD 14,700) before subsidies, makes it an appealing model for young urban dwellers, as well as car-sharing companies and other kind of fleets.

The maker’s reply to the GAC Aion S and Xpeng P7 reached  3,400 units in July, so BYD’s bet on its electric sedan to stay among the Best Sellers is working, but demand could end up being an issue soon, not only because of the ever increasing competition from other makers, but also because of the internal competition of the new Han full size car, an appealing and technologically advanced model that might move way some buyers from its smaller sibling.

Looking at the 2020 ranking, the podium positions remained the same, with Tesla already having enough advantage to start preparing the celebrations for its first Best Selling Model trophy ceremony, while the Baojun E-Series rise and rise continued, climbing now to the 4th position, supassing the BMW 530Le.

This move highlights the latest trend, City EVs are returning to the spotlight, not only with the Baojun E-Series, but also with the Greal Wall Ora R1, now called Great Wall Ora Black Cat, that scored 2,771 units in July, its best result in over a year, and now making 3 small BEVs in the Top 9.

And another Micro-EV is getting there too, as the previously mentioned Wuling HongGuang Mini EV joined the table in #13, and should be headed soon for the runner-up spot, as only the leader Tesla Model 3 is too far away (50,000 units away, to be more precise) to be bothered by it.

And it wasn’t only with the SGMW minions that Shanghai Auto had reasons to smile about, as its MG ZS EV was also up, in this case to #16, while NIO saw its ES6 best seller climb to #6.

Finally, BYD celebrated the landing of its Han EV flagship sedan, with the first 1,205 registrations.

If the Model 3 only found its true potential in China, once it started to be made locally, the same can happen to both of the top of the range Teslas, even leaving plugin hybrid models out of the equation, like the #5 BMW 530Le or the #10 Li Xiang One, the fact is that both Teslas are being trounced in China, the Model X is the only of the two that is being delivered in significant volumes, and yet, it has only delivered 2,010 units this year, well below the 3,381 of the NIO ES8, and last month, the recently landed Audi e-Tron, still being imported from Belgium, outsold it on a 3-to-1 basis...The picture for the Model S is even darker, its two digit performances mean that it is being outsold by the recently landed Porsche Taycan, and a certain BYD Han EV landed last month with 1,205 units! 1,205!!!

“Yeah, but the volumes for the full size segments do not justify the hassle for local manufacturing...” – some might say.

That is true for the USA or Europe, but not in China, where big cars still sell well, just to give you context, the locally made Mercedes E-Class (88,647 units this year) is selling at the same pace of the locally made Mercedes C-Class (87,903), so if Tesla could sell as much Model S as it is doing Model 3’s in China, that would be an additional 100,000 units in volume! For one model, in one market! It’s as much as the Model Y will do next year in China...Elon, if you’re reading this...

Looking at the manufacturers ranking, the market is becoming ever more fragmented, with BYD (15%, down 1%) still in the leadership, but slowly losing charge, with Tesla (13%, down 1%) in 2nd.

SAIC (12%, up 2%) is 3rd, although i should say, SAIC+SGMW are in the 3rd spot, because if we remove the joint-venture small EV models from the SAIC tally, the Shanghai maker would have only 6% share, same as the SAIC-GM-Wuling conglomerate. Technicalities, technicalities....SAIC could just make the whole thing simpler and buy the rest of the joint-venture. Better yet, SAIC. Just buy Wuling and the whole General Motors outright!... 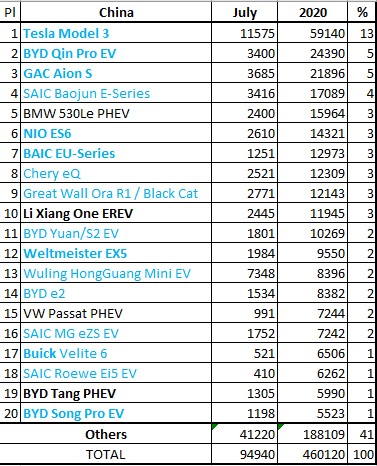