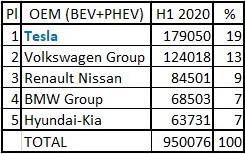 If we gather plugin sales by Automotive Groups, Tesla is ahead, with 19% share, followed by the rising Volkswagen Group (13%), that increased the distance to the Renault-Nissan Alliance, that lost 2% share regarding the first quarter of this year, but it is still above the 8% of last year.

Both the #4 BMW Group and the #5 Hyundai-Kia kept their positions and both lost 1% share regarding three months ago, now having 7% share, but the balance is still positive for the Korean OEM, as they ended 2019 with 6% share.


What catches our eyes in this Top 5 is the absence of Chinese OEMs, last year we had two (BYD and BAIC), expect these OEMs to rebound in a big way in the second half of the year. 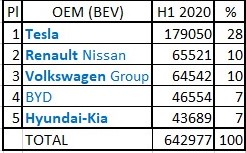 Looking only at BEVs, Tesla lost 1% share regarding Q1, but it is still 5% above the 2019 result, while the #2 Renault Nissan Alliance lost a significant amount of share in this second quarter, dropping from 13% in Q1, to the current 10%, and although is it still better than the 2019 final score (8% share), it has seen the Volkswagen Group is getting really close, now less than 1.000 units behind, although the German OEM has also lost 1% share regarding Q1, the current 10% share is double what VW Group had in 2019.

Expect the German OEM to climb to the Second Spot soon, possibly by end of Q3.


BYD is also on the rise, climbing one position to #4, while increasing its QoQ share by 1%, to 7%, but despite this recovery, the Chinese OEM is still behind last year result of 9% share.

Comparing with the BEV+PHEV table, the big defeated is the BMW Group, that due to its heavy reliance on PHEVs, disappears from the Top 5, while comparing with last year Top 5, the Chinese BAIC and SAIC are left out, but expect SAIC to rebound soon, as the Shanghai maker has recently increased its sales (and share).