Registrations were finally up last month, by 76%, with plugin hybrids in particular jumping 106%, to 88.000 units, its highest growth rate since 2015, with the 248.000 units registered in July represented the 4th best result ever and the best July month so far, so one can say that the second half of the year has started on the right track, which is already having a positive impact on the YTD numbers, currently down by just 5% YoY, to 1,2 million, so we should see the plugin market end the year with positive numbers.
The overall automotive market is also recovering, having dropped by just 7% last month, leading to a July PEV share of 3,7%, pulling the 2020 plugin share to 3,0%, above the 2,5% of last year.
The future will depend much on the development of the pandemic and the gravity that the subsequent economic crisis, but whatever happens, expect plugins to weather the storm better than the overall market, increasing its PEV share on the way.
With BEV growth trailing behind PHEVs (+63% vs +106%), the BEV/PHEV breakdown saw plugin hybrids recover in July (36% share), allowing them to recover 1% in the YTD tally, to 67% BEV, 33% PHEV.
With a helping hand from the Chinese EV market, the Tesla Model 3 reigned supreme in July, doubling the sales of the runner-up Renault Zoe, with the French hatchback keeping its 10.000-ish" performances, while the Tesla Model Y won the monthly Bronze medal, thanks to 7.540 deliveries, allowing Tesla's new baby to jump three spots in the Top 20, to #11, in the coming months expect the Model Y to jump further positions, possibly reaching the podium by September.

In other news, the Hyundai Kona EV is on fire, with the Korean crossover jumping to #4, thanks to a record 6.257 units, and the good news for pure electric models haven't ended here, as the #8 Audi e-Tron and #9 GAC Aion S have both surpassed the veteran Mitsubishi Outlander PHEV, and with the #11 Tesla Model Y in ramp up mode, expect August to see just one plugin hybrid model in the Top 10.
Other models shining were the #5 VW e-Golf scoring a record 4.364 deliveries, an amazing result for a model on its last legs, the #14 Kia Niro EV was up 2 spots, thanks to a record 3,887 units score, while two Chinese models climbed positions in the table, with SAIC's MG ZS EV now in #16 and NIO's ES6 now in #18, highlighting the recovery of the Chinese EV market.

But there were also highlights on the plugin hybrid side, with the Volvo XC60 PHEV returning to the table, in #17, while the Ford Kuga / Escape PHEV benefited from its European operations to rise into #20, with a record 6.409 units to boot.
Outside the Top 20, a special reference to the Wuling Hong Guang Mini EV, that had 7.348 units in its first full sales month,and we should see it here next month, as there have been reports of over 15.000 deliveries in August, and if the 200.000 units production plan for this year do materialize, we should see it reach the Silver Medal by the end of the year, and it will be a strong candidate for the 2021 Best Seller title.
On the PHEV side, the models on the rise are the Volvo XC40 PHEV (3.908 units), Mercedes A250e (3.504) and BMW 330e (3.224), all personal best performances.
The case of the BMW model is especially significant, despite an early arrival to market (it was introduced in 2015), the midsize Beemer has been sleepwalking since then, watching the presentation of the disruptive Tesla Model 3 (2016), its introduction to market (2017) and subsequent sucess (2018), with apparent indifference, with BMW not bothered to ramp up production and promote it accordingly.
Now that disruption is starting to affect the European automotive market, the German maker is running from behind, trying to recover on the lost time, namely by (finally!) launching the all-important station wagon version of the PHEV into the market. Too little, too late? 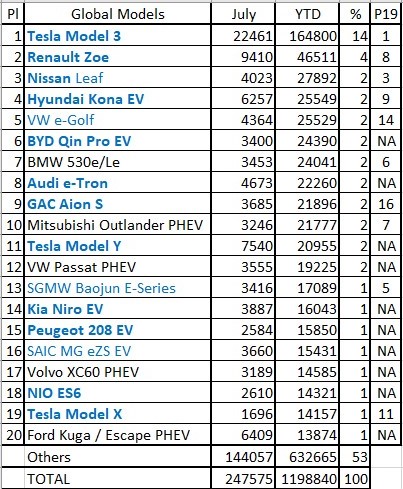 Manufacturers: SAIC #2 in July
With such a high level of sales, June saw 10 brands score five-digit performances, and if Tesla's score isn't surprising, considering past performances, there were a few surprising scores, with three record performances: the #11 Mercedes registered 11.583 units, its first five-digit score, while both Korean brands shined, with Kia delivering 10.191 units and Hyundai 9.485.
In the first half of the table, Shanghai Auto, or should i say, SAIC + SGMW(1), was the highlight, reaching the runner-up spot last month, with over 17.000 deliveries, distancing from the #6 Renault and inching closer to the #4 BYD.
If the Top 10 has remained stable, the lower half has seen some action, with GAC climbing to #13, while Ford's rise in the table continues, with the Dearborn maker climbing one position, to #17, thanks to 7.300 registrations, its third record performance in a row(!), and expect the American maker to continue climbing the ranking in the following months.
Another maker shining was Porsche, that had a record month in July, with 5.204 units. 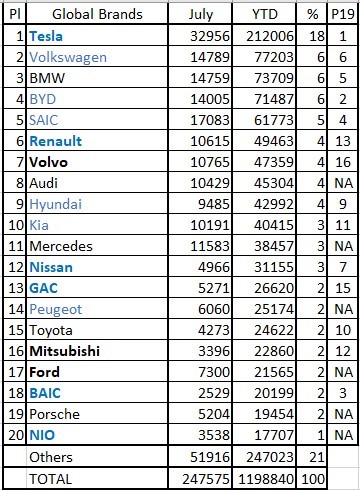