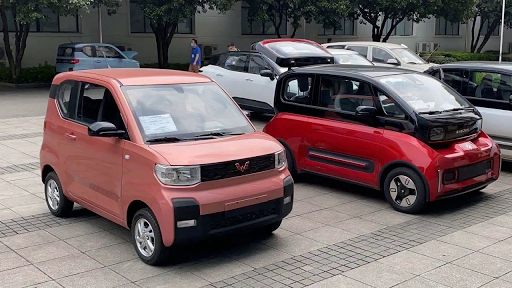 While the overall Chinese market remained with positive numbers last month (+9% YoY), plugins sales are firmly on the fast lane, growing by 120% YoY in October, to 147,000 units, a new year best, with BEVs growing faster (+128%), than plugin hybrids (+93%), allowing pure electrics to have 82% of all plugin sales last month, slightly above this year average of 79%.

Looking at October Best Sellers, we have 3 City EVs, confirming the return of small EVs to the spotlight, with the Wuling EV keeping the Best Seller status..

A big name for a small car, the Wuling EV scored a record 20,631 units last month, a new all-time record for a single model in China, meaning that the production ramp up continues, so expect the tiny four-seater to continue growing until the end of the year. The reason for the overnight success? It is one of the cheapest EVs on the market ($4,200!!!), and yet, it’s not all that bad, as the SAIC-GM-Wuling joint-venture model can seat 4 people in car that is a tad larger (2,917 mm / 114.8 in) than a Smart Fortwo EV. Range is not brilliant (smaller battery version has 9.2 kWh battery, top spec version has a 13.8 kWh battery), just like the motor (27hp), but it has only 665 kg curb weight to carry around and is highway capable, so in order to have the 4,200 USD price, without subsidies, one can’t expect miracles... At this price level, the Wuling EV is in position to be a disruptive force in urban mobility, not only against 4-wheeled private transportation, but also against 2 and 3-wheelers. This EV could be a game changer, and not only in China...

The poster child for electric mobility hit 12,143 units last month, with Tesla’s midsizer steady in the 10,000-plus cruise speed. With the recent refresh and new LFP SR+ version added to the year end sales bump right on the corner, will we see it reach some 15,000 units/month in December?

Probably inspired by Deng Xiaoping famous quote: "It doesn't matter wether a cat is black or white, as long as it catched mice",  Great Wall decided to create a Cat Pack, transforming its tiny R1 Smart-lookalike into the Black Cat, launching the R2 model (think Scion XB/Toyota Urban Cruiser kind of vehicle) as the White Cat, and to lead the Pack, Great Wall is now preparing the launch of the Good Cat, a chunky (and funky) compact hatchback (VW Golf sized) that kinda looks like a Porsche 356 in the front, a Toyota from the side, and the back...Well, it’s its own thing. But enough of the Good Cat, we are here to talk about the Black Cat, that delivered 6.269 units in October, the City EV highest score ever, so it looks the new name is allowing a second youth to the Ora Black Cat, making it a good cat, because of the many mice sales it gets.

Compared with the bare basics Wuling EV, the Baojun E-Series (E100/200/300) are the SGMW more hip and upmarket city models, seeing their demand stay high during the past few months, scoring even a Year Best result last month, thanks to 5,949 units delivered. The access to the current subsidy, added to competitive pricing (CNY 93,900 / USD 14,700) before subsidies, makes them appealing for young urban drivers, as well as car-sharing companies and other fleets.

BYD's flagship model was 5th in October, having registered 5,055 units, a new record for the sleek sedan, so it looks the production ramp up is going smoothly and demand is allowing consecutive record performances. One of the most competitive domestic EVs on the market, the Han EV will probably become a regular in this Top 5, thanks to competitive pricing, it's the size of a Model S, and yet it costs only $32,800, less than the cheaper Model 3. But price doesn't tell the whole story, with a cutting edge 77 kWh LFP battery allowing it to reach 605 km (376 miles) NEDC range (think 400 km / 250 miles in real world), the Han EV is a whole package, with good looks, competitive specs and features, with the killer prices being just the icing on the cake. 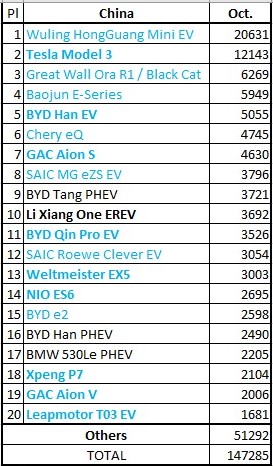 Looking at the remaining Best Sellers table in October, a mention to a few record performances, namely SAIC's Roewe Clever EV, with the Shanghai-based maker banking on the synergies of the SGMW joint-venture in small EVs, it has also created it's own vision of the tiny two-seater theme, with the Clever EV, that clocked 3,054 units last month.

The Welmeister EX5 record month (3,003 units), added to Leapmotor's surprising  score of 1,681 units coming from its small T03 EV, confirms the good moment (and variety, Leapmotor even has a small coupe, the S01) of local EV Startups, while BYD had 3 models with record performances, besides the aforementioned Han EV (5,055 units), the Han PHEV (2,490) evil twin also hit a record score, with the two models clocking 7,545 units if added together, while the compact BYD e2 also reach a record 2,598 units, and even the Tang PHEV had its best score of the last 18 months, with 3,721 units, with these performances confirming the return to form from the Shenzhen maker.

Below the Top 20, a reference to the sucess of Geely’s Geometry C, with 1,189 units, with the Chinese maker succeeding with this hatchback, where its sedan (Geometry A) failed. A mention also to the ramp up of the Great Wall Ora R2/White Cat, that delivered 1,651 units, while the recent SAIC Roewe ER6 EV sedan is also ramping up fast, having reached 1.124 units last month. 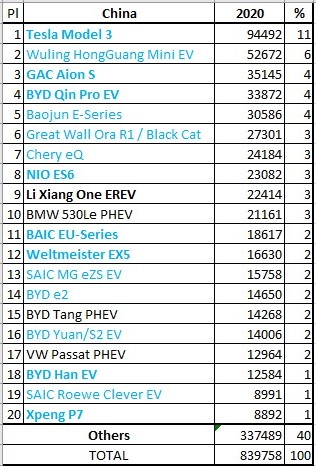 Looking at the 2020 ranking, if the Model 3 is the undisputed leader, below it, the Wuling Mini EV is running away from the rest of the pack and has already consolidated its runner-up spot, a nice start for next year's Best Selling EV in China.

This highlights the latest trend in China, City EVs are returning to the spotlight, not only with the Wuling EV, but also the #5 Baojun E-Series, the newly called Great Wall Ora Black Cat in #6, and the Chery eQ that climbed to #7 in October, thus making 4 City EVs in the Top 7

But it weren’t only City EVs rising in the table, as the local EV startups continue climbing positions, with the Li Xiang One yacht large SUV rising to #9, and becoming the Best Selling PHEV in the table, by switching positions with the BMW 530Le.

The much hyped XPeng P7 had reasons to celebrate, as the sedan joined the table, in #20, while BYD and SAIC also had a positive month, as the BYD Han EV climbed to #18 and the Tang PHEV jumped two spots, to #15, and the Shanghai-based maker saw the small Roewe Clever EV join the Top 20, in #19, and the MG ZS EV crossover going up to #13.

Below the podium, the race is tight, SAIC (7%, up 1% share) is now 4th, overcoming the #5 GAC (6%), while Volkswagen (5%, down 1% share) fell from 4th to 6th in just one month, the German maker needs desperately those ID.4's to start flooding the market, because the remaining line up is already falling behind.