November saw the Dutch EV market stay in full charge, with the 9,910 units representing the market's best score ever, if we exclude the December months, that are prone incentive-derived year end rushes.
So...will this December post a new record performance?
The PEV market share jumped to 30% (23% BEV) in November, pulling the 2020 plugin share to 18% (14% BEV), this time PHEVs were the main driver of growth, jumping 450% YoY, to 2,350 registrations, the category best result in this market since December 2016, when it was still benefiting from significant incentives.
Still, the BEV/PHEV technology sales split remained at 75% BEV, 25% PHEV, which together with the current volumes growth, it shows a healthy behavior, on its way to become the second market, after Norway, where BEVs are the new normal. 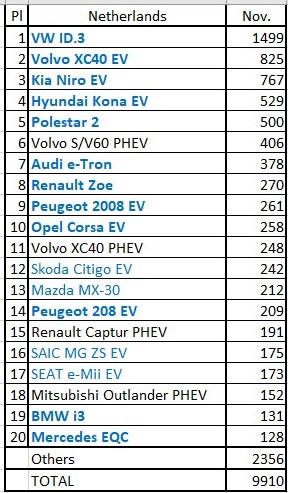 Looking at last month best sellers, the VW ID.3 won it again, with the German EV being also #1 in the overall market, so the Volkswagen new model could to be the main candidate for the 2021 Best Seller title...In the overall market.
But the event of the month was the impressive landing of the Volvo XC40 EV, with an amazing 825 units, propelling it to the runner-up spot in November, so depending if this performance has continuity, the Belgian-Swede EV could be a dark horse in this market next year.
The Kia Niro EV was 3rd last month, registering a record 767 units, being its third 700-something performance in a row, so it seems Kia's production (or is it demand?) is maxed out for the moment.

Outside the Top 3, there were two other good news for Volvo, with the S/V60 PHEV reaching #6, with 406 registrations, the twins best result since December 2016, while in #5 we have that honorary and full EV Volvo model, the Polestar 2, with the Sino-Swede scoring a record 500 deliveries, making 3 Volvos in the Top 6...
Another model showing strong results is the Peugeot 2008 EV, with the French crossover benefiting from PSA's production ramp up to reach 261 deliveries in November and the 9th position.
On the PHEV side, besides Volvo plugin hybrids, the only other model shining was the Renault Captur PHEV, with a record 191 registrations, while on the second half of the table, we should also mention the tiny SEAT e-Mii EV (aka the Spanish twin of the VW e-Up) scoring a best ever 173 deliveries and joining the Top 20 table, while in #20 we have the Mercedes EQC, that after a looong production ramp up, is finally ready to join the Best Sellers table, having scored a record 128 deliveries in November.
Outside the Top 20, we should mention the strong landing of the FIAT 500e, with its first 100 units, so we could have here another contender for a Top 20 position in 2021. 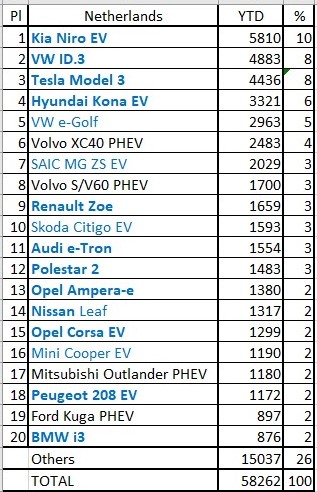 Looking at the 2020 ranking, the VW ID.3 surpassed the Tesla Model 3 and is the current runner-up, but because the Californian is having a strong high tide in December, expect it to not only surpass the German hatchback in the last stage of the race, but also overcome the the current leader Kia Niro EV and win the 2020 Best Seller title in December.
Another model climbing positions is the Hyundai Kona EV, now in #4, but the Climber of the Month was undoubtedly the Polestar 2, that jumped five positions, to #12, while its Volvo relatives S/V60 PHEV twins were up to #8, highlighting the good moment of the Swedish brand, that will have a 1-2 win in the PHEV category this year and might even be the only two plugin hybrids on the table by the end of this year.
On the second half of the table, the Audi e-Tron was up two positions, to #11, consolidating its status as the Best Selling Luxury model in this market.
In the manufacturers ranking, Volkswagen (14%) is the leader, followed by Kia (12%), while Tesla (9%, down 1%), was surpassed by Volvo (11%, up 1%), with the Swedish maker currently being the Bronze medalist.
Expect Tesla to recover the podium position in December, maybe even reaching Silver.
Published by José Pontes at December 17, 2020