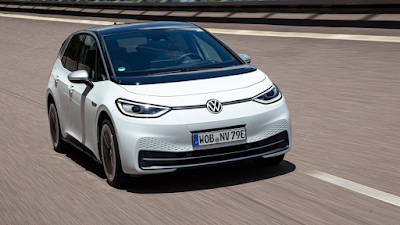 Despite having the overall automotive market in the doghouse (-14% YoY), Europe's passenger plugin market is on fire, having registered a record 166,000 registrations in November (+198% YoY), placing last month plugin share at 16% share (8% BEV), helping numbers to rise 123%, to over 1 million units, pulling the market into the...Disruption Zone, as the 2020 PEV share crossed north of 10% mark (5.4% for BEVs alone), so we can say with some certainty that part of the fall on the overall market has more to do with the disruption provoked by plugins than Covid-related issues. So, let the games begin...
...And let's not forget that December should bring also another record month, so we should see some 15%-plus 20% market share in the last month of they year...
Looking back, imagine that in January i was feeling adventurous by predicting 6% plugin share at the end of this year....after all, 2019 ended with 3.6% (2.2% BEV), which was already over 1% above the 2018 market share (2.5% PEV share)...Oh, how times have changed!
So...Will we see the plugin share hit 20% in 2021?
BEVs are running fast (83.512 units, +182% YoY), but PHEVs are going faster (+217%), with these last ones hitting new record month (82,743) for the second time in a row, pulling the BEV/PHEV breakdown to parity between both technologies, although YTD, plugin hybrids are still below (47% vs 53% share) fully electrics.
Last month Best Seller was the Renault Zoe, that managed to beat the VW ID.3, but December should be all about the race between the Tesla Model 3 and the VW new EV, as i believe both models are going to have a deliveries high tide, with Volkswagen trying to out-Tesla the US carmaker.
This podium is also a sign that the plugin market is merging with the major trends of Europe's overall automotive market, as November's Top 2 (ID.3 and Zoe)  are the same as the longtime two Best Sellers in Europe (#1 VW Golf and #2 Renault Clio).
Looking at November Top 5 Models:
#1 Renault Zoe – November was another good month for the French EV, with 9,953 deliveries of the Renault model, with the maker going all in and milking its EV until the last drop, in order to keep five-digit scores until the end of the year and recover the European Best Seller title. Last month, the main market was Germany (4,287 units), followed by France (2,944), with Italy (555 units) and the UK (450) also helping along. In December, expect the Zoe to end in 3rd, behind the high tide Tesla Model 3 and VW ID.3, but the 20,000 units advantage that it has collected throughout the year, should be enough to keep the YTD leadership and become the 2020 Best Seller in Europe.
#2 Volkswagen ID.3 - The much antecipated German EV wasn't able to win the November trophy over the Renault Zoe, delivering just 8,496 registrations, which might look underwhelming, but then again, it could be Volkswagen downplaying in November, in order to have a surprise high tide in December, as i suspect it will happen. The first MEB-platform based EV had its main markets in Germany (2,439), the Netherlands (1,485), Norway (986), and Sweden (773). Expect VW's new baby to become a familiar face in the medal positions, running with the Tesla Model 3 for the December Best Seller title.
#3 Hyundai Kona EV – Hyundai's star EV seems to have stabilized at 5,000-plus performances, as the 5,375 deliveries in November can prove. With the upcoming Ioniq 5 BEV  compact crossover said to be a small revolution in the EV World, one wonders if the Kona EV won't suffer from the new internal competition. Unless Hyundai lowers its price...But enough of futurology, and back to last month performance, Germany was the best market for the Hyundai nameplate, with a record 2,474 deliveries, followed by the Netherlands (529 units), Norway (355) and France (344).
#4 Tesla Model 3 - Last years Best Selling EV in Europe delivered 5,014 units, which while is not a record for a second-month-of-quarter performance, is not too shabby either, meaning that the Tesla midsizer seems to have (finally!) found its cruise speed. The sports sedan main markets in November were Germany (1,617 deliveries), the UK (900 units), France (501) and Switzerland (356). Expect the Model 3 to have another high tide in December and win next month Best Seller title, but it will have to look over its shoulder and check where the VW ID.3 is, as the unassuming hatchback is looking to steal the show from the Californian in the last minute.
#5 Mercedes A250e – Thanks to competitive pricing (for a Premium brand), usable electric range (64 kms / 40 mi WLTP), and even CCS availability, the compact Mercedes has become the star player in the PHEV field, with November registering 4,517 units, with its biggest markets being Germany (1,612 units), closely followed by the UK, with some 1,200 registrations, while France (443 units, new record) is the 3rd largest market at some distance of the first two. Will this be the 2020 PHEV Best Seller? 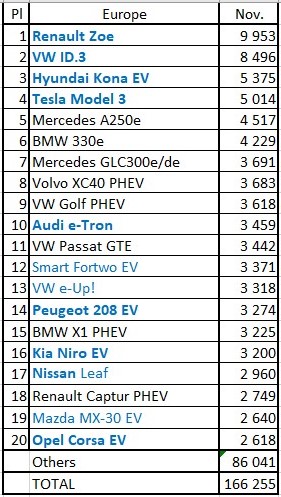 Looking at the remaining November Best Sellers, the BMW 330e was #6, with its second record score in a row, in this case 4,229 deliveries, most of them being the new station wagon body, a real no brainer in wagon-loving Europe, that others have already been doing for years (Volvo and Mercedes are just two examples).
In a record month, several models hit their personal bests, like the fresh (now in 8th Generation body) VW Golf PHEV, that scored 3,618 units, beating the nameplate's long running record score, set in December 2015, so expect the compact plugin hybrid to be a strong candidate to the 2021 Best Selling PHEV title, so we might even see Volkswagen collecting both the BEV and PHEV Best Seller titles next year...
Another known model on the rise is the #12 Smart Fortwo EV, that scored a record 3,371 registrations in November, so despite the underwhelming specs, the tiny EV is growing fast, highlighting the latest trend in Europe: City EVs are rising, besides the Fortwo EV record score, its slightly longer sibling Forfour EV also hit a best ever performance (984 units), like the VW e-Up (3,318), while the new Renault Twingo EV (1,009) and Fiat 500e (1,285) are ramping up deliveries, with the Italian model in particular having potential to be Top 20 material.
The Smart record performances highlight Daimler's rise to stardom, as the German Group continues to have records galore every month, with 7(!) Mercedes plugin models (B-Class, E-Class, CLA, GLA, GLE, EQC, EQV) hitting record scores.
A reference also to the #19 Mazda MX-30, despite being imagined like a niche model, the truth is that as Mazda's only available EV, it will have to sell in large numbers, in order to lower the maker CO2-related fines, so the quirky crossover is being registered in surprising volumes, with November representing a new record, with 2,640 units.
Outside the Top 20, a reference to the 2,212 registrations of the Peugeot 2008 EV, with the French carmaker already having the small 208 EV in cruise speed, now it's time to ramp up the electric crossover production, speaking of compact crossovers, FCA is ramping up the production of the Jeep Compass PHEV, having registered 1,466 units last month, while Volvo has finally launched the BEV version of its XC40 best seller, with 1,311 deliveries in its first month and Land Rover has done the same with the PHEV versions of the posh Range Rover Evoque (1,411 units) and family-friendly Discovery Sport (721). 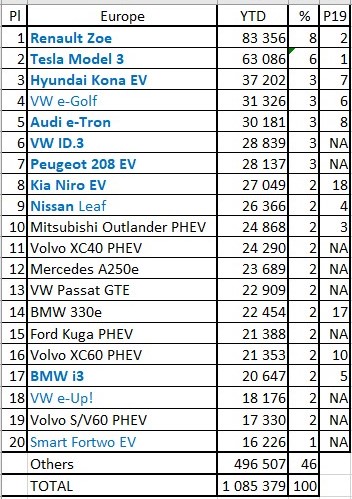 Looking at the 2020 ranking, the podium positions seem already decided, so the big news is the jump to 6th of the VW ID.3, that should climb a few more positions in December, probably ending the year in #4, just in time to surpass its e-Golf antecessor.
A secondary effect of the ID.3 rise, is that we now have a fully BEV Top 9, followed by 7 PHEV models, which makes the table look like there is an "A" League, made only by the best BEVs, and a "B" League, with the best PHEVs.
On the "B" League, the Mitsubishi Outlander PHEV managed to keep the category leadership, but it will be hard for the Japanese SUV to keep ahead of its most direct competitors in the last stage of the race, as the #11 Volvo XC40 PHEV (and #13 VW Passat GTE, and #12 Mercedes A250e, and #14 BMW 330e...) are all running at a faster pace than the veteran Japanese, so at least some of them should surpass the Mitsubishi SUV in December, and discuss between themselves the PHEV title in the final days of 2020. Should the Outlander PHEV lose the 2020 title, it will be an historic moment, as it will be the first time since 2012 that the Outlander isn't the Best Selling PHEV in Europe!
Among them, the one i think will take the PHEV Best Seller title is the Mercedes A250e. Any other bets?
Looking at the remaining position changes, the VW e-Up was up one spot, to #18, while we have a return to the Top 20, with the Smart Fortwo EV showing up in #20.
In the brands ranking, Volkswagen (11% share, up 1%) has gained precious ground over the runner-up Renault (9%), that now is more concerned in keeping the 2nd position away from the #3 Mercedes (9%), that profits from its strong (and long) lineup to gain ground over the French brand.
Outside the podium, Tesla, BMW and Volvo, all with 7% share, are looking to join the podium in December, only Tesla has real chances to do so, thanks to the expected end of quarter high tide.

Tesla's midsize sedan sales are in another galaxy, and although it has seen its sales drop a worrying 36% YoY last month, the December high tide should compensate it.
In fact, Tesla's midsizer won't have significant competition in the near future, at least until its Model Y sibling lands, as the recently arrived Polestar 2 (1,336 units last month) seems to have already peaked out this year, and with expansion plans only set to be enabled in 2021, don't expect much more from the Sino-Swede.
The upcoming Ford Mustang Mach-E production levels are still a question mark, and as for the BMW iX3, i believe the Bavarian maker will already be happy if it sells half of the Mercedes EQC...Which, by the way, has beaten once again its personal best, having delivered 2,343 units last month, so it seems the Mercedes midsize SUV slooow ramp up still hasn't ended, and should continue in the following months.
As for the remaining podium, the Jaguar i-Pace profited from the new, cheaper, EV320 version, to jump its sales to 1,916 units, the Sports SUV best score in 23 months and a 89% jump YoY. It seems the Austrian-built Jaguar still has some tricks (ahem, lowering its outrageous high price to something more palatable...) up its sleeve to fight the newcomers.

The e-Tron domination is unquestionable and continues to grow, with the Big Audi scoring 3,459 units last month, with its sales jumping 162% YoY, considering the already significant sales volumes of the Belgian-made Audi, one wonders for how long will this kind of growth rates will be sustained, and when will the peak e-Tron moment arrive...With Audi already discounting its big EV, expect this moment to come soon.
With the #2 Porsche Taycan (2,151 units last month, a new record) accelerating its sales once again, the main interest layed on the 3rd spot, where the luxury van with windows Mercedes EQV (474 units) has managed to beat both flagship Teslas, with the Model X having 293 deliveries in November and the Model S some 287 units, with the higher riding Tesla witnessing a steep fall of 45% YoY, which should worry Tesla, as steep drops have been the norm for the big Teslas throughout the year, and while this is still a rarefied market, all it took was Mercedes to convert the Passenger version of a Van into electric drive, which basically it's what the EQV is, to beat both the Model S and X.
In 2021 there will be several models landing (Audi e-Tron GT, Mercedes EQS, BMW iNext...), that have potential to beat the Porsche Taycan saleswise, making the 2021 race all the more interesting to follow, but should also render the Big Teslas even more irrelevant. Something needs to be done...
Published by José Pontes at December 29, 2020