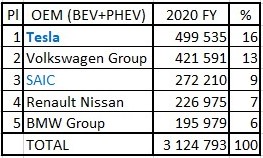 If we gather plugin sales by Automotive Groups, Tesla ended the year ahead, with 16% share, 1% less than a year ago, which nevertheless is still a small feat all by itself, considering the intensive diversification process that the EV niche is now having, could have eroded more significantly its market share.
Tesla's current domination is however being threatened by the Volkswagen Group, that jumped from 6th in 2019 to the current 2nd spot, with its share jumping from 6% in 2019, to the current 13%.
More importantly, the German conglomerate reduced its distance to the leader from 227.000 units in 2019 (368k vs 141k), to the current 78.000...Inclusively, the VW Group outsold Tesla in the last quarter of the year, by registering some 191.000 units, while the Californian maker had some 183.000 deliveries.
Will this mean that VW will beat Tesla in 2021? I think it will be closer than this year, but i believe Tesla will still have the upper hand, but for 2022...All bets are on.
In 3rd place we now have Shanghai Auto, that shooted from #7 in 2019, to the Bronze medal, having seen its share jump from 6% last year to the current 9%.
But unlike Volkswagen, that had been stable at the runner-up spot since the beggining of the year, by the end of Q3 2020, the Chinese Group was still outside the Top 5, but thanks to an amazing Q4, where it had an incredible 162.000 units, it jumped to the last place of the podium, this result was much due to the thundering success of the Wuling Mini EV, that was responsible for 44% of all of SAIC's registrations. If things go on like this for the Shanghai maker in 2021, then it could become a sort of dark horse and get in the way of the much announced Tesla vs Volkswagen duel.
Regardless of what will happen in 2021, the big gainers of 2020 were the Volkswagen Group and SAIC, that counted together, gained 10% share this year.
Both the #4 Renault-Nissan Alliance and the #5 BMW Group lost 1% share regarding last year, but while the German OEM repeated the 5th spot of 2019, the Alliance lost one spot regarding the previous year, unable to resist the rise of SAIC.
Regarding the Q3 2020 ranking, we witness the disappearance of the Hyundai-Kia Group, that dropped from #4 then, to #6, despite record sales. 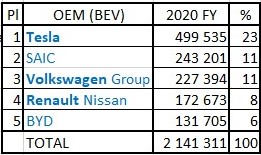 Looking only at BEVs, Tesla repeated the 2019 title, with 23% share, the same score it had in the previous year, a small feat considering the current diversification process.
The Silver medal changed hands a few times this year, first we had the Renault Nissan Alliance in the runner-up spot, but on Q3 the VW Group took Silver, only to lose the 2nd spot on the last quarter of the year to SAIC, that thanks to the success of its Wuling Mini EV, it came out of the Top 5 into #3 in Q3, having surpassed the German conglomerate in the last quarter.

Still, it was a positive year for the Volkswagen Group, as it jumped from 6th in 2019, with just 5% share, to the last place of the podium, with 11% share.
Same story for SAIC, that jumped from #5 in 2019, with 6% share, to the runner-up spot, with 11% share, confirming these two Automotive Groups (SAIC and VW Group) as the winners of the year, as these two counted together earned 11% share in 2020, and the 22% of both come close to the 23% of the leader Tesla.
The Renault-Nissan Alliance was #4, with 8% share, which, funny enough, are exactly the same scores that the Alliance had in 2019.
The same can't be said regarding BYD, that was down from #3 and 9% share in 2019, to the current 5th spot and just 6%, although the Chinese Group has been recovering lately, climbing to #5 in the last quarter of the year.
Comparing with the BEV+PHEV table, the big defeated is the BMW Group, that due to its heavy reliance on PHEVs, disappears from the Top 5, while BYD replaces it.
Published by José Pontes at February 04, 2021