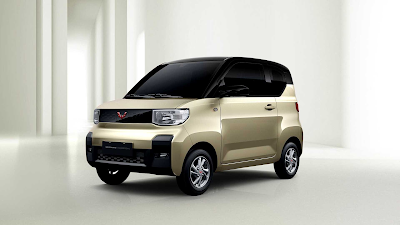 Registrations were up 112% YoY in January, to over 321,000 units, marking the 4th straight month with doubling sales, with China's market being the main drive for growth.
Sharewise, 2021 started with 5% share, already above last year final mark (4%), so we could end this this year at around 7-8%, which would mean that the global automotive market would reach the Disruption Zone already in 2022...

Last month, BEVs jumped 132% YoY, while PHEVs grew 80%, mostly thanks to the BEV-friendly Chinese market, that represented 54% of all global sales in January.
With the current surge in China, while 12 months ago we only had 2 Chinese EVs in the table, we now have 9 representatives in the Top 13 spots!

And the most amazing of them all was the little Wuling Mini EV, that thanks to another record performance (its 7th in a row), and after several runner-up spots behind the Tesla Model 3, it has finally beaten the sports sedan, winning its first monthly Best Seller trophy on a Global level.
As i previously mentioned in the China article, what started as a credits compliance model, is becoming a major disruptor in China, and SAIC might have found the Holy Grail of City EVs. And its success begs the question: When will we start to see it outside its native market? I mean, both SAIC, through MG, and GM, are well established across the world...

But despite losing the models leadership, the Californian maker actually had a good result coming from the Model Y, that was 3rd last month, with Tesla placing two models in the podium.
(Just) Outside the podium we have the full size BYD Han EV, that lost the 3rd spot by just 300 units, although if we were to add the 2.805 units of the Han PHEV, BYD's flagship would be the Bronze medalist...Better luck next time?
The BYD Han EV leads a pack of 6 Chinese EVs, between #4 and #9, 3 of them being small EVs, while the other two are the Li Xiang One barge, in 8th, which is the highest placed model of the Chinese startups, and also the leader of the PHEV category, and the GAC Aion S sedan, that last month scored its best result in over a year.
The best representative of the Legacy OEMs were the #10 BMW 530e/Le and #11 BMW X3 PHEV, that that helped by their Chinese volumes, have managed to keep the pace with the best selling Chinese EVs.
A mention to SAIC's models in the table, with the small Roewe Clever EV, in #9 with 5.176 units, and the #12 Roewe eRX5 PHEV, with 3.779 units, both hitting record results, highlighting the good moment of the Shanghai maker.
Another model scoring a record result was the Xpeng P7, that had 3.710 units last month, just beating the once leader Nissan Leaf, that started the year in #14. 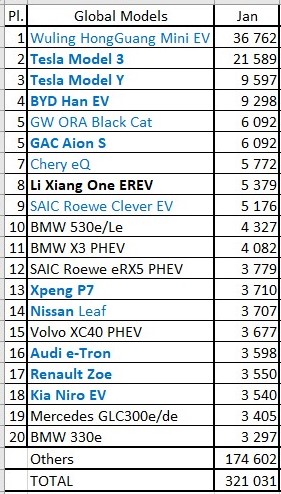 Manufacturers: SGMW wins January
January saw SGMW win the monthly Manufacturers title, thanks to some 39.000 units, mostly thanks to the resounding success of the Wuling Mini EV.
Tesla was pushed to the Second Spot, but overall it was a good month, with tripling sales YoY, and the margin to the #1 is not very significant for now (5.833 units), and if February might not see it return to the leadership, the #1 spot should become theirs by March,  but the most striking aspect of last month Manufacturers table is return to form from the Chinese makers, that have 3 brands among the Top 5, besides the aforementioned SAIC-GM-Wuling joint venture, we also have BYD in 4th and SAIC in 5th.

BMW managed to start the year in 3rd, thanks to several good results across its (long) lineup, while its arch rival Mercedes was #6, some 6.000 units behind, with the three pointed star brand starting the year as the second best selling Legacy brand, just ahead of Volkswagen(!), but expect this last one to jump in the table by March.
Coming down in the table, a mention to the Chinese Startups, with 3 of them already in the Top 20, with NIO leading the pack, in #14, ahead of Renault(!), thanks to a record 7.225 units, with Xpeng in #17 and Li Xiang in #19, so it seems they have surpassed their infancy survival tests, and are now ready to scale up production (and portfolio).

The tumble of the month went for Hyundai, that dropped from #11 last year, to #20, with only 4.623 deliveries. That Ioniq 5 is now needed more than ever...
With February said to be a slower sales month in China, expect a couple of Legacy Brands to rebound in the Top 20 next month.
Finally, if we look at Shanghai Auto as an OEM (SAIC+SGMW), the Chinese maker is in a commanding position, with a commanding 17% share, 7% above Tesla (10%) and 8% above the VW Group (9%), so these last two will have their work cut out for them in the next few months, if they want to remove SAIC from the top spot.