After a rough start of the year, the second half of 2020 has become a records fest, with 3 record months in the last 4, with December being one of them, with over half a million registrations.
With plugin registrations jumping 105% last month, it was the first time since 1411 2011 that we had 3 consecutive months (October, November & December) of doubling sales, with is a great sign for what 2021 could be.
While BEVs were a hot item last month, jumping 81%, to a record 407.000 units, PHEVs were even hooter, shooting 205% in December, allowing them to end the year with 31% of plugin sales, up 5% from the 26% of 2019, giving credit to those that say that PHEVs will still be around for a while.
December's brilliant result has allowed the the full 2020 numbers to increase 41% regarding 2019, a step above the 2019 growth rate (+10%), and an (almost) return to the 50%-ish growth rates that plugins have experienced historically, since start of the Third Age of the Electric Car started, back in 2011.
With the overall automotive market in the red (-14% in 2020), added to the amazing recovery of plugins on the second half of 2020, the December PEV share jumped to a record 6.9% share (4.9% BEV), pulling the final 2020 plugin share to 4% (2.8% BEV), results that are well above the 2.5% plugin share (1.9% BEV) of 2019.
The future will depend much on the development of the pandemic and the seriousness of the economic crisis, but expect plugins to weather the storm better than the overall market, increasing its share on the way, to some 6-7% in 2021, and in 2022...The Disruption Zone will happen, with the first two-digit scores.

The high tide mode Tesla Model 3 won another monthly Best Seller title, with over 65.000 deliveries, a new record, while the rising star Wuling Mini EV scored another record 33.489 units last month, its 6th record score in a row, although it seems the tiny EV seems to be hitting a plateau of 30.000-something deliveries, which could be related to production constraints or reaching its demand limits.
The surprise of the month came in Third, with the VW ID.3 jumping to the podium for the first time, thanks to a record (and somewhat unexpected) 28.000 registrations in December, such high number could be related to the EU's CO2 emission compliance rules, so we will have to see if the German hatchback will be able to replicate this performance soon...Say, in March?
In the remaining positions of this Top 5 we have the #4 Renault Zoe and #5 Tesla Model Y, that have beaten their personal records too.
Just outside this Top 5, a mention to two other EVs scoring five-digit scores, with the Hyundai Kona EV scoring an unexpected 12.000 registrations, which could be its last record score in a long time, considering the upcoming arrival of the much awaited Hyundai Ioniq 5, that could seriously hamper the sales of its smaller sibling, while the 7th model above the 10.000 registrations in December (a year ago, only two models, the Tesla Model 3 and BAIC EU-Series, got there) was Great Wall's ORA Black Cat (formerly known as the R1), that has received a second youth with the renaming. A model to follow closely in 2021... 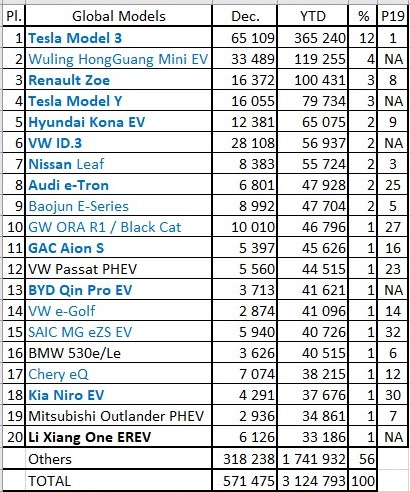 On the final 2020 table, the Tesla Model 3 won its 3rd consecutive Best Seller award, with no real competition in sight, so it looks 2021 could be its 4th title in a row, which would equal the number of titles that the Nissan Leaf has won so far (2011, 2013, '14 and 2016).
The Wuling Mini EV secured the Silver medal, beating BAIC's EU-Series yearly score (111k) and becoming the Chinese EV with highest score in one year, while also winning the Rookie of the Year title, ahead of heavyweights like the Tesla Model Y or VW ID.3.
The Renault Zoe earned the Bronze medal, its first podium finish ever, which says a lot about the progress of the French EV, that has been around since 2012.
Something its Japanese relative, the Nissan Leaf, can't say the same, currently the most medalled EV in active service, with 7 podium positions, 4 of them as Best Seller, was down to 7th in 2020, having seen its sales drop by 19% regarding 2019, in an overall recovering market.
If some go down, other rise to the occasion, like is the case of the Tesla Model Y, that started its career in 4th, missing the opportunity to have two Teslas in the podium, a feat that has been eluding the Californian maker since the beggining. Or anyone else, for that matter...
In December, the Climber of the Month was the VW ID.3, that jumped from #19 in November to #6 in the last stage of the race, allowing it to join the Top 10 and become the Best Selling plugin in its class, but more on that later...
Other position changes benefited small Chinese EVs, with the Baojun E-Series climbing to #9, the Great Wall ORA Black Cat jumping to #10 and the Chery eQ reaching #17, underlining the most recent trend in China: The Rise of City EVs. But more on that later...
On the PHEV side, the 2020 Best Seller trophy went to the VW Passat PHEV, that thanks to strong results in both China and Europe, allowed the German midsizer to win the category title, a first for the German conglomerate.
Interestingly, the Best Selling PHEV was only #12 in 2020, while in the previous year, we had 2 plugin hybrids in the Top 10 (BMW 530e/Le and Mitsubishi Outlander PHEV), and this despite PHEVs had increased their share in 2020, this can be explained by the much greater model diversity currently on offer, with makes the sales to be distributed more evenly among the several models on the market.
On the second half of the table, the Peugeot 208 EV was ousted from the table by the Li Xiang One, with the startup model reaching the #20 position right in its first year on the market, which could be a good omen for the future.
Finally, outside the Top 20, one model deserves a special mention, with the rising BYD Han EV (29k units in 2020) ending the year on high note (9.000 units!) so the flagship BYD is looking to become a familiar face in the 2021 table. Inclusively if we were to add the PHEV version to the tally, the extra 11.500 units would allow the big BYD to be #16 this year, ahead of the BMW 530e/Le and only behind the 2020 Full size Best Seller, the Audi e-Tron. Not bad for a model that only landed during the summer...But more on that later.
Manufacturers: Tesla 3-peets the title
The high-tide mode Tesla managed to win another monthly Best Seller title in December, and with a record to boot (91k), while Volkswagen has managed to beat the SGMW joint-venture for the first time since September, while Mercedes was pushing the pedal to the metal in December, in order to comply with the EU's CO2 emission rules, allowing it to be #4 in December, with an amazing 32.000 units.
After a walk in the park in 2020, Tesla repeated its 2018 and 2019 Best Seller titles, with the Califonian now having 3 titles in the bag, as much as Nissan (2011, 2013 and 2014) and BYD (2015 to 2017), so it looks that Tesla will go ahead of those two in 2021, as it looks no one is in position to challenge Tesla for the 2021 title.
Volkswagen won its first podium position in 2020, which is not bad (it's actually quite good), considering they were still in the Year Zero of their Plan to Rule the EV World, while a recovering BYD won its 6th podium position in row, even if it lost the runner-up position it had in 2019, to a rising Volkswagen.
The SGMW joint-venture was up one spot in December, to #4, relegating BMW to 5th, just ahead of a rising Mercedes, of the German Three Marys (Audi, BMW, Mercedes), the Three-pointed-star looks to be the most dynamic in the present days, and with several models to launch in 2021, just BEVs, we will have the EQA, EQB and EQS, expect it to beat the other two by a reasonable margin, while trying its luck for a Top 5 spot.
By the way, in a record month, there were record galore, 16 in this Top 20, to be exact, besides the aforementioned, Shanghai Auto (SAIC) scored over 20.000 units in December, allowing it to climb one position, to #10, highlighting another great month for the SAIC Group (in the same month, SGMW was up to #4), while Chery was up to #18, thanks to a record 8,962 registrations.
Even Nissan had a good month, with the 8.590 units of December being its best score since November 2018, pulling the Japanese brand to #14, just 7 spots below its #7 position in 2019...
Interestingly, Porsche (5.662 units, new record) and NIO (record 7.007 units) have kept their Top 20 positions, a small feat for what are niche brands. 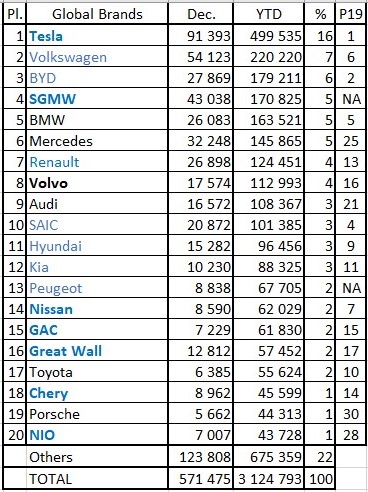 Here's a look at the 2020 segment winners:
A segment / City Cars - This is all about Chinese EVs: The Wuling Mini EV is miles ahead of the competition, followed by the Baojun E-Series and Great Wall ORA Black Cat. Which says a lot on who will be in the pole position when (and if) autonomous pods become a thing. Back to 2021, the only non-Chinese EV with any fighting chances to run with the best will be the Fiat  500e, that plays in a different, more Premium-oriented, class;
B segment / Subcompacts - Renault Zoe (100k units), followed by the Hyundai Kona EV at some distance, while in 3rd we have the Peugeot 208 EV, that with 32k deliveries, it was somewhat below expectations. Maybe the main difference between the two French arch-rivals has to do with the level of commitment of each maker regarding EVs?
C segment / Compacts - The Volkswagen ID.3 (57k) stole the show in the last stage of the race from the usual winner, the Nissan Leaf (56k). Another change regarded the GAC Aion S, that profited from the career end of the VW e-Golf to surpass the German EV and take the category Bronze medal;
D segment / Midsize - Tesla Model 3 (365k). Followed by another Tesla (Model Y - 80k). Far from these two, we have the VW Passat PHEV (45k). And if we exclude PHEVs, then the 3rd best becomes the Jaguar i-Pace, that just managed to beat the Mercedes EQC (17k vs 16k), with the high priced Sports SUV benefitting from a peak in December (record 4.868 units) to surpass the German SUV.
E/F segments / Fullsize - Audi e-Tron (48k), is the new Top Dog, ahead of last year winner BMW 530e/Le (41k) and the rising Li Xiang One (33k). And if we were to consider the BYD Han EV and PHEV versions counted together, then we would have the big BYD with the Silver medal, which considering that the large sedan only landed in the summer, it is an awesome performance, making it the strongest candidate to the category 2021 title. Counting only BEVs, then we would have the Tesla Model X (33k) in 2nd, followed by the BYD Han EV (29k), that would stay ahead of the Tesla Model S (22k) and the niche Porsche Taycan (20k). For 2021, with the e-Tron suffering from internal competition (Audi Q4 e-Tron...), the title is very much open, if the Model X is expected to rebound (48k?), the first full year of the BYD Han EV could propell it to some 50k-60k in the whole of 2021, and don't forget the Li Xiang One, that has been a sort of Dark Horse, doing its own thing without much noise, so expect a 3 horse race in what promises to be one of the most exciting races in 2021.
Published by José Pontes at February 02, 2021