Toyota loses ground to Nissan
In October, some 3,400 units were registered in the Japanese PEV market, down a staggering 45% YoY, mostly due to the fact that the new Nissan Leaf had its first sales month 12 months ago, scoring a record 3.629 units then, something that the Nissan model couldn't replicate this year, having delivered 1,675 units, which was still the second best October in the nameplate history, while the Toyota Prius PHEV was down 53% YoY, without any other reasonable explanation beyond the fact that demand is slowing down.

Is the leader Nissan Leaf stealing sales to the Toyota PHEV?

It sure seems so, as the Nissan Leaf, is seeing its sales nearly double, placing the Nissan BEV on track to beat last year record of 26,734 units, set by the Toyota Prius PHEV.

As for the third significant plug-in model in Japan, the Mitsubishi Outlander PHEV, sales are up this year (+34% YoY), mostly thanks to the recent restyle, that brought updated specs, but still, we are far from the numbers scored in 2015, when the nameplate hit 11,000 registrations.
Below the Big Three domestic players, the only other maker with a significant share is BMW, with 5%. 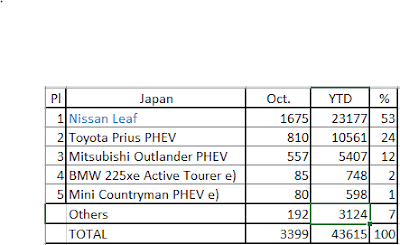