We start October with Sweden, the local plug-in market was up 19% YoY, with 2,625 registrations, with the yearly tally growing 48% to 22,941 units, and the 2018 PEV Share going up to a record 8%, thanks to the 11,4% share of last month. With the all time record now beaten, one wonders if the final 2018 PEV share can reach the 10%. It will be hard, but one thing is certain, two-digit monthly results should become the norm from now on…

As expected, the growth engine were in all-electric models, that grew 122% YoY, while PHEVs dropped (-1%) in October, their slide first in 18 months.

Looking at last month Best Sellers, the Mitsubishi Outlander PHEV is profiting from the recente updates to be back at the drivers seat, with 327 units, followed by the Kia Optima PHEV (313 units, PB).

The Renault Zoe is finally taking off in Sweden, and ended the month in Thinrd, with a record (the fourth(!) on a row) 299 registrations. How high will the French hatchback sales reach?

Another telling tale of the changing environment, it that we have two BEVs on the Top 5, and none are Teslas, with the Nissan Leaf hitting the Fifth Spot, thanks to 240 deliveries.

On the other hand, the once all-conquering VW Passat GTE (and current YTD leader) had its worst performance in 15 months, with 259 units. Problems for the Volkswagen Mothership?

Looking at the 2018 ranking, several changes happened, the main news were the Mitsubishi Outlander PHEV returning to the podium, in #3, while the BEV Best Seller race is hot, with the #7 Renault Zoe surpassing the Nissan Leaf cousin and being now the holder of the trophy.

Other significant changes benefitted the BMW 530e, climbing to #10 by surpassing the Tesla Model S, and with the #9 Volvo S/V90 PHEV twins in the slow lane, we might even see the Bimmer win the E-segment  Best Seller trophy.

Profiting from the new BEV-friendly legislation, the Hyundai Ioniq Electric climbed to #14, thanks to 74 deliveries.

Having PHEVs in the lineup is not enough anymore Volvo,  now you need a couple of BEVs on the mix too! 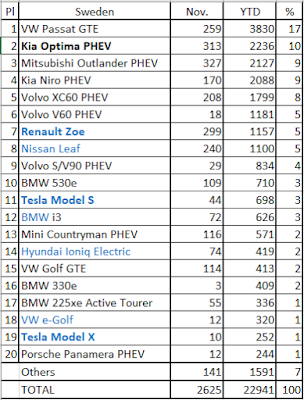