Outlander PHEV #1 in October, BMW i3 #1 YTD
The Swiss PEV market is up 19% this year, by registering some 7.300 units, placing the 2018 PEV Share at 2.9%.
In an off-peak month for Tesla, October brought a surprise Best Seller, with the Mitsubishi Outlander PHEV (132 units, new record) beating the BMW i3 that scored 113 registrations, despite this, the German hatchback is a comfortable leader, and with the new 42kWh version coming soon, it is almost certain that the i3 will win the 2018 Best Seller award, ending a 4 year winning streak of the Tesla Model S, and winning its first trophy in Swiss lands.

The Volvo XC60 PHEV climbed to #4, profiting from the off peak month of the Tesla Model X, while the Nissan Leaf is now #7, while the Smart ForTwo ED jumped two positions to #17. 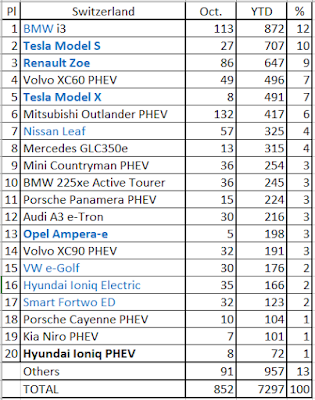