Looking at April Best Sellers, the Renault Zoe managed to outsell the Tesla Model 3, that remained in chill mode throughout the month, after a Ludicrous March, the American sedan had to be contented with the 4th spot, losing out to the aforementioned Renault model, as well as the #2 BMW i3 hot hatch and the evergreen #3 Mitsubishi Outlander PHEV.

But the surprise of the month came in #9, with the Porsche Panamera PHEV scoring 291 units, a new record for the Porsche nameplate, after the WLTP hiccup, it seems the German Sports Sedan is back on top of its form, something that provides good signs for the career of upcoming Porsche Taycan.

The German PEV market is known for close races and constant changes, and last month was no exception, first of all, the Tesla Model 3 is still the leader, but the Renault Zoe is just 43 units behind, so it will be an interesting race to follow in the coming months.

The Daimler Group had a positive month, with the Mercedes E300e/de PHEV jumping to #14, thanks to 284 deliveries, the taxi model best result in 15 months, while both Smart models climbed in the ranking, with the Fortwo EV climbing one place, to #8, thanks to 428 deliveries, while its (slightly) bigger brother Forfour EV  jumped three spots, to #12, thanks to 280 registrations, both scoring Year Best performances in April.

Outside the Top 20, we should mention the record 85 deliveries of the Jaguar i-Pace, with the British Sports-Crossover-SUV-Thingy, now in #22, just 24 units from knocking on heaven's door the Top 20.

Outside the podium, we have Hyundai and Mitsubishi, both with 7% share. 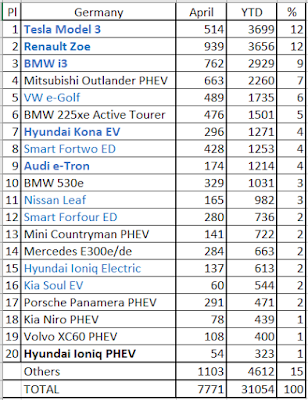 
One of the question marks around the Model 3 in Europe, regarded the impact that it was going to make on this side of the Atlantic, will it disrupt the PEV and ICE sedan market in the same way that it is doing in the US, or will it be more subdued, because it is playing away from home.


The answer is now being written, comparing the Model 3 full year deliveries against its midsize premium competitors, we can see that the local heroes are still significantly ahead, with only the BMW 4-Series close to be surpassed.


Nevertheless, in a backdrop of falling sales (midzise cars are down 11% YoY), the Tesla nameplate performance is impressive, considering that the car has given a couple of months of advance to the competition in the beggining of the year.

Also interesting to see, not all models are being affected in the same way by the arrival of the Model 3 and the overall category falling sales, while the Audi A4/A5 and BMW 4-Series are experiencing two digit drops, the Mercedes C-Class sales are flat, with the Merc model surpassing the Audi A4 and becoming the class best Seller.

This confirms what we have seen in other markets, with Mercedes resisting well to the Model 3 landing, while BMW and Audi have been suffering.
Published by José Pontes at May 17, 2019