We start this month with the Dutch PEV market, that had another positive sales month in April, with 2,520 plugin registrations, up 150% YoY, which translated in a PEV Share of 8%, pulling the year to date count to 12,944 units, and keeping the 2019 PEV share at 9%, frankly above last year result.

If we only consider BEVs, the EV share in last month was 7%, with the same value being registered if we consider the 2019 PEV share.

The Tesla Model 3 continues to lead the way, having delivered 467 units last month, a brilliant performance, considering it is the first month of the quarter, therefore, the low point in Tesla's deliveries carrousel.

Two other recent, long range BEVs, closed the podium, with the Hyundai Kona EV (371 units) and Kia Niro EV (359 units, new personal best for the second time in a row) underlining the current competitiveness of the Hyundai-Kia EVs.


A bit surprisingly, the VW e-Golf was 5th, with 216 units, a meritable performance for a model that is less than a year from being replaced by the much improved VW ID.3, that promises to pull the German maker ahead of the pack. I guess name recognition is a strong point here...

Looking at the 2019 ranking, after a memorable March, it was time to chill and take a break, with only three changes in the ranking, with the most important being the Audi e-Tron showing up in #17, having registered 55 units last month, placing it as April's Best Selling Luxury SUV.


The following positions changes happened outside the Top 10, with the Range Rover Sport PHEV climbing to#12, while the Mini Countryman PHEV had its best score so far, with 38 registrations last month, jumping two spots, to #18.

A final mention for the 34 registrations of the BMW i8, its best score ever, allowing it to be April's Sports Car Best Seller, beating even the almighty Porsche 911 (30 units).

In the manufacturers ranking, Tesla is the undisputed leader (25%, down 1%), followed by Hyundai (15%), while Volkswagen and Nissan (10%) are racing for the 3rd spot, with Kia (9%) on the lookout for a podium place. 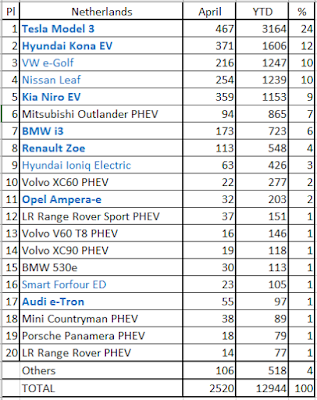 The answer is now being written, comparing the Model 3 deliveries against its midsize premium competitors, we can see that it is kicking some Premium ass outrunning all of them by a sizeable margin, although in April the BMW 3-Series managed to surpass the Model 3 (530 vs 467 units).

Maybe, maybe not, but first, it will have to catch the Swedish twins, to then focus on the Tesla. Maybe next month?