BEVs up, everything else, down.
Last month, BEVs registrations were up 25% YoY, despite the overall market being down (-20%), with every other fuel source dropping, which lead to a significant BEV (40%) share, a big departure from the 25% of April '18.
In this context, the current 58% PEV share in 2019 should grow to over 65% PEV share this year, with peak months possibly reaching 75%.
The fuels mix is showing BEVs as the standard choice (40%), while every other fuel is falling significantly, like petrol dropping to 20% share (26% a year ago), or diesel being down to 18%.  Even PHEVs are down significantly, to half of what they had last year, with their share in April being just 10%.

Outside the podium, the Audi e-Tron stayed in the 5th spot, with 371 deliveries, just ahead of the Jaguar i-Pace (350 units). 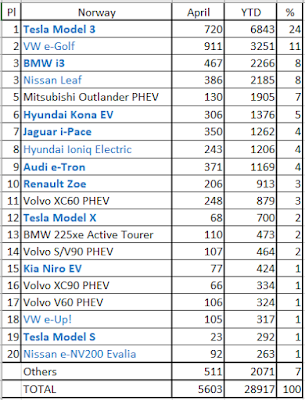 Looking at the 2019 ranking, after the seismic changes in the previous month, things were much more quiet this time, with the most important position change happening just in the 7th position, with the Jaguar i-Pace surpassing the Hyundai Ioniq Electric.
Elsewhere, Volvo had a great month, with 3 out of the 4 models climbing in the ranking, with the XC60 PHEV up one spot, to #11, thanks to 248 registrations, a new year best, while the XC90 PHEV and the new V60 PHEV also climbed in the ranking, to #16 and #17, respectively.
Finally, the #19 VW e-Up! (105 units, new year best) was up one position, to #18, surpassing the off-peak Tesla Model S, while in #20 we have a new (old) face, with the passenger version of the Nissan van e-NV200 showing up, this being a rare accasion to see this nameplate in the Top 20.
Looking at the manufacturers ranking, Tesla is uncontested leader (27%, down 3%), being followed by the previous leaders Volkswagen (12%, up 1%) and BMW (11%), while Hyundai and Nissan, both with 9%, are trying to reach the podium.

If the 2019 title seems already attributed, in 2020 i guess only Volkswagen will have a shot at displacing Tesla from the lead, and that assuming the ID hatchback production ramp up goes smoothly. 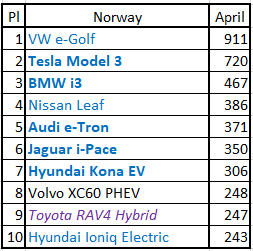 With the PEV share at 50%, the plug-in market is merging with the mainstream, breaking down sales by fuel source, we have 8 BEVs in the Top 10 and 1 PHEV (this time the honour goes to the Volvo XC60 PHEV), in the Top 10, with 1 HEV (Toyota RAV4 Hybrid, 247 units) preventing this to be another 100% plugin ranking, but the hybrid in question was relegated to a secondary place, as it was only #9.

I guess the writing is on the wall: Having hybrids (or even plugin hybrids) doesn't cut it anymore, now it is "Go BEV, or go home"