Opel Ampera-e #8 in the overall market.

The Dutch PEV market grew 51% in February, to 3,685 plugin registrations, which means that after a light hangover (-2% YoY) in January, the Dutch plugin market is back on the growth track, with last month PEV Share at 12%, pulling the year to date PEV share to 9.4%, so by March we should see it back at two-digits.

Breaking down registrations between each plugin powertrain, BEVs are back in black (+4%), thanks to a 36% growth rate last month, while PHEVs continue flying off the shelves, jumping 139% YoY...Still, BEVs are recovering their mojo, and are now responsible for 69% of the plugin market, still far from the 93% of last year, but expect them to recover ground, as the year advances.

In February, the leader Opel Ampera-e (Euro-spec Chevy Bolt) is profiting from its end-of-career sell-off, to score a second record performance in a row, this time with 647 units,
allowing it even to win a Top 10 spot in the overall market (#8, to be precise).

(It does make you wonder how successful this small hatchback could have been, if it had been properly marketed in Europe, doesn't it?)

Back at last month Best Sellers, if the 2nd place of the VW e-Golf is not surprising (insert deep discounts comment), the 3rd spot of the Kia Niro EV is, with the Korean crossover scoring a record 483 units, which could mean that Kia has (finally) more batteries available to increase the production output of its popular EV.

Another surprise is the 5th spot of the small Skoda Citigo EV, with 153 registrations in its first full sales month, which provides great prospects to the Czech EV.

In fact, if we add all three of the Bratislava-made triplets (VW e-Up, Seat e-Mii, Skoda Citigo EV), we get 226 units, which is a significant volume in the city car category.

Who would think that competitive specs and pricing would move EV metal in the cheapest end of the market? (sarcasm off)

A final mention to the 147 Volvo XC40 PHEV registrations made last month, making it the Best Selling plugin hybrid in February, is Volvo's compact SUV headed for success?

Looking at the 2020 ranking, there were plenty of changes, with the Korean models shining above everyone else, as the Kia Niro EV joined the podium, in 3rd, while its Hyundai cousin, the Kona EV, jumped 3 spots, to #4, and the good news didn't ended there, with the Kia Soul EV jumping to #15, and the Hyundai Ioniq Electric rejoining the table, in #20.

One European model climbing was the Renault Zoe, jumping 3 spots, to #12, while its arch-rival, the BMW i3, after a slow selling January, rejoined the Top 20, in #18.

We have two new faces in the table, with the Skoda Citigo EV jumping immediately to #9, while the Volvo XC40 PHEV joined the Top 20 straight into #10.

Highlighting Volvo's good moment, the S/V60 midsize twins surpassed the Mitsubishi Outlander PHEV and are now the Best Selling plugin hybrids, with the Swedish maker now having 4 models in the Top 10.

We now have 13 BEVs vs 7 PHEVs in the Top 20, and outside the table we have other BEVs trying to reach it, like the Mercedes EQC, that after spending several months in the Nine Circles of Production Hell, is finally starting to pick up pace, having registered 80 units in February, being last month the Best Selling plugin midsize SUV.

In the manufacturers ranking, Opel (15%, up 3%) is the surprise leader, while Volvo, Volkswagen and Kia, all with 11%, run for the remanining podium seats. 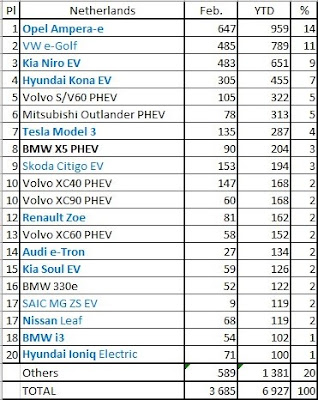