One of the most important supports for the electric car is a sufficient charging station density in order to avoid being stranded on the road and also that there should be enough charge cord outlets for everyone willing to charge, avoiding certain problems that are appearing in plug-in friendly areas.

For that reason, here are the EV markets with highest (and lowest) ratio between Plug-in Vehicles and Charging Stations:

Markets With highest ratio between Electric Vehicles and Fast-Charging Stations

These are the Top 5 markets with worst ratio, speaking of each one individually, China EV market is growing fast and the charging grid is lagging behind, which it is an enormous business opportunity for every Charging Station manufacturer present there;

The US and Sweden are a case of high numbers of ev's being delivered faster than the number of charging stations build;

Lastly, Australia is a totally different case, while the EV market is still small (Less than 1.000 units), the number of charging stations (45) is almost non-existent in such a vast country. This is a case where the Chicken (Electric car) and Egg (Charging Station) are both in very early stages...


Markets With lowest ratio between Electric Vehicles and Fast-Charging Stations

In the Top 5 markets with lowest ratio, there are three (Portugal, Ireland and Finland) where the reaction of consumers to plug-ins wasn't enthusiastic and sales remained below expectations, which meant that the grid, at least in Portugal and Ireland, is too big for the number of EV's rolling there.

Estonia is a different case, as it is the first country with a complete EV charging network with nationwide coverage, with fast chargers available along highways at a minimum distance of between 40 to 60 km, with a higher density on urban areas. The nationwide network of fast chargers were fully financed by the Estonian government in order to get Carbon Credits.

Finally, Austria is a solid case of correlation between plug-ins and charging stations market growth, with both increasing numbers at a relatively similar rate.
Published by José Pontes at August 31, 2014 9 comments: Links to this post

Despite some individual bad results (Tesla...), there were bright spots, with the Nissan Leaf reaching a new sales record, with 5.630 units sold, the Chevy Volt making its best sales month of the year (2.193 units), and the chinese duo, Kandi and Qin, breaking yet again their respective sales records.

Looking to models ranking, we can see the Volt closing in on the #4 Prius Plug-In, while the Kandi EV seems unstoppable, climbing another position to #8 and already biting the #7 BMW i3 (Less than 100 units between them). Will we see the chinese start-up reach #6 soon?

A final mention for Ford being the only manufacturer with two representatives in the Top 10, not bad for a brand that has been a bit conservative regarding ev's...

Manufacturers - Ford Climbs Again
In the Manufacturers ranking, the star of the month was Ford, #4 with 2.310 units sold last month and running away with the #4 from Toyota, which, by the way, has Chevrolet (#3 in July) breathing down its neck, thanks to the discounts second life of the Gen1 Volt.

BYD continues to improve with yet another sales record (Now at 1.325 units/month), placing Renault back on #8, with only 19 units separating them, the fight between these two is as hot as the summer days in Texas...

e) - Estimate
Questions for July
1 - Which model will be #4?
2 - How much positions will Kandi rise?
3 - Who will beat their record sales?
4 - Will Chevrolet surpass Toyota?

Besides sales by individual brands, i've decided to see how they look if we group them according to each Automotive empire Group, to make things more interesting, there are different time lapses to see, making it easier to see who is climbing or falling in the ranking.

Renault-Nissan (Or is it Nissan-Renault?), is by far the dominant force regarding plug-ins, but the next positions are more controversial, with GM being #2 by volume, but this year it has weakened a lot (Already waiting for 2nd Gen Volt?), with Cadillac unable to recover the damage of its lower priced sister.

Mitsubishi, on the other hand, is #3 in volume, but this year is selling more than its direct competition, being a strong #2 in 2014.

Toyota, historical #4, is also losing big this year, only #6 in the ranking and with no perspective of a brighter future. Fuel Cells are their thing now...

Geely, or Volvo plus Kandi, is in #7, but with Kandi selling like hot cakes, who knows where they will be heading?

In #8 we have Build Your Dreams, or BYD, that has been profiting on the sales rise in China to consolidate a Top 10 position among the Big Boys.

Chery is a consistent #9, while in #10 we have something of a surprise, the best selling german auto group here is...Daimler, thanks to the Smart storied investment in the Electric Drive version. Now that Mercedes is starting to roll off the B-Class ED, expect these numbers to go higher, and in deed they should, because BMW and Volkswagen (VW + Porsche), #11 and #12, respectively, are pressing hard the sales accelerator (Yes, VW is only #12 in the ranking, that's how late they came to the EV scene...).

Published by José Pontes at August 30, 2014 2 comments: Links to this post

With some 7.100 units sold and still without the Austria numbers, the European EV market continues in good health, having sold twice as much as last year (3.578 units in July '13).


Looking at the models ranking, the Top 10 positions continue the same, with Outlander PHEV strong in #1, ahead of the #2 Nissan Leaf and the BMW i3 looking to get close of the #3 Tesla Model S, which had an off month, selling just 398 units, as it is usual in the first month of each Quarter.

e) Estimate
Published by José Pontes at August 27, 2014 8 comments: Links to this post 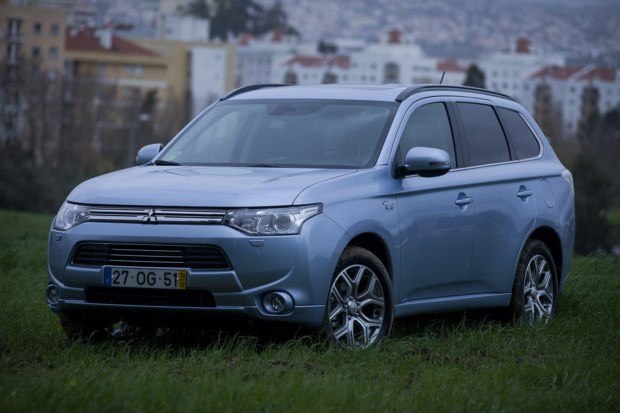 Mitsubishi Outlander PHEV: Paving New Roads For Plug-ins
After the half-hearted sales performances of the Miev family, Mitsu  had high hopes for the PHEV version of their Outlander SUV.

After a troubled start, the Outlander PHEV started to be delivered in Europe last October with a waiting list of several thousands, ending the year in #3 YTD and winning the Best-Seller title in the last two months of the year.

In Japan it stayed behind the Leaf in YTD sales, but won four monthly Best Selling titles, not bad considering it only had seven complete sales months.

But the real race for stardom started this year, while having battery production constraints, (That's why the US market is still to conquer), it is currently the Best Selling Plug-In Hybrid in the world and it's only behind the Nissan Leaf in the global EV ranking, and remember, all this while being absent from the largest EV market (USA).

While still behind the Leaf in its home market, the Mitsu SUV is beating all sales records in Europe, with some 11.000 sales this year and several #1's across the world: Best Selling EV in Holland, Sweden, Finland and New Zealand and Best Selling PHEV in: Japan, Norway, UK, Spain and Ireland, all this while pushing EV and PHEV sales to unheard levels in many of those countries.

A remarkable performance for a pretty unremarkable SUV in ICE form...

Trends in the G8 We welcome the UK market in this club, as it has become the eighth market above 1.000/ units/month, joining the other 7 (USA, China, Japan, Netherlands, France, Norway and Germany) which, coincidentally, all were above 1.000 units in July, a remarkable performance by all of them.

Besides the hyper-growing China (0,22% EV share, almost three times more than the 0,08% of last year), there are also other markets growing significantly, besides the special case of Norway (14% share vs 6% last year), in Germany, plug-ins finally started to gain traction (0,38% vs 0,23% in 2013) while the British EV market jumped from 0,16% last year to the current 0,33%, with even more growth in perspective, thanks to the recent landing of Tesla and the Outlander PHEV.

Spain had its best month of the year (168 units), so there is still hope for EV's there, while Ireland is continuing to impress (0,21% EV share vs 0,08% last year) and Estonia is looking to recover the Little Norway nickname it had in 2012...For now the EV share there is at 1,15% and now it has to compete with Iceland (2% EV Share!) for that name.

Finland is also rising (0,34% vs 0,17% last year), but the real and unexpected news is the sudden sales jump in New Zealand, where the Outlander PHEV alone represents 0,18% of the global market, no mean feat if we remember that plug-ins last year represented just 0,007% of the market...Oh, and the total EV Share in NZ now stands at 0,22%


Questions for July
1 - Will the Outlander PHEV continue to impress and add more titles to its collection?

Many didn't see this coming, but the arrival of the Outlander PHEV to New Zealand kickstarted for real the Kiwi EV market, selling 129 units to date, which means that the japanese e-SUV sells more in one month than the rest of the competition sold in years!

Even the other two contenders benefited from Mitsu success and hype, both selling now way more than in past years, with all this unexpected sales level (158 to date), the EV Share jumped to 0,22%, eons above last year 0,007% and above the score of neighboring Australia (0,02% share in '14), which registered 114 plug-ins (79 Leaf and 35 Volt) until June, despite having a global market several times larger than NZ. . .

Will the Outlander PHEV do the same stunt in Australia? Or will that role go to the upcoming arrivals of Tesla and BMW?

Thanks to this board, courtesy of David from MIA organization, we can see the sales of different types of hybrids and electric cars, and a curious number here is that the arrival of the Outlander PHEV coincided with the sinking of the Toyota Prius V and Peugeot 3008 Hybrid 4 sales, both of which can be considered as rivals of the Mitsubishi SUV, so one can say that Plug-in Hybrids will be the next stage of success for regular hybrids (Wink, wink, Toyota and Honda).

Published by José Pontes at August 25, 2014 2 comments: Links to this post