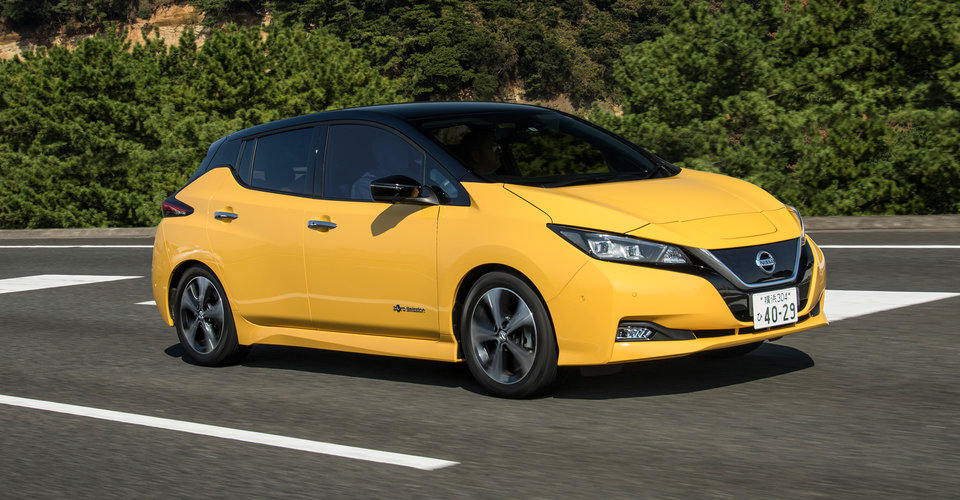 Leaf jumps to Number One

After beating the all-time record last month, the European passenger plug-in market continues pushing forward, by registering some 28,000 registrations, growing 62% regarding the same period last year, which is the highest growth rate since last August, and pulling the Year-to-date counting to over 116,000 deliveries (+45%), allowing the 2018 market share to climb to 2.1% (2.2% in April), and the good news do not end here, as BEVs (+86% YoY) grew faster than PHEVs (+43%), thus reducing the disadvantage (2,000 units) it has over plug-in hybrids in the 2018 count. Will we see all-electrics surpass plug-in hybrids in May?


Interestingly, this April saw the plug-in passenger fleet hit one million units in Europe, some 8 years after the current generation of PEVs hit the market. How many years will it take to reach the second million?


In April, BEVs continue to shine, filling the Top 4 positions, with the Nissan Leaf leading the way, followed from a far by the Renault Zoe, while the BMW i3 and VW e-Golf make the rest of the BEV Best Sellers lineup.


After a close race with the VW Passat GTE and Volvo XC60 PHEV, the Mitsubishi Outlander PHEV managed to score another Top 5 presence, while at the same time remain as the best selling PHEV.


A funny fact, the Top 6 positions in April were exactly the same as the current 2018 ranking.

#1 Nissan Leaf –The 2.0 version of the most best-selling plug-in in the world had its second full month in Europe last month and by registering 3,546 units, the Nissan hatchback won its second consecutive Best Seller of the Month award (Up 159% YoY), and with the orders list still to be satisfied, expect the Leaf to remain at around 4-5,000 units in the coming months, limited only by the Sunderland production capacity. But back to April, the main markets were Norway (997 deliveries), UK (500), France (375), Germany (279) and the Netherlands (268).

#2 Renault Zoe – April’s 2,462 deliveries meant a 51% YoY growth for the French hatchback, as Renault runs to satisfy all of the Zoe orders, now that LG has enough batteries to provide the French automaker. As for individual market performances, the domestic market did the usual heavy lifting, by registering 961 units, with other positive numbers coming from Germany (422 units), and Norway (250).

#3 BMW i3 – The German Hot Hatch sales remained positive (+18%) in April, with 1,817 units being delivered, and with the Leipzig factory currently going on full charge, do not expect the Bavarian carmaker to be worried with its angry-puppy-faced EV in the short term. Looking at individual countries, Norway is once again leading sales (524 units), with Germany (493) following suit, and France (200) also presenting a strong result. With a larger battery coming late this year (+/- 45 kWh), BMW expects the growing trend to continue well into next year, with the manufacturer already preparing the expansion of the Leipzig factory in order to accommodate the future demand.

#4 VW e-Golf – The German hatchback continues to suffer from a common disease (Not enough batteries), but despite that, the BEV Golf collected another Top 5 presence, thanks to 1,547 deliveries, up 125% YoY. Looking at individual countries, besides Norway’s usual contribution (539 units), Germany (456 units) is becoming also a major contributor. Looking ahead, expect sales to continue strong over the next 12 months, but after that, VW will probably place it in Sunset-mode, as a certain ID-thingy will already be in the oven...

#5 Mitsubishi Outlander PHEV – Solid as a rock, the Japanese SUV managed to outsell the more resourced (VW Passat GTE) and hip (Volvo XC60 PHEV) competition, thus securing another Best Selling PHEV of the Month award and a Top 5 PEV presence in April, thanks to 1,210 registrations. The Mitsubishi model continues to profit from its unique mix of space, AWD, range and affordability (40.000€), to make it popular in markets like the UK (500 units), Norway (195) or Sweden (115). Going forward, the Japanese SUV is expected to receive an update soon, so expect it to keep wearing its Europe’s Best Selling PHEV crown in the foreseeable future.

Looking at the 2018 ranking, the headline goes to the new Nissan Leaf, climbing to First Place, and displacing the Renault Zoe to Second Place, that being the only relevant change in the top positions.


Other changes in the Top 20 were the #9 Mercedes GLC350e and #10 BMW 530e, both jumping two positions into the Top 10, with another BMW also on the rise, with the 330e up two positions, to #13, all while the VW Golf GTE leaped three positions into #12, and the Kia Niro PHEV, was up one place, to #16, confirming itself as a welcome surprise, even if it continues production constrained.


Looking at the manufacturers ranking, last year winner BMW (16%) is in the lead, thanks to the good performances of its extensive lineup, with the runner-up Volkswagen (14%, up 1%), recovering a bit of ground to the leader, while Nissan (10%) is the new Bronze medalist, having removed Renault (9’%, down 1%) from the podium. 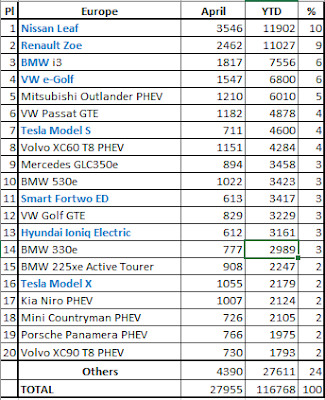