Looking at April Best Sellers, the Zoe (+2% YoY) collected another win, with the runner-up Nissan Leaf scoring 375 deliveries, up 98% regarding the same period last year.

A new face shows up on the Monthly Top 5, with the hot selling Porsche Panamera PHEV collecting its first #5, thanks to 90 deliveries, a new year best.

In a market known for its stability, the Mercedes GLC350e climbed one position to #4, with the 2018 Top 4 now replicating last month ranking.

Other models on the rise were the Smart Fortwo ED and VW Passat GTE, both climbing one position to #7 and #8, respectively, while the Porsche Panamera PHEV leaped six positions into #10, and with the #8 position not that far away, we could even see Porsche's Sports Sedan climb a few more positions in the near future.

The forever-young Peugeot iOn scored 59 registrations last month (+16% YoY), allowing it to climb two positions, to #11, while the BMW X5 PHEV (69 units) had its best result in almost two years, allowing it to rise one position, to #18, and the Citroen C-Zero joined the Top 20, making now 10 BEVs in the Top 20.
Below the Top 20, there is a significant landing this month, with the Jaguar i-Pace registring its first 20 units, which is has beaten the Tesla Model X score last month (16 deliveries).

In the brands ranking, Renault (36%, down 1%) continues in the driver seat, followed at a distance by BMW and Nissan (Both with 11%), while Volvo, with 6% share (Up 1%), is still far from the podium positions. 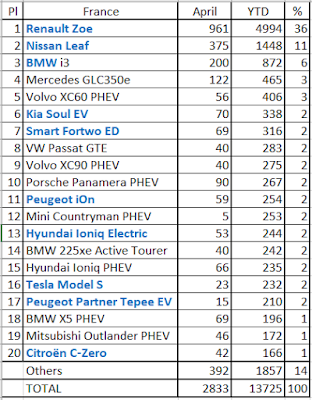