King Leaf
After March's perfect storm of records, the PEV market in Norway took some time to breathe, but still, with 6,105 units (+82% YoY) and 43% share last month, one cannot say that this market is really slowing down...

Due to a less impressive performance last month, where Plug-ins just got 43% share, the fuels mix in April showed gas cars recovering the leadership (26% of all sales, vs 28% in April '17), while BEVs were a close Second, with 25% share (sales grew 112% YoY), with PHEVs responsible for 18% of the total market (+52%), while on the other hand, diesel-powered cars scored a low 19% share (It was 29% twelve months ago), with the remainder (12%) going to regular HEVs.

At this pace, Diesel will be dead in Norway by 2020...And the same for regular gasoline vehicles before 2025.

Looking at April Top Sellers, the new Nissan Leaf continues to rule unchallenged, registering almost twice as much units as the runner-up e-Golf, and expect the Japanese hatchback to continue leading sales in Norway in the next few months.

The remaining places went for the aforementioned VW e-Golf (539 deliveries, a year best), the BMW i3 closed the podium, while the Volvo XC60 PHEV (422 deliveries, year best) was Fourth, while the Tesla Model X delivered a surprising Fifth Place, thanks to 416 deliveries, a new record number for any Tesla model in the usually slow first-month-of-quarter, which gives credit to the theory that the automaker is focusing in overseas markets, on this second quarter of the year.

Looking at the YTD ranking, the most important news were the Tesla Model X climbing to #4, while the Volvo XC60 PHEV jumped two spots, into Seventh, switching places with the Mitsubishi Outlander PHEV.

Another model on the rise was the VW Passat GTE, that thanks to 196 units delivered last month (Best result this year), climbed to #12.

A mention for the Mercedes GLC350e, registering a record 326 units, with the Kia representatives also shining, the Niro PHEV scored a record 141 units, while its older sibling, the Soul EV, delivered 137 units, its best result in over two years, while outside the Top 20, their cousin Hyundai Ioniq PHEV registered a record 72 deliveries. 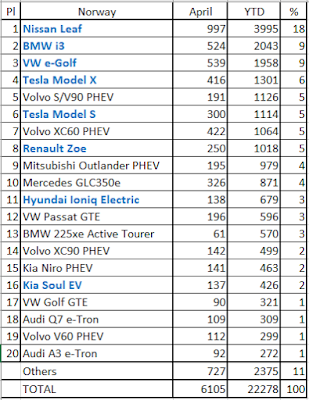 Models breakdown by Fuel Source
With the PEV share nearing 50%, the PEV market is starting to look a lot like the mainstream market, breaking down sales by fuel source, we have 5 BEVs, 2 PHEVs and 3 HEVs, with no ICE model present, even in a slow month for Plug-ins, which could mean that ICE models are gone for good from this Top 10.

BEVs took all podium places, with the best selling Plug-in hybrid (Volvo XC60 PHEV) being only Fourth, meaning that buyers are starting to favor BEVs, while the best selling model without a Plug (Toyota Yaris) was only #6.

With regular ICE models wiped out (For good?) from the Top 10,  and the best selling HEV only #6, maybe it won't be long for a full Plug-in Top 10. Next June? 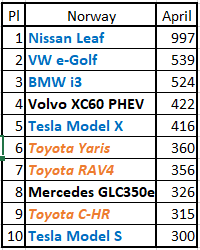