BAIC EC-Series was totally eclipsed & Nissan Leaf recovered #1, with Tesla nameplates on the up
Registrations grew 58% in June, to almost 160,000 units, the third best month ever, so despite the last threats, the current record (174,000 units, in December '17) in holding on, but will it resist much longer? Do i hear a new record by September?...

The positive first half of the year is placing the 2018 numbers at some 760,000 units (+69% YoY), with the global PEV share now standing at a record 1.6% share, which makes realistic the prospect that this year we will hit two million units (and over 2% share).

In June, the Tesla Model 3 was for the first time the Best Selling plug-in in the world, with close to 8,000 units (new pb), and with the deliveries dam being open in July, expect it to continue the Best Seller in the following months, at least until the currently eclipsed BAIC EC-Series, that just lost access to government subsidies, shows its new, subsidy able, version (the EC3).

Bring the popcorn in Q4, as  we should see an entertaining race between these two in the race for the October/November/December titles...

Regarding the 2018 title, we can already envision what will happens, expect the Model 3 to jump ahead of the Leaf by September, with the EC-Series stealing the Silver medal from the Nissan Leaf by November/December.

But Tesla wasn't all only about the Model 3, with the US deliveries on hold, the EV maker successfully focused on deliver their Model S & X units in overseas markets, with both nameplates climbing in the ranking, to #6 (Model S), and #7 (Model X).

As for the remaining YTD ranking, the #9 Renault Zoe climbed one position, to Ninth, while looking below the usual Top 10, we see the #11 Mitsubishi Outlander PHEV close to the top two positions, while the BMW i3, a familiar face in previous years on the Top 10, is now down to #13, despite growing sales (+8% YoY).

Looking at potential Top 10 candidates, there are three models, all coming from China: The BYD e5, the Roewe i6 PHEV and the BAIC EX-Series, if the first is a regular in Top 20 appearances, the other two are breaking records every passing month, and should be racing for a Top 10 presence by September.

Looking at the BEV / PHEV breakdown, pure electrics stayed at 63% of the total market, but expect this score to be improved during the year, possibly to levels above the 65% share of 2017. 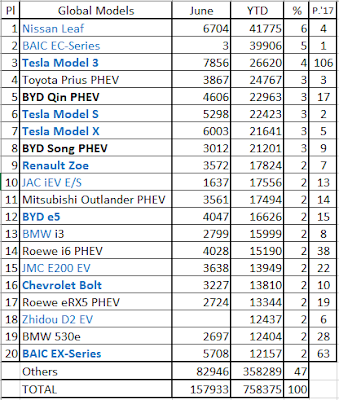 If Tesla is the favorite to win the 2018 manufacturers title, in this case the race should be closer than in the models category, it will all depend if BYD can increase output and deliver the new Tang, Qin and Yuan models in large numbers. As with Tesla, demand is there, all we need to know is if they can make enough of them...

Elsewhere, Nissan recovered the Fifth Spot from Volkswagen, but both are now seeing the #7 Roewe getting bigger and bigger on the rear view mirror, as the Shanghai OEM posted a third consecutive(!) record result, with 12,277 units, allowing it to be Third in June, and being just 900 units behind #5.

Will we see it surpass both the German and the Japanese brands in July? If that were to happen, we would have three Chinese OEMs on the Top 5, and only one legacy OEM (BMW) in it.

Speaking of Chinese automakers, Chery returned to the Top 10 after a long absence, jumping three positions into Eighth, thanks to a record performance of 6,739 deliveries.

Because we are at half time of the 2018 game, let's look below the Top 10 and see the major changes happening below it, Volvo (+150% YoY), Kia (+218%), Hyundai (+58%) and the little known Chinese brand Hawtai are the big gainers this year, with the Chinese brand having already outperformed its 2017 result in just 6 months... 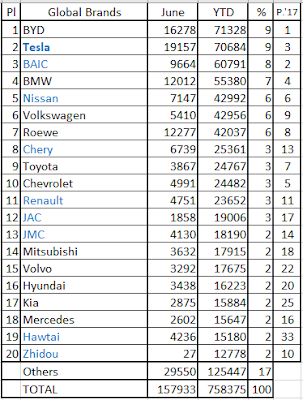 If we gather sales by Automotive Groups, the Renault-Nissan-Mitsubishi Alliance is ahead, with 11% share (Up 1% regarding 2017), followed by BYD and Tesla, both with 9% share, while BAIC, the BMW Group and the Volkswagen Group all race for #4, with 8% share, with the interesting fact that VAG has won 2% share regarding 2017.

A / City Car - In a segment completely owned by Chinese OEMs, the BAIC EC-Series is the undisputed King;
B / Subcompact - The Renault Zoe continues to outsell the BMW i3;
C / Compact - A big reshuffle regarding last year, with the Nissan Leaf regaining the lead, with the Toyota Prius PHEV and BYD Qin PHEV following it at a distance;
D / Midsize - What has been expected since a long time ago, happenned: The Tesla Model 3 is the new, undisputed, class leader;
E+F / Fullsize - Tesla Model S, hands down leader since 2012. Second Place is in the hands of the successful (#20) BMW 530e, followed by the Porsche Panamera PHEV, that is continuing its success story;
Sports car / Coupé / Convertible - BMW i8 (1,516 units), is in the lead once again, without real competition, for reference, the Second Placed was the recently arrived BAIC Arcfox Lite (Well, if one can consider it a Coupé...), with 574 units;
SUV / Crossover - The hottest class on the Automotive World is seeing its class poster-child, the Tesla Model X, in front, with two compact Crossovers following it: The VW Tiguan-like BYD Song PHEV (#2) and the Renault Captur-like JAC iEV7S/E (#3);
MPV / Minivan - A class that has been somewhat overshadowed by the Crossover craze, the BMW 225xe Active Tourer is still the segment Best Seller (4,735 units), followed by the Chrysler Pacifica PHEV (3,982 units);
LCV / Van - Interesting changes here, with the Renault Kangoo ZE profiting from the new 33kWh battery to jump ahead, with 3,494 units, followed by the StreetScooter (1,950 units) and Peugeot Partner EV (1,350);
Pick up Truck - The Chinese Dongfeng Rich EV (108 units) repeated last year title being the only model to reach significant numbers. This is a golden opportunity that no one so far (Chinese included) has tried to take. For how long?