Tesla's usual last-month-of-quarter peak last month had the help of the 200k registrations management in the US, with the EV carmaker focusing Model S & X deliveries in overseas markets, and the Dutch market was one that profited the most, with both the Model S (675 units) and the Model X (475) shattering their previous records, a feat even more astounding in the case of the Model S, considering that the nameplate already has 5 years of history in the Netherlands...In all, Tesla delivered a record 1,125 units last month, outselling Audi(!) in that same period.

The new generation is doing wonders for the Nissan Leaf, performing its fourth consecutive 200-something registrations month, with the BMW i3 ending the month in Fourth, with 156 units, its best result in 30 months, while the VW e-Golf was Fifth, with 144 deliveries.

Looking at the 2018 ranking, the Nissan Leaf did what it had been threatening lately, surpassing the VW e-Golf and reaching the runner-up status. If the German automaker wants to keep the podium position and race the Japanese hatchback for the Best Selling affordable BEV title, it will need to step up production.

Profiting from the unusual high tide in June, the Tesla Model X climbed to #4, and has now its headlights set on the VW e-Golf rear, so we could see a Tesla 1-3 by next September.

The Renault Zoe recovered one place, climbing to #7, thanks to 130 units (Year Best), while the Mini Countryman PHEV jumped two spots, to #13, thanks to 24 registrations, its best performance in a year.

But the leadership on the PHEV League continues to belong to the Porsche Panamera PHEV, with 220 units (36 in June) and #9 in the PEV ranking, although the Best Seller of the Month was the surprising Hyundai Ioniq PHEV, that finally made its oficial debut in this market, with 55 units, leaping to #14. Was this a one time thing, or will the efficient Korean hatchback replicate these numbers in the coming months, making some waves on the PHEV league?

Elsewhere, we welcome in #18 the BMW i8, back at the Best Sellers list, thanks to 15 units registered in June, if we go back a few years, the BMW Sports Car was the second plug-in model (The first was the Tesla Model S) to go head to head with their ICE competition, so we wish all the best for the second coming of the i8, last month it was the Second Best Seller of the Sports Car class, only behind the eternal Porsche 911 (58 units). 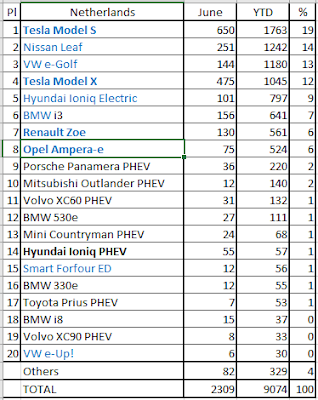 Editor's note: In order to separate short range BEVs and PHEVs from longer range models, from now on, only the Longer Range models (>=50 kms for PHEVs; >=300 kms for BEVs - WLTP cycle) will be in Bold, as such, in this Top 20, only Teslas, the Renault Zoe, Opel Ampera-e and Hyundai Ioniq PHEV are in Bold, separating them from their lower range competitors.

If we add regular hybrids to plug-ins, the Tesla flood was so big in June that the Model S managed to outsell all hybrid models on the market, while the Model X also joined the ranking in Fourth.

In this Tesla vs HEVs edition, the resisting hybrids were the Toyota Yaris Hybrid in Second, being the only Toyota in the podium, followed by the #3 Kia Niro HEV and the #5 Toyota C-HR Hybrid.


With the Model S profiting from the quarter-end deliveries peak, it doubled deliveries of the #2 BMW 5-Series in June, so it's best to see the full year sales, so far in 2018, the Tesla Model S is second only to the BMW 5-Series, with the remaining competition being far behind.

Big SUV's had a big hit with the end of PHEV incentives, and only the Volvo XC90 manages to have significant sales, looking at full year registrations, there's really no competition for the American Sports-Minivan-SUV.
Published by José Pontes at July 06, 2018