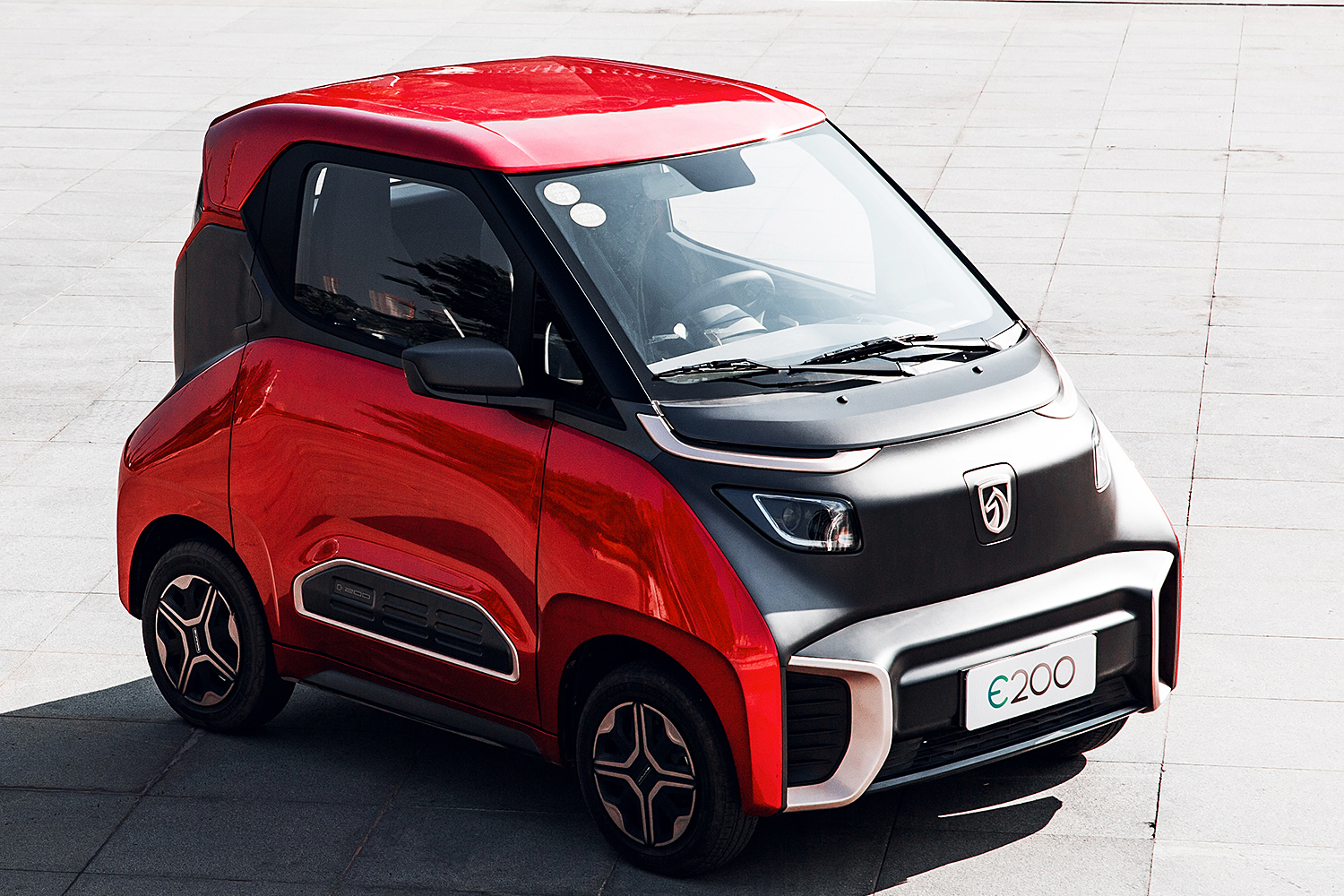 
The end-of-incentives hangover deepened in August, with the Chinese plugin market dropping a steep 12% YoY, with PHEVs crashing 51%(!) YoY last month, while amazingly, BEVs managed managed to grow, by 4%, a small increase over the 1% growth rate of July, which means BEVs are currently the only ray of light in the Chinese market (the overall market also dropped, by 8% YoY).


The reason for this drop lies on the subsidy changes that happened on June, 26, when NEV subsidies were cut off completely for vehicles with less than 250 kms electric range, while those with higher range saw their subsidies halved.


From now on, we should see a less subsidy dependent market, with PHEVs losing relevance (they represented 17% of sales in August, versus 22% YTD), with several models unable to compensate the subsidy loss, while others will continue thriving, as we are now starting to witness.


This is just another factor adding up to the reasons on why China is without doubt the most fast evolving plugin market on Earth, with several changes happening at the same time, be it foreign OEMs trying to get a piece of the NEV cake / avoid fines imposed the new quota system, local makers scaling up production with a never ending slew of ever more competitive models, or the run for survival of the several startups on the market.


In August, the most important surprise in the models ranking was the SAIC-GM offspring Baojun E-Series winning #1, thanks to an amazing 8,698 units record result, but BAIC couldn’t really complain, placing two of its models in the remaining places of the podium.

#1 – Baojun E-Series: With the end of subsidies for most of the small city EVs, unable to reach the minimum 250 kms range, the few that still have access to subventions have seen their sales rise, and none did it more spectacularly than the Baojun E-Series, Shanghai Auto and General Motors offspring. With an irregular career up to now, the last months of the tiny two-seater have been memorable, having registered a record 8,698 units in August, allowing it to be last month Best Seller in China, a first for any SAIC nameplate. The updated range, thanks to a new 24 kWh battery, is a crucial tool to reach the subsidy minimum range requirement, which added to its competitive price (CNY 93,900 / USD 14,700) before subsidies, makes it an appealing model, especially considering its modern design and features.

#2 – BAIC EU-Series: The electric sedan scored 7,580 units last month, with the Beijing Auto losing to the Baojun E-Series the monthly Best Seller title, ending a three month  winning streak. The design and specs (215 hp, 416 kms / 260 mi NEDC, US $32,500) allows it to remain a popular choice, but with the competition increasing every passing month, BAIC has a tough job ahead of it, if it wants to keep leading the pack.


#3 – BAIC EX-Series: BAIC's current good moment, it has three models in the Top 20, is explained by having competitive models in the three largest segments (sedans, crossovers and city cars). The EX-Series is the bread and butter small crossover of Beijing Auto stable (Think Renault Captur/Kia Soul), and last month it scored 6,568 units,  a new year best. Hardly a vehicle that makes your pulse accelerate (107 hp motor, 318 kms NEDC range), for that you can check the #4 BYD Yuan, the EX-Series uses is killer price (starting at 21,000 USD) to attract buyers

#4 – BYD Yuan / S2 EV: To counterbalance the subsidy cut, BYD launched a basic version of the Yuan EV, called the S2, with a less powerful electric motor (only 70 kW / 93 hp) and a smaller battery (41 kWh), allowing it to keep the 6,000-something monthly results. With the brand prioritizing BEVs, battery demand is increasing faster than before, so higher priced models (Tang, Song, Qin, etc) have the priority over the Yuan, making it hard for the crossover to surpass the meh result of 5,468 units of August. The Yuan EV has unrivalled specs (58 kWh battery, 410 kms/255 mi NEDC range, 163 hp motor), given its price (25,000 USD).

#5 – GAC Aion S: A few months ago I was mentioning the big potential of this model, saying it could reach a 10,000 units/month pace this year. And things are going well for the Aion S, because on its fourth month in the market, the sleek sedan is now at 3,815 units, reaching the 5th place in August, its seond Top 5 spot in a row. Another sedan inspired by the Tesla Model 3 formula, GAC has high hopes for its new dedicated EV lineup, the Aion. Right now we have the sedan Aion S, but a midsize SUV, the LX, will soon follow. Back at the Aion S, beyond the stylish (and aerodynamic - 0.245cd) looks, this new model bears some impressive specs: a 59 kWh CATL NCM 811 battery, 510 km / 318 mi NEDC range and Level 2 driving aids, but the real killer is the price: Around 180,000 CNY / $26,000. Before subsidies. Like Kanye West would say: “Now, I ain’t sayin’ it’s a Tesla-killer / But the Aion is messin’ with the Best Sellers…” 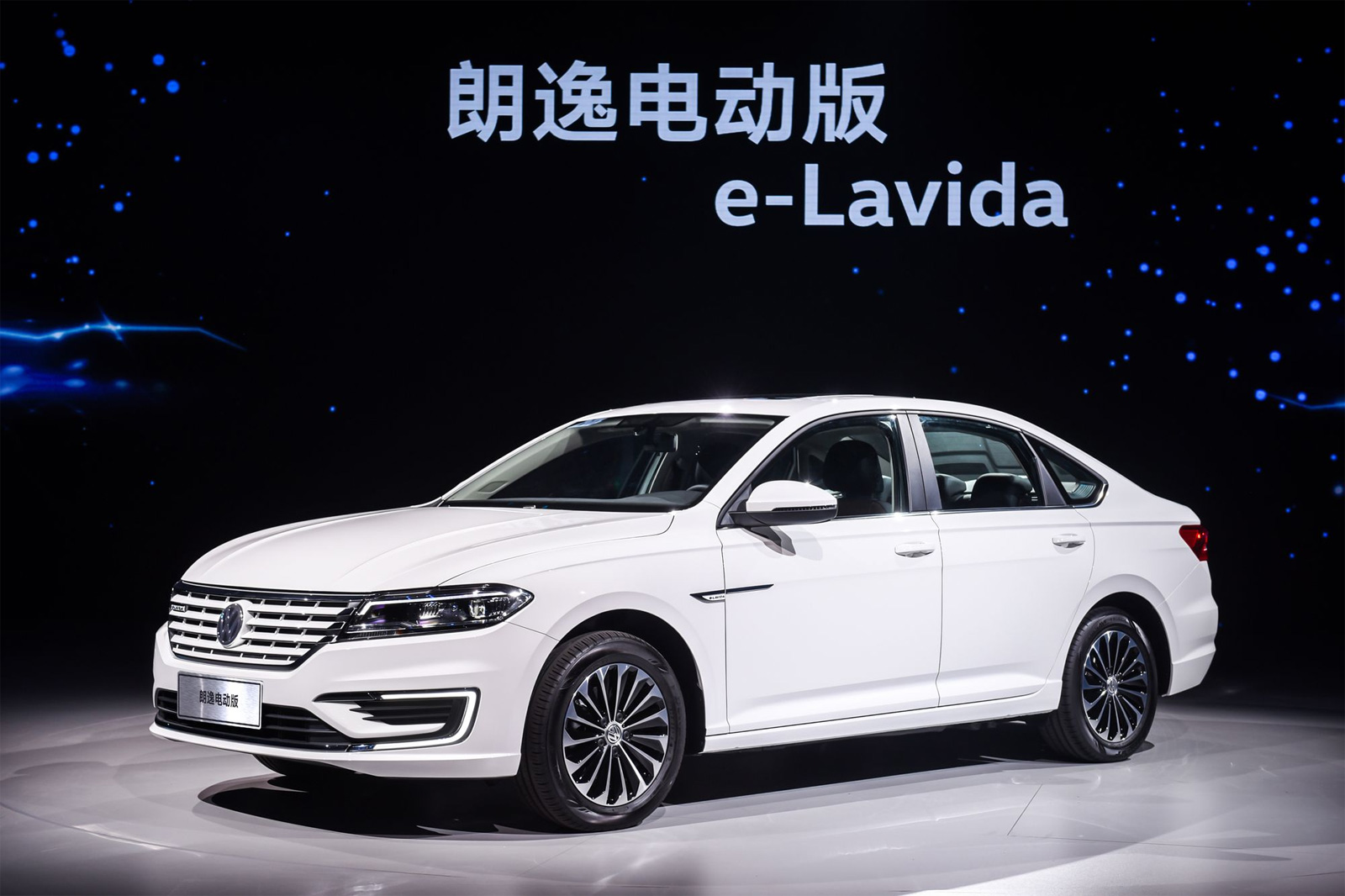 The market is now adapting to the new reality, now that certain models last access to subsidies.


We’ll start with the most important position change, with the SAIC Baojun E-Series jumping 4 positions to the 3rd spot. This was one of the most surprising jumps, but considering that it is one of the few city EVs that still have access to subsidies, one can see where this sales surge (8,698 units, new record) comes from.


The other Top 10 position change was the Changan Eado EV reaching the #10 spot, switching places with the JAC iEV E-Series, that has seen its deliveries dry up.


But the climber of the month shows up on the second half of the table, with the BAIC EX-Series shooting 6 spots, to #14, while its small sibling, the EC-Series, hangs on in #18.


Indifferent to the subsidies cut, the BMW 530Le climbed two positions, to #12, thanks to a record 3,001 deliveries in August, making it not only the Best-Selling Luxury plugin vehicle on the market, but also the Best-Selling foreigner on the table.


With the Passat PHEV losing access to subsidies, and Volkswagen now betting on the right horses (VW e-Lavida), expect the sales of the midsize VW to dry up soon, making the Best Selling Foreign nameplate really a race between the #12 BMW 530Le and the #15 Tesla Model 3.


If the distance isn’t negligible (1,790 units) between both nameplates, September should help the Tesla midsizer to close the gap significantly, with the Q4 Shanghai production allowing the Californian to surpass the Bimmer and win the 2019 Best Selling Foreigner title in China, and maybe with a Top 10 position to boot.


Talking about production ramp ups, the much hyped GAC Aion S sedan just keeps on growing, having reached 3,815 units last month. Although the GAC sedan is still 1,500 units below the Top 20, if the model continues to grow deliveries, it shouldn’t take long for it to show up in the ranking. Maybe already in September?


How high will the GAC sedan go this year? Top 10? It all depends on the speed of the production ramp up, but one thing is certain: The Aion S looks to be a strong contender for a Top 5 spot in 2020.


A mention also for the 1,124 units of the e-Lavida sedan, the new star of the VW stable, now playing in the crowded (and profitable) field of compact sedans.


Outside the podium, Geely (6%) increased the distance to other, smaller players (Chery, JAC…).


Will this Natural Selection help the market become more competitive? Who knows, but for now, foreign carmakers have 12% share (of which, Tesla, BMW, and VW all have 3% each), which is still not a lot, but it is already double of what they had last year… 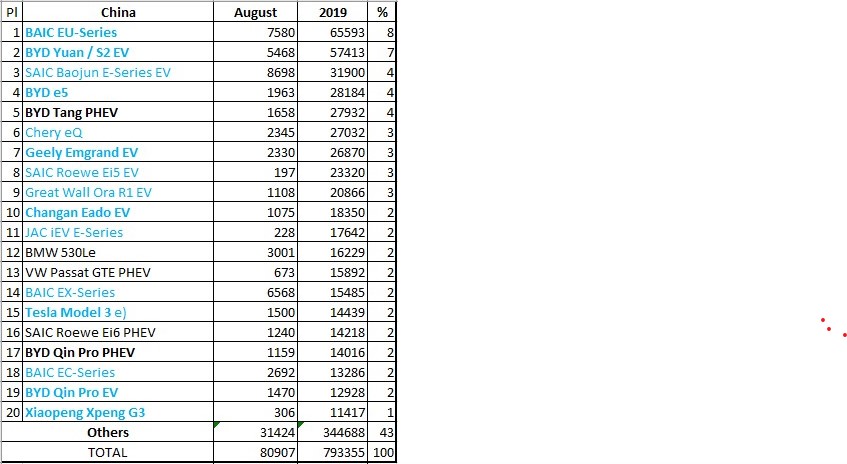