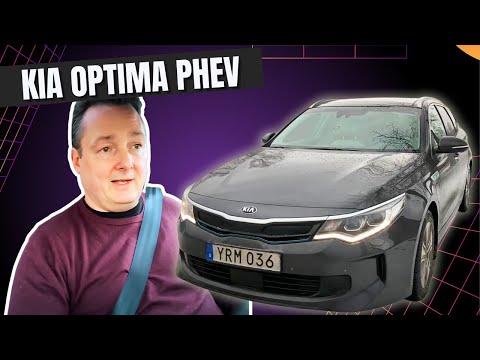 * - By mistake i had titled the post "Sweden July 2019", when obviously it was supposed to be August. Sorry for the mistake, it's now corrected.

Diesels are down to 30% share last month, so by the looks of it, in 2025 the once dominant fuel will be residual in new registrations.


Looking at last month Best Sellers, while the Tesla Model 3 had its worst deliveries month since it landed (see Model S deliveries below), dropping below the podium in July, Kia had a great month, placing two models in the top two spots, with the Optima PHEV in #1, with 371 registrations, most of them station wagons, while the Niro PHEV was 2nd, with 313 units.

But the two most surprising performances showed up in 7th and 8th, with the #8 Tesla Model S scoring 117 deliveries, its best off-peak result ever, so it seems the specs update have made it popular again in Sweden, almost beating its smaller brother, Model 3. A freak event?

Finally, the Nissan Leaf ended the month in #7, with 119 registrations, its best result since March, so it seems the 62 kWh version is providing the much needed sales fix for the Japanese hatchback.

On the 2019 ranking, there is not much to talk about on the top positions, the Volvo XC60 PHEV was up one position, to #7, changing places with the Kia Niro EV, that with only 32 registrations, seems to have ended the 2019 allocation units. Better luck in 2020?

On the second half of the ranking, we have both the Volvo XC90 PHEV and the VW e-Golf(63 units, new Year Best!) rising one position, to #17 and #18, respectively, with both models surpassing the Kia Soul EV, that despite the new generation, seems to have inherited its antecessor battery constraints.

Speaking of Koreran BEVs, the Hyundai Ioniq Electric joined the ranking, in #20, thanks to 55 deliveries, its best performance since January. Will the revised version bring a higher battery availability? In any case, this new addion to the BEV field allowed all-electrics to have 11 representatives in the Top 20, this being the first time since 2014 that BEVs are the majority. 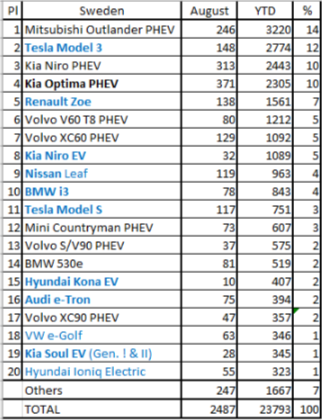 In the Premium midsize car class, the Tesla Model 3 dropped to 4th, surpassed by the BMW 3-Series and Mercedes C-Class, but with the Californian expected to have a deliveries peak in September (fingers crossed), it could switch places with those two and end Q3 in #3.

Interesting is the YoY behavior of the Model 3 competitors, while those that favour comfort (Volvo and Mercedes) are growing (+18% for the Swedish twins, +42% for the German model), the ones that base their strengths in driving fun (BMW) or technology (Audi) are dropping (-10% for the 3-Series, and staggering -39% for the A4).

So once again it is proven that Tesla is primarily stealing customers from BMW and Audi.
Published by José Pontes at September 03, 2019