The main factor for this change in 2019 was the Tesla Model 3, that took the market by storm, ending the year with a record 2.663 units and 15% share, a strong number in a market known for its fragmentation (in 2018 the BMW 530e won the models title with just 7% share), with the Californian ending the year on strong note, by delivering 457 units, its best score since March.

This is the second Tesla nameplate to win the Best Seller trophy, as the Model S had already won it in 2014  & '15.

In the runner-up spot we have the Volvo XC60 PHEV, improving on its 2018 result (Bronze Medal, with 903 units), while on the 3rd spot, we have another newcomer, with the local hero Audi e-Tron reaching the Bronze Medal in December, after a record 129 deliveries last month. It seems both Tesla and Audi had enough spare units to cater at the same time the Dutch year-end rush and the neighboring Belgium.
.
Speaking of last minute changes, the new BMW X5 PHEV managed to reach a Top 10 spot, thanks to a record 341 units, allowing the German SUV to shot eight positions, to #9, while being at the same time #2 in December. It seems BMW's long range plugin hybrid has presented its application for the 2020 Best Seller trophy...

Other models shining in December were the Renault Zoe, that registered 49 units, its best result since June, so it seems the French hatchback has recovered from the recent skin change and is ready to continue leading the Small EV category, while the Tesla Model X had its best result (95 units) in 33 months, with the SUV ending the year with a 33% YoY increase in deliveries.

In the main sub-categories, the Best Selling plugin hybrid and Best Selling SUV prizes were to the Volvo XC60 PHEV, the BMW 530e won the full size category as a consolation prize from losing this year Best Seller trophy and the Renault Kangoo ZE won another LCV title, doubling sales of the #2 Nissan e-NV200 (208 vs 90). 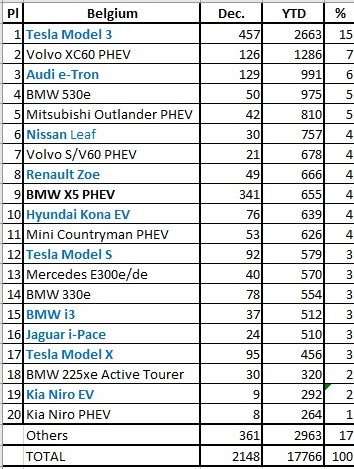 Looking into 2020, the BEV take over should be continue and the Tesla Model 3 is starting the year as the favorite, but this year Models race shouldn't be a walk in the park for the Tesla, like 2019 was, so who can follow the Californian into the 3.000 units mark?

If the Audi e-Tron doesn't seem to fit for it (2,000 units would already be great), the new BMW X5 PHEV looks to have been made for this market, not only it suits the local tastes (insert Belgian Alps comment), but the long range of its PHEV powertrain allows it to maximize on local incentives for company cars, which should make it a leasing company darling.

Speaking of the all-important leasing companies, there are two models arriving soon that could make an impact, both the Renault Captur PHEV and the Mercedes A250e should also be popular in the leasing segment.

Regarding manufacturers, Tesla will have to defend its title from a rising BMW, while Mercedes and Renault will have a shot at a podium position.