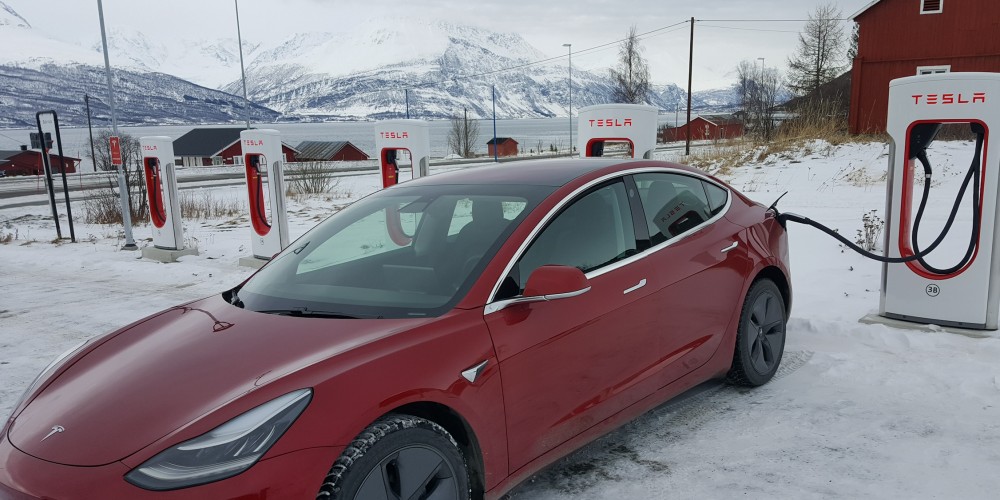 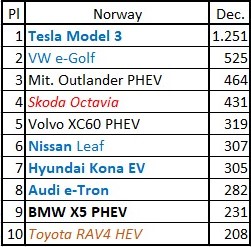 Looking at December best sellers, we have two unplugged models, with the Skoda Octávia, registering an amazing 431 registrations (fleet deal? taxis?), while the Toyota RAV4 Hybrid rounds up the table, in #10.

Anyway, looking at December Best Sellers, we see the Tesla Model 3 winning the monthly title, with 1.251 deliveries, with the VW e-Golf  (525 units) winning Silver, with the Mitsubishi Outlander PHEV completing the podium.

Elsewhere, besides the aforementioned two BEVs in the podium, there are 3 other BEVs in the Top 10, making it 5 out of 10, while this time we have 3 PHEVs, as several BEVs deliveries in Norway were starved by the Dutch sales peak, allowing PHEVs  (and others) to have more space to show up in the Top 10.

Expect the blue wave to become even more predominant throughout 2020. 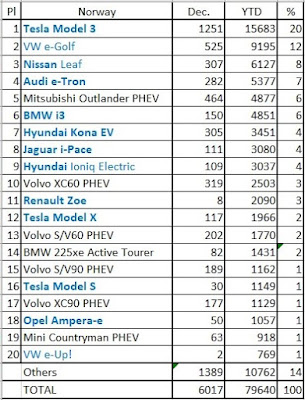 Looking at the 2019 models ranking, the Tesla Model 3 has won the trophy in its landing year, with a record 15.683 units (Funny enough, 12 months ago i was predicting this volume of deliveries for the Tesla nameplate…).
Last year winner, the Nissan Leaf, ended in Third Place, while in 2nd we have the 2017 winner, the VW e-Golf, that amazingly has seen its deliveries grow by 27% in its last full sales year. Not bad for a career end...

Elsewhere, the big surprise was the Audi e-Tron ending its first year on the market in #4, winning the Best Selling SUV and Luxury categories, while promising to be one of the competitors for the podium in 2020, while the Best Selling PHEV title went once again for the Mitsubishi Outlander PHEV (the '19 win is its 4th in a row), with no real competition, as the Japanese SUV seems to be the only plugin hybrid being able to run with the best of BEVs.

Looking at other sub-category prizes, the small EV Best Seller went once again for the BMW i3, while on the Best Selling Luxury Car category, there was a last minute surprise, with the Volvo S/V90 PHEV twins surpassing the Tesla Model S, thanks to a 189 units performance in December, their best result in 18 months, allowing them to end in front of the Californian by just 13 units.

Actually, last month was quite positive for Volvo, not only the flagship twins won their category, but the Volvo XC90 PHEV also climbed to #17, thanks to 177 units, its best result since June 2018, and the Volvo XC60 PHEV scored 319 units, a new record for the Swedish midsize SUV.


Finally, looking into 2020, the defending champion Tesla Model 3 won't have it so easy this time, as several volume models are set to land throughout the year, but none will have enough volume to threat the Californian lead, with the exception of the VW ID.3, that will be a force to be reckoned once it lands, but because it will land late in the year, it won't be enough to win this year title. Maybe in 2021?

Tesla will probably also take the Manufacturers title, but it will see Volkswagen getting closer every passing month on the second half of the year.