Looking at last month best sellers, the big news were both Smart nameplates pulling Year Best results, with the Forfour EV reaching 173 units and becoming the December Best Seller, allowing it to climb one position in December and end the year in #9, while its two-seater sibling ended the year in #11.

The final results of the 2019 ranking crowned the Tesla Model 3 as the Best Seller, although it had to keep a close eye on the runner-up Nissan Leaf, with the Japanese hatchback repeating last year standing.

The Mitsubishi Outlander PHEV was preparing itself to repeat the Bronze Medal and the Best Selling PHEV title of last year, but the Mini Countryman PHEV pulled out a strong end of the year (455 units in Q4), removing the Japanese SUV from the 3rd spot in the last days of December, and allowing the British Crossover to win its first podium position and Best Selling PHEV title.

Other models with great performances in the last month of the year were the VW e-Golf, that thanks to 136 registrations last month, managed to climb one position to #7, ending the year with 941 units, tripling(!) its 2018 result, while both Porsche models also shined, with the #20 Panamera PHEV registering 33 units, a new year best, while the Cayenne did even better, by delivering 108 units, allowing it to jump four positions, to #15.

On the manufacturers ranking, the race was pretty close, with BMW (11%) finally winning the trophy, with a 102 units advantage over Tesla (11%), while Nissan (10%) won the Bronze medal. 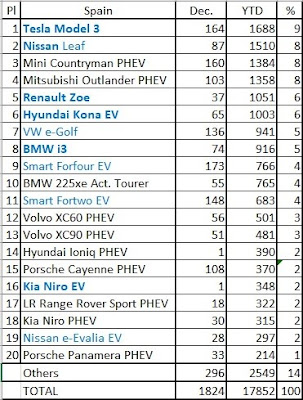 Looking at this year race, sales will continue to grow fast, with the plugin share reaching 2% by year end, with a number of candidates willing to remove the Model 3 from the throne, the Renault Zoe will try to recover its mojo in 2020, the Hyundai Kona EV will build on its current result, while the Peugeot EVs (208 and 2008) will surely be among the Top 10, and the VW ID.3 will also be a model to follow closely.