The light at the end of the tunnel?


After some terrible months (-42% on November), the Chinese plugin market seems to have bottomed out, falling just 22% YoY in December, to 149,000 units, with both powertrain technologies dropping, but with BEVs faring better (only -17% YoY) than PHEVs (-45%), as the market adjusts to a new, less subsidy-dependent, reality.


A significant consequence of the subsidy changes last summer is the fall from grace of PHEVs, because despite the drops in the second half of the year, BEVs still managed to end the year with a 13% growth rate, while plugin hybrids went down by 13%...


And the trend is becoming more visible every passing month, as in December BEVs represented 86% of registrations, against the 80% average of 2019, which tells a strong message to the players in the market: “Go BEV, or Go Home”.


Interestingly, the overall automotive market also seems to be seeing the light at the end of the tunnel, after 2019 (-10% YoY!) witnessing the second year on a row of sales drops, something unprecedented in the last 30 years, in December the market only dropped 1% YoY, so we could see a return to growth in 2020, which could mean even better growth perspectives for the local plugin market.


While many models saw their sales dry up, and even full brands have gone the way of the dodo, like Hawtai, new models are taking over the void, while the most expensive end of the market continues to thrive, helping foreign OEMs to increase market share, and in this particular case, Tesla was the winner, with the California-based brand taking 4% of the Chinese plugin market.


But to be fair, while as an individual brand, Tesla was the winner, with almost 43,000 units, looking at Automotive Groups as a whole, the Volkswagen Group took the trophy, with some 47,000 units.


Was this particular race (Best Selling Foreigner) in China the opening salvo for a Apple/Microsoft-like global rivalry in the foreseable years? Discuss.


In December, Beijing Auto (BAIC) had a smashing month, with the EU-Series sedan scoring 21,963 units, a new monthly record for a single model in China, while the smaller EC-Series also registered a five-digit result, its first in 2019.


But the surprise of the month was the new FAW Bestune B30 EV sedan coming out of nowhere to 8,735 units in December. Fleet deal?

#1 – BAIC EU-Series: The electric sedan took the usual December peak to score a record performance, with the 21,963 units of last month being a new monthly high for a single model in China. In fact, if we disregard the Tesla Model 3 performances in the USA, it was the best performance ever, by any EV, anywhere. What it is the secret to its success? An attractive design and specs (215 hp, 416 kms / 260 mi NEDC, US $32,500) help, but there must be more to it, than just specs...

#2 – BAIC EC-Series: Next to the record performance of its EU-Series sibling, the 11,409 units of BAIC’s small EV might seem puny, but it was enough for a #2 position, being also the first (and only) time in 2019 that the city EV managed to score a five-digit number. Will the EC-Series recover its mojo this year?

#3 – FAW Bestune B30 EV: FAW’s bread and butter electric sedan was something of a underdog, with its sales paling next to the category best sellers, as an example, it had sold 3,434 units in the whole year of 2018. Then, out of the blue, the electric sedan registered a record 8,735 units in December! No doubt due to fleet deal(s), because despite an ok design, its specs (33 kWh battery, 80 kW motor) are really weak next for the category. Expect this model to continue throughout 2020 because of fleet deals (Taxis, etc), but one thing is certain: FAW, one of the leading automotive makers in China, really needs a shot in the arm, when it comes to EVs.

#4 – GAC Aion S: The rise and rise of the Aion S continues, as the sleek sedan is improving its performance every passing month, having scored yet another record, with 8,460 units, reaching the 4th place last month, its 6th Top 5 spot in a row. And if we add the 1,178 units of the badge-engineered Toyota iA5 EV, that is nothing else than a Aion S with a Toyota badge, the GAC sedan would have registered 9,638 units, which would place it in 3rd. But back to the Aion S, beyond the stylish (and aerodynamic - 0.245cd) looks, this new model bears some impressive specs: a 59 kWh CATL NCM 811 battery, 510 km / 318 mi NEDC range and Level 2 driving aids, but the real killer is the price: Around 180,000 CNY / $26,000. Before subsidies.

#5 – Baojun E-Series: With the end of subsidies for most of the small city EVs, unable to reach the minimum 250 kms range, the Baojun E-Series won the lottery, with the Shanghai Auto and General Motors offspring watching its sales jump in the past few months, winning consecutive podium positions, even if last month was only 5th, having registered 8,352 units last month. The access to the current subsidy, added to its competitive price (CNY 93,900 / USD 14,700) before subsidies, makes it an appealing model for car-sharing companies, as well as other kinds of fleets.


We’ll start by celebrating the first Best Seller trophy of the BAIC EU-Series, with a new yearly record (111,047 units) as the cherry on top, with the risky bet of Beijing Auto, by switching its focus from the small EC-Series, two times Best Seller (2017 and ’18), to the larger EU-Series sedan, has payed off, it’s like BAIC was already guessing what was ahead of them…


The runner-up spot went to the BYD Yuan EV, that at a given time seemed to be a strong contender for the leadership, but then it was hit full frontal by the subsidy changes, while the opposite happened to the 3rd placed Baojun E-Series, since the new rules, sales went up through the roof, allowing it to jump from obscurity into the podium…Which in turn, was the first podium for a SAIC model since 2012, when the small Roewe E50 was #3, with 238 units…Yeah, that many.


There were plenty of last-minute position changes, with the Roewe Ei5 recovering some positions and ending the year in 7th, a great improvement over the #15 spot of 2018. It seems Chinese buyers do like station wagons, after all…


But the Climbers of the Month were once again the GAC Aion S, jumping 6 positions, to #6, while the Tesla Model 3 joined the Top 10, ending 2019 in #8, with the Californian being the first foreign nameplate to end a year in the Top 10.


What’s impressive on these two models performance, is that if both ended the year with record performances, both have even bigger growth perspectives for 2020, with the Aion S growing fast (it has always grown month-on-month since it landed), while its badge-engineered Toyota twin, the iA5, is already in four-digits (1,178 units) in only its second month on the market, so adding both together, as basically they are the same model, we get 9,638 units in December, so…I guess over 100,000 units will be impossible for the Aion S in 2020, something that the Tesla Model 3 should also be able to reach, thanks to the start of local production in Shanghai (The first 30 Made-In-China units were delivered in December).


But another important metric for the Shanghai Auto electric crossover is the behavior in overseas markets, with the Sino-British EV scoring close to 2,000 units in export markets, last month, the best result ever for a China-made EV.


In fact, this electric crossover has several waiting lists to be fulfilled outside China, after all there are already 2,100 orders for it in India, even before it landed there, while in the UK, I heard the interesting story that days after the price being announced in the UK, a few months ago, MG representatives were already asking for more units to the HQ in China, as the 2019 allocation had already been fully booked…As it seems demand won’t be a problem for it, we have a question:


With a ruling presence in the City EV field with the Baojun E-Series, and the MG eZS EV succeding both in the domestic and export fronts, SAIC is becoming a fierce rival for both BYD and BAIC, and we could even see it overcome them during 2020.


(General Motors could profit from the rise of Shanghai Auto, considering the special relationship it has with it, but for that to happen, GM management would need to play its cards right, something that it has failed to do when comes to electric cars…)


Speaking of General Motors, among the several good results outside the Top 20, the Buick Velite 6, GM’s (stylish) twin to the Roewe Ei5, had a record month in December, with 1,005 units. Will the Buick electric station wagon finally start to sell in significant numbers this year?


Also outside the Top 20, a mention to the ramp-up of the VW e-Lavida, now at 3,872 units, while the Audi Q2L e-Tron registered 1,049 units in only its second month on the market. Volkswagen Group is rising…


A final reference to the 3,455 units of Dongfeng’s Venucia D60 EV, will this new electric sedan become the maker’s bread and butter EV?

Looking at the sub-categories, the BYD Tang PHEV was this year Best Selling PHEV, succeeding its stablemate BYD Qin PHEV, the Baojun E-Series was the 2019 Best Selling City EV, replacing the BAIC EC-Series, while on the full size categories, the BMW 530Le repeated last year Best Selling Car trophy, while the Tesla Model X this time managed to outsell (9,400 vs 8,900 units) the 2018 Best Seller Nio ES8, recovering the title that had belong to it in previous years.

Despite this setback, Nio kept the Best Selling Startup title, thanks to the recent success of the midsize ES6 (2,537 units in December alone).


Outside the podium, Geely (6%) ended far from the podium, and had to keep a close eye on GAC (5%), in order to keep the 4th position until the end.


Interestingly, the podium performers have been repeating these exact same positions since 2017, but by the look of things, 2020 will be a much more balanced race in the manufacturers ranking, with the Top 3 makers closer today than in the past, and GAC and Tesla (and Volkswagen?) running as dark horses. 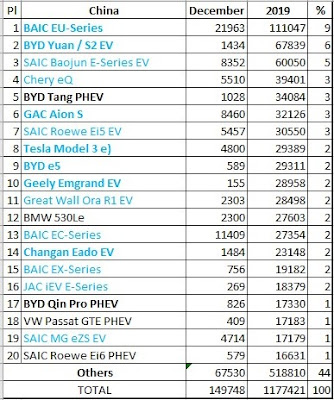