The Dutch market started 2019 on fire, as January had 3,271 plugin registrations, doubling sales YoY, which translates in a PEV Share of 6.9%, and this is before the oficial landing of the Tesla Model 3...But more on that later.

This good market performance was the result of several good individual results, starting with the Best Seller of the Month, the VW e-Golf, that registered 653 units, repeating the good start of 2018, with the BEV now representing one third of all VW Golf deliveries.

But the surprise of the month was the Kona EV (where have heard this one before?), that delivered a record 536 units, or 79% of all Kona deliveries in this market, with a few thousand orders waiting to be fulfilled, the Korean Crossover is presenting itself as the strongest candidate for the Silver Medal this year, behind the Tesla Model 3. But more on this last one in a few moments...

The Nissan Leaf was 3rd, with 396 deliveries, keeping the previous year good pace, while the Mitsubishi Outlander PHEV surprised everyone by delivering 322 units, its best result since 2016, winning already precious advantage over the rest of the PHEV competition, in the race for the 2019 edition of the category trophy.

Without the shackles of battery constraints, the Renault Zoe and Hyundai Ioniq Electric continue racking up sales, with the French hatchback hitting a record 237 registrations, while the Kia Niro EV is already in the Top 10, with 155 deliveries.

Outside the Top 10, the Land Rover siblings scored close to 100 deliveries in one month, not only a new record, but also representing 90% of both nameplates total deliveries.

Last, but definitely not the least, the Tesla Model 3 shows up in #13, with 40 deliveries, no doubt still demonstration units that were distributed across Europe for test drives, with some 3,000 final orders said to be already made in The Netherlands, the Californian midsizer is sure to take the 2019 Best Selling EV title, and probably also the Best Selling midsizer prize.

Outside the Top 20, a mention to the BMW i8, with 12 registrations, that managed to beat the Porsche 911 (10 units), losing only to the Mercedes-AMG GT (13) the title of Best Selling Sports Car.

In the manufacturers ranking, Hyundai started the year in the lead, with 21% share, closely followed by Volkswagen (20%), while Nissan (12%) closed the podium, ahead of Mitsubishi (10%). 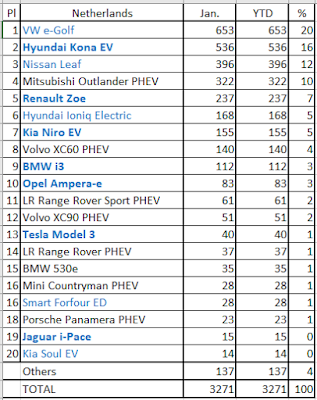 
Comparing this ranking with January '18, there are significant changes, back then, the best selling plugin (VW e-Golf) was 3rd, with only one other plugin (Hyundai Ioniq Electric) present in the Top 5.

Now, it's the other way around, the best selling hybrid (Kia Niro HEV) is only 3rd, with only one other hybrid (Yaris) among the Top 5.

How the tables have turned...Hear that, Toyota?
Published by José Pontes at February 07, 2019