With the overall French market slowly returning to normal (last month it was down just -50%), plugin sales are also returning to form, with registrations up 77% YoY in May, to 7,167 units, with PHEVs (+134%) faring better than BEVs, up only 50%, allowing plugin hybrids to have 43% of the plugin market last month, well above this year average (29%).

When one looks at last month Best Sellers, after losing in April the monthly Best Seller title for the first time in 7 (seven) years, the Renault Zoe is back in the lead, winning last month Best Seller trophy with a 486 units advantage over the new eternal runner-up, the Peugeot 208 EV, with PSA hoping to ramp up its production during the following months, in order to tickle again the Renault Zoe lead...Will they be able to do so? To be continued...

We have a surprise in the 3rd spot, profiting from increased availability coming from its recent Czech Republic production, and the lack of fresh units in Tesla delivery centers, the Hyundai Kona EV won May's Bronze Medal, its first in the French market, winning also its first Best Selling Foreigner award. A sign of things to come?

Another surprise, just off this Top 5, is the Mercedes GLC300e showing up in #6, with 263 registrations, the midsize SUV best performance since November 2017. Interestingly, its BEV sibling, the EQC, had only 10 deliveries in the same period. Mmmm....

Looking at the 2020 ranking, nothing significant happened in the top spots, with the first position change happening only in #8, with the rising Hyundai Kona EV surpassing its cousin Kia Niro EV, and with the #7 Peugeot 508 PHEV just 27 away, the Korean crossover should continue climbing positions in the near future.

But the Climber of the Month was the Mercedes GLC300e, that jumped 4 positions to #14, and expect the three-pointed-star SUV to continue climbing positions, maybe already displacing the #12 Porsche Cayenne PHEV in June.

Despite the slower BEV growth in May, compared to PHEVs, the 2 new entries in the Top 20 are of the BEV variety, with the hot (hatch) Mini Cooper EV showing up in #19, thanks to a record 191 deliveries, while an increased battery availability has allowed Peugeot to ramp up the production of its 2008 EV small crossover, having registered 151 units in May, a new high, allowing the much antecipated model to join the table, in #20.

Expect both models to climb further positions in the coming months, especially the Peugeot crossover, that could reach a Top 10 position, some time in the future.

Finally, regarding future new entries to the Top 20, the Ford Kuga PHEV continues to impress, having delivered a record 162 units, while the BMW X3 PHEV is also starting to be noticed, with the midzise SUV registering 124 units in May, a new Personal Best, while the VW EV triplets (VW e-Up, Seat Mii EV and Skoda Citigo EV) continue delivering significant amounts of units, if counted together, they would be #13, with 682 units (343 e-Up, 173 Citigo, 166 Mii).

It looks like the Alliance is in trouble, doesn't it? 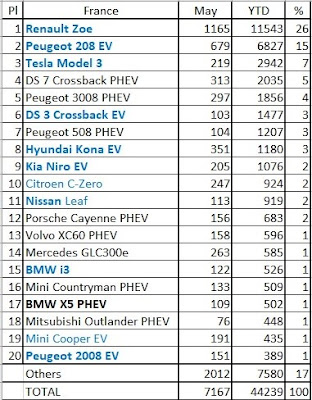