Tesla Model 3 #3 in the overall market.

In July, the leader Tesla Model 3 (590 units) had its best first-month-of-quarter so far, so prospects for beating the all-time BEV record from a single model (2,621 units last December), currently in the hands of the Jaguar i-Pace, look good. Can't wait to know the September results…

But back at July, if the 2nd place of the Hyundai Kona EV is not surprising (insert battery constraint comment), the 3rd spot of the VW e-Golf is, and the German hatchback did it with 231 units, its best result since January, a meritable result for a model in sunset-mode, which leaves great prospects for the upcoming ID.3 (if VW manages these level of sales with a  veteran and overpriced model, imagine how high will they reach with a competitive EV...)

A bit surprisingly, the Nissan Leaf, despite the injection of the 62 kWh version units, failed to reach the Top 5, ending the month in Sixth, just behind the niche (and ageless) BMW i3.

Checking the Japanese hatchback registrations in detail, most of them continue to be of the 40 kWh version, so either volume deliveries of the 62 kWh version are still to come, or the longer range version is not the success Nissan had hoped for.

Looking ahead, the future of the Nissan EV looks somewhat bleak, squeezed from above (Tesla Model 3), and below (revised Renault Zoe, Peugeot 208 EV, Opel Corsa EV), the arrival of the VW ID.3 should hit it full frontal, and only deep discounting could keep sales coming in, for a model that by then will be pretty long in the tooth. Now, if Nissan wants to follow that path, is a whole different subject...

Looking at the 2019 ranking, the Tesla Model 3 sits high above everyone else, with almost triple the sales of the #2 Hyundai Kona EV, in fact, the Tesla midsizer is now the 3rd best selling model, all models counted.

If the  overall leader VW Polo (7,974 units) seems hard to reach for now, the #2 Ford Focus (7,359) is not that far away, and considering Tesla's sports sedan is expected to have a stronger second half of the year, the runner-up spot could still fall into the Model 3 lap.

There wasn't much to talk about in the top positions, in fact, we have to go down to #16, to see position changes, with the Volvo XC90 PHEV climbing one position, while the Mini Countryman PHEV did the same, in #18.

Highlighting Tesla's good moment, the Model S returned to the Top 20, in…#20, thanks to 21 deliveries last month, its best first-month-of-quarter this year, while its Model X sibling also had a positive month, with 18 deliveries, also a first-month-of-quarter year best, with the Sports-Minivan-CUV now only 24 units away from the Top 20, so if the recovering sales continue, we could see it back at the Top 20 soon. Maybe in September?

With the Model S now in the Top 20, we have 13 BEVs vs 7 PHEVs in the Top 20, and with the all-electric field said to increase in the coming months (Tesla Model X, Kia Soul EV, Mercedes EQC...), i think we are close to a non-returning point, where plugin hybrids will be residual in this Top 20.

Oh, and because i love factoids, here's another one that i picked up: The i-Pace is the best selling Jaguar in Dutch lands...

In the manufacturers ranking, Tesla (32%) is the clear leader, followed by Hyundai (15%), while the race for the last podium place is hot, with Kia (9%) running ahead of Volkswagen and Nissan (both with 8%). 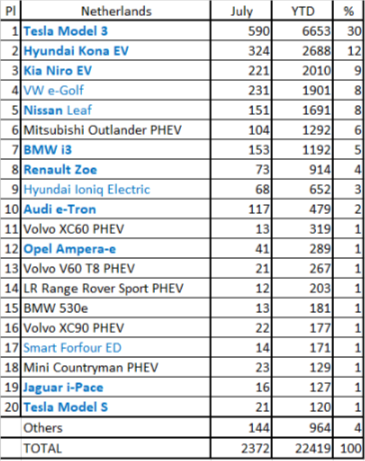 
Comparing the Model 3 deliveries against its midsize premium competitors, there's really no doubt on who is Top Dog, with the Tesla nameplate doubling sales of the #2 BMW 3-Series.

For comparison sake, the PHEV version of the Volvo S/V60 twins represents less than 10% of sales (9%, to be precise), so even if the 330e reaches a 10% share of the total 3-Series sales, the increase will barely be visible in what is a large gulf between both nameplates.

Regarding the Tesla Model S & X, their behavior is far less impressive, as both are below their category Top 5, although the Model S is recovering ground, now in #6, only 31 units behind the #5 Porsche Panamera.

Interestingly, electrification gallops in different rhythms in the full-size vehicle segments, while in the car category, only one model in the Top 5 has more than 20% of its sales coming from plugins (#5 Porsche Panamera, 73% of sales come from the PHEV versions), in the SUV category, only one model (BMW X5, 0%) has less than 45% plugin sales, with most of the Bimmer sales previsibly transferring to the PHEV version, once it becomes available. And we even have a BEV in the SUV Top 5: the Audi e-Tron is the 2nd Best Selling full-size SUV in the Netherlands.