This memorable performance last month translated in a BEV Share of 20% in September, placing the 2019 EV share at a record 9,6%.

So it is official: We have yet another market north of the famous 10% mark, after Norway, Iceland and Sweden, we now have the Netherlands.

In September, the leader Tesla Model 3 had its best performance outside the US, with an amazing 5,768 units, becoming not only the Best Selling Vehicle in this market, all fuels counted, but also smashing the almost 6 year old monthly plugin record, that dated back from December 2013 (Mitsubishi Outlander PHEV - 4,957 units).

Looking at the remaining players, the #2 Hyundai Kona EV also shined, with 510 registrations, its best result since January, while its cousin Kia Niro EV reached the podium last month, with 300 deliveries.

A good result for Kia Netherlands, but not so good for the remaining Kia European importers, that are watching several units of the highly desired EV crossover being diverted to Dutch roads...Well, for them, i have a message: Knock on the Kia Mothership gates and demand more units. Many more...

Looking at the 2019 ranking, a special mention to the fact that the stellar performance of the Tesla Model 3 in September allowed it to become the best selling model, all models counted, with a 4,000 units advantage over the #2 VW Polo.

So together with their Norwegian colleagues, Tesla's Dutch representatives can start to prepare their own 2019 Best Selling Model party...

In the PEV Top 10, everything looks stable, with only the #10 Audi e-Tron, #6 in September, having a chance to stirr things up, having cut the distance to the #9 Hyundai Ioniq Electric by 76 units, to just 109 units.

The second half of the ranking is definetely more interesting, with the Volvo XC90 PHEV climbing to #14, thanks to 40 registrations, its best result since January, while the Smart Forfour EV (43 units, personal best) was also up one position, to #16.

The Tesla Model S was up 2 positions, to #17, thanks to 66 deliveries, its best result in 2019, while the Model X is only 5 units behind the #19 Jaguar i-Pace, thanks to a year best performance in September, with 56 units. Overall, a great month for the whole Tesla lineup… 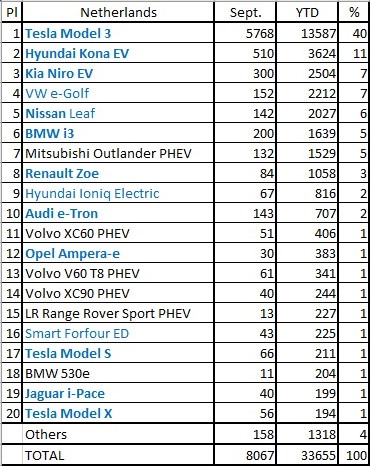 
You might have read plenty of articles about how the Tesla Model 3 is kicking ass butts in The Netherlands, but probably haven't read yet the underlying story behind it, that is the quick electrification of the most expensive segments of the Dutch market. So...here it is:

While the Tesla Model 3 is the undisputed leader in the midsize car segment, the correspondent SUV category is also being electrified swiftly, with the electrified Volvo XC60 (39% of sales belonged to the PHEV version) leading, with 155 units, while the Mitsubishi Outlander PHEV was the runner-up in September, with 132 units (97% of all Outlander registrations).

To highlight the current electrification, the all-electric Jaguar i-Pace was #5, just 3 units behind the #4 Mercedes GLC. Not bad, eh?


If the midsize SUV is getting electrified fast, even without the Tesla Model Y and VW ID.4x, in the full size car category, things are less advanced, with only the Tesla Model S disrupting the status quo, as the other two electrified models, the BMW 5-Series (6% of registrations belong to the PHEV version), and the Volvo S/V90 twins (9%), have a low share of plugins.

The Porsche Taycan  will be a welcome addition to this category...


The full size SUV category seems to be the most advanced segment when it comes to electrification, not only we have 2 BEV nameplates in the Top 5, but the other electrified model, the Volvo XC90, has 68% of its registrations coming from its PHEV version.

Add this to the fact that the #2 BMW X5 is going to receive an interesting PHEV version in a few weeks, and that the Porsche is said to re-launch the PHEV Cayenne soon, and we could have a completely electrified Top 5 in a few months.