Model 3 Superstar - Norwegian Edition
Last month, BEVs registrations were up (+27% YoY) in September, while PHEVs continue their never ending slide, sinking 28% YoY last month, and even HEVs were also down (-9%), but hybrids weren't alone alone in the naughty corner, as regular diesel (12% share in September, 16% YTD) and petrol (10% last month, versus 16% a year ago) kept sliding, while BEVs (55% share in September) just keep on winning share (they had 45% a year ago).


Looking at the PEV share, September recorded 65% share, 9% above the 56% YTD result, and expect this value to continue growing until the end of the year.

Regarding the September Top Sellers, the Tesla Model 3 was the clear winner, with 2.342 deliveries, so it is with some antecipation that we will see how the demand of the midsize sports sedan becomes in the last quarter of the year, will we finally see the organic demand showing up, or will the Netherlands eat up most Model 3 units in Q4, starving the rest of Europe? If so, we should see a strong Q1 2020 for the Model 3 in Norway, something the Tesla nameplate could use, so that it can be better prepared for the landing of a certain VW ID.3...

Speaking of Volkswagen, despite all the talk about the new ID.3, the existing e-Golf continues to impress, reaching #2, with 645 units, surpassing the Nissan Leaf, that despite hitting 585 units, it had to settle with the last place of the podium. Is the Japanese model becoming irrelevant?

The Audi e-Tron scored another Top 5 performance, with 476 registrations, and with the all-electric SUV said to have a cheaper version coming soon, expect it to start collecting regular podium positions. 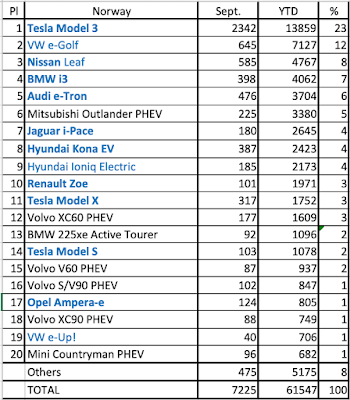 Looking at the 2019 ranking, the top positions seem stable, although the #5 Audi e-Tron could put the #4 position of the BMW i3 in danger towards the end of the year, same as the #8 Hyundai Kona EV. regarding the #7 Jaguar i-Pace.

The #11 Tesla Model X could also surprise and assure a Top 10 presence, but then again, it will all depend on how Renault makes the transition for the revised Zoe.

On the lower half of the ranking, the Volvo XC90 PHEV yacht SUV climbed one position, to #18, one of the good news for the PHEV side.

Another plugin hybrid on the rise is the Mini Countryman PHEV, that rejoined the ranking, in #20, thanks to 96 registrations last month, that allowed it to surpass the starved Kia Niro EV, now making 7 PHEVs in the Top 20, 4 of them from Volvo.

Outside the Top 20, a mention to the Mercedes EQC, that is (very) slowly starting to ramp up deliveries, having registered 48 units in September.

Looking at the manufacturers ranking, Tesla is uncontested leader (28%, up 2%), being followed by Volkswagen (13%), while BMW (10%, up 1%), has managed to win the 3rd spot over Hyundai and Nissan (both with 9%), but the German carmaker still has plenty of obstacles to overcome, it if wants to keep the Bronze medal. 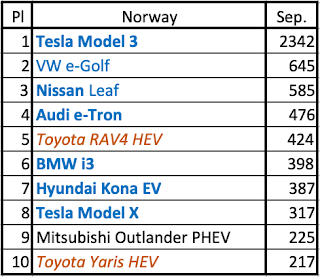 September was a strong month for plugins, and it shows, with only two unplugged models, both coming from the Toyota hybrid stable, with the RAV 4 hybrid in #5 and the Yaris in #10.

The top 4 spots were 100% BEV, with all-electric models continuing to be the majority of models (7 out of 10).

There was only one PHEV model here, with the Outlander PHEV reaching #9, a low position that says a lot about the current PHEV fall from grace...