Looking for EVs - From Portugal to Italy

This year, on our post-summer road to Sweden, instead of doing the shortest way there (PT-ES-FR-BE-NL-DE-DK-SE), we decided to make a small (big) detour, and followed the Mediterranean Sea until Italy, then we went through Italy on out way to Budapest, then headed north to Wroclaw, Poland, to visit some friends, and finally went on our way to Sweden.

So i decided to check out how the EV fauna looked like along the way:

Portugal - After leaving Aveiro and passing by one Nissan Leaf and a Renault Zoe in the suburbs, i only saw a new EV in Viseu, in this case, a BMW i3, something that confirmed my assumption that electric cars are still an urban thing;


Spain - Saw one Renault Zoe in Salamanca and...nothing else until Madrid. Spain's wide open spaces are an EV desert.

In Madrid, EVs returned, with 2 Zoes and 1 BMW i3, all company cars.

After leaving Spain's capital, we returned to the EV desert, until getting close to Barcelona, not only the landscape looks different, and EVs start to pop up left and right, with the first Teslas starting showing up, one Model S, two Model S, one Model 3...

Car-sharing is also relevant, while local taxis and police cars are hybrid Toyota Prius, it's like this city lives in a different universe than the rest of Spain!

France - Crossing Southern France highways, both Teslas (2 Model S, 1 Model 3) and PHEVs (2 Outlander PHEV, 1 Mini Countryman PHEV) were possible to be seen, but when we arrived to the Nice and Cannes area, we noticed once again that urban areas continue to be BEV's natural habitat: there we saw 4 Renault Zoe, a couple of Twizy (Twizzies?), one Peugeot iOn, one Kona EV and the e-Mehari, seen above.

Funny enough, in this area, apart from a Model S, we saw no Luxury EV around, but we did saw some vintage cars, one Lanborghini, a couple of Ferraris...

In Monaco, the most common EV was the Renault Twizy, with several units of the tiny two seater fighting space with countless scooters, while other small electric cars were also popular (4 Smart EV, 2 Zoe, 2 BMW i3...), but it seemed as larger the EV is, the less common it becomes (2 VW e-Golf, 1 Peugeot Partner EV van and 1 Tesla Model X).

As a final note, the parking lots have so much diversity, that deserved a post of their own. But because we don't have time, look at the picture above... 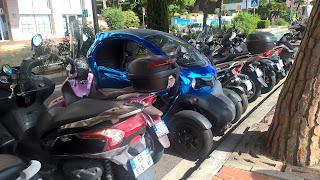 Italy - Not a lot to talk about, as the low EV share is visible by its absence on Italian roads, we saw just one Panamera PHEV (i think it was the PHEV version, we could only see for a few seconds, before disappearing in the horizon...), one VW Passat GTE (with Dutch license place, so it doesn't count), and a Model 3.

The best thing road tripping Italy was actually listening to Virgin Radio, airing some of the best classic rock tracks on Earth, ideal for the kind of travelling we were doing.
Published by José Pontes at October 02, 2019