During my stay in China to see the gigantic Auto Shanghai motorshow, i had the chance to witness the popularity of plug-ins in the busy streets of Shanghai, and also something that we do not get to understand looking at sales at national level:

The EV Scene varies a lot in China, according to which city you are.


If you are in Beijing, BAIC (Aka Beijing Auto) is the most popular, in Shanghai it is SAIC (Shanghai Auto), while down in the South, BYD rules supreme...

Looking at the Shanghai streets, the most popular plug-in is the local SAIC Roewe 550 PHEV, also known as e550, but i saw also a surprising number of BYD Qin, all PHEV, all in white colour.

These two were the most common EV's in the street, which together with the random BYD Tang (In white, or course, what's with Shanghai BYD buyers and the white colour?!?), made up for 90% of plug-ins seen.

Besides these, i saw one BAIC EU260 (Guess what? In White) and a couple of Teslas (Two Model S and one Model X), these last ones zooming around the Pudong Financial District. 
This is home of BYD Headquarters and it shows. In this sort of Chinese "Sillicon Valley" (Even the local Airport is a fine work of Architecture), the only plug-ins you see are from the local automaker, i dare to say that half of all taxis in the city are BYD e6, many of them with battered interiors but with their electric range in the 200/300 kms and..."Spirited" drivers.

Also, around one in three buses were electric, but funny enough, not all of them were of the BYD variety. 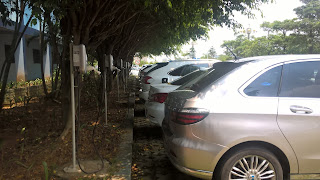 While there, i had the opportunity to visit the BYD HQ, where besides the integrated vision they have on carbon-free energy and mobility, i was struck by something i had only seen in Norway: A dedicated parking lot where EVERY parking space was equipped with a charger.

How is that for an employee benefit?

Email ThisBlogThis!Share to TwitterShare to FacebookShare to Pinterest
Labels: China, Looking for EV's