55% PEV Share!
Despite not hitting March's record sales, mostly due to the PHEV slump (-27%), the sales drop (-7%) on the mainstream market, originated by the previous WLTP-sales rush, has lead to large BEV (39%) and PEV (55%) shares, and the share could have been even more outlandish, if this result had happened on an end of quarter, as we would had the help of the Tesla Tide. Maybe in December?

In this context, 2019 should see Norway get some 66% PEV share, with peak months possibly reaching 80%. Ambitious? Possibly, but this year market share is already at 52%(!), and next year we will see the Tesla Model 3 cross the ocean, a 60kWh Leaf, the Kia Niro EV, first full year of the Hyundai Kona BEV, etc...Now, it doesn't sound so outlandish, does it?

Looking at last month Top Sellers, all five models here had reasons to smile about, if the leader Nissan Leaf made its best result in the last 7 months, with 1.292 units, the VW e-Golf recovered its mojo a scored 978 units, a new Year Best, while the BMW i3 had also its best month since March. Interestingly, October's Top 3 were in the same order as the 2018 table.

Outside the podium, the #4 Volvo XC60 PHEV was the the best selling PHEV, a category that is falling out of favor, but nevertheless, the Swedish SUV hit a Year Best in October, thanks to 473 units.

The Surprise of the Month was the Jaguar i-Pace surging to #5, with the British SUV finally living up to the market high expectations.

A reference for the #6 Renault Zoe, thanks to 411 deliveries, its best result of 2018, although it had a little (big) help from a fleet deal, where they delivered some 100 units to NSB car sharing company, considering the number of car-sharing deals that Renault is making with the Zoe, Europe-wide, one might say that the French hatchback has the right ingredients (low-price, big range, right size) for that kind of fleets. 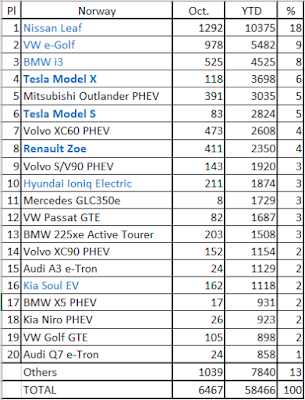 Looking at the 2018 ranking, the most important news is the Mitsubishi Outlander PHEV returning to the Top 5, keeping just enough distance from the #7 Volvo XC60 PHEV to keep it as the favorite for the 2018 Best Selling PHEV title, which would be its Fifth title in a row.

The Hyundai Ioniq Electric climbed to #10, now making 7 BEVs in the Top 10, which says a lot about the transformative moment that this market is having, not only PEVs are now the majority of sales, but BEVs (+69%) are absorbing sales from PHEVs too.

Proof of the BEV mommentum is the Kia Soul EV, that is said to know its sucessor early next year, but nevertheless, it is still running to climb a few positions (#14?) by year end.

A final reference to the 441 registrations of the Jaguar i-Pace last month, with the Electric SUV representing 96%(!) of all Jaguar sales last month...At this pace, expect it to reach the Top 20 in November, having this month surpassed another potential Best Seller, the Hyundai Kona EV, that is still struggling with production constraints, having delivered only 54 units in October.

Looking at the manufacturers ranking, Nissan is in the lead (19%, up 2%), but is closely followed by BMW (15%), Volkswagen (15%, up 1%) and Tesla (11%, down 1%), so at first sight, the Japanese automaker should need to keep a close eye on them to remain with the Gold Medal, but because PHEVs are a big part of the German pursuitors, they will have a harder time selling in the last quarter of the year, so Tesla might even get ahead of them and end 2018 in the runner-up position. 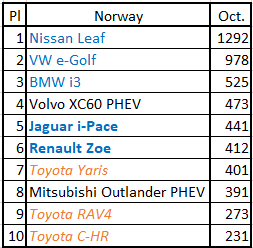 With the PEV share at 55%, the plug-in market continues to merge with the mainstream, breaking down sales by fuel source, we have three BEVs in the podium, followed a balanced mix, with 2 BEV, 2 PHEVs, 3 HEVs and no ICE models in sight, but the telling story is that the Best Selling HEV (Toyota Yaris) was only #7, with the remaining hybrids ending behind it.


One interesting stat regarding the record 45% BEV share of September, was the fact that four regions (Hordaland, Oslo, Rogaland and Akershus) had over 50% BEV share that month.

Unsurprisingly, all of them are on the South of Norway, where there is a milder climate.

What is a surprise is the fact that Troms, way up North, had 32% share, when the neighboring region of Finnmark had only 14% share.

After digging up a little, i found the reason for that, Tromsoe, the capital of the region, has a city toll-ring, which is proving to be a decisive factor for EV-adoption in many cities across Norway.