Meanwhile, the mainstream market continues sliding, dropping 12% last month, with the WLTP blues seemingly having no end in sight.

Now about charging infrastructure...It is badly needed, especially for long trips, without it, PHEVs will still be around for a while.

Right now buyers are running away from fossil-fueled vehicles, with diesels at 39% share last month, with a stampede-like movement into plugins, and BEVs in particular, but because BEVs are still model/production constrained, it seems many people prefer to buy a PHEV, or wait in line for a BEV, than to buy/lease another ICE-based vehicle.

Looking at last month Best Sellers, the Tesla Model 3 repeated the previous month win, although this time the race was closer, with the #2 Kia Niro PHEV only 144 units behind.

Another Kia, the Optima PHEV, closes the ranking, with 289 registrations, most of them station wagons, proving that Tesla's choice for a sedan body is costing it sales in Europe, and in this particular case, in Sweden, a wagon-friendly market.

On the 2019 ranking, there is not much to talk about, on the top positions, the Tesla Model 3 is looking to catch the leader Mitsubishi Outlander PHEV (maybe it get there in June?), followed by two Kias, with the Niro PHEV in 3rd, and the Optima PHEV in 4th.

The surprise of the month was the Tesla Model S,jumping three spots, to #14, thanks to 90 deliveries, a new year best, that is all more surprising once you realize it was made in the first monh of the quarter, usually a slow month for Tesla.

In the last places of the Top 20, the #19 VW e-Golf scored 52 deliveries, the model best score this year. It seems the soon-to-be-departed EV still has some tricks up its sleeve. 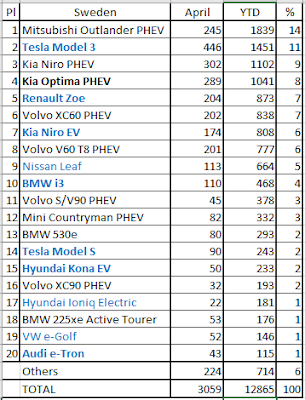 After a thunderous arrival in March, the Tesla Model 3 also made na impact in the midsize car category, already showing up in #4 on the 2019 category ranking, with the Second Place in its range of possibilities. Of course, the Volvo S/V60 series leadership is out of the equation (quite naturally, i would say, i mean, its a Volvo...in Sweden).

In #5 we have the BMW 3-Series, that needs desperately the 330e version to avoid the sales bleeding…And let's not even mention the Audi A4, the lamest duck of them all.

A bit off-topic, but the 3rd best selling full-size car, the BMW 5-Series, registered 1.419 units this year, while the leader Mercedes E-Class registered 1.810 units, so this is one of those markets where the Model S numbers should grow significantly, as there is plenty of room for it.