Looking at May Best Sellers, the Mitsubishi Outlander PHEV surprised everyone by earning last month Best Seller award, thanks to 957 registrations, a new record for any plugin hybrid in this market. Like in other markets, it seems the Japanese SUV is the only PHEV able to run at the same pace as the best selling BEVs.

The #2 BMW i3 scored a record performance last month, with 878 units, an impressive performance from the German hot hatch, with BMW placing another model in the Top 5, with the 225 Active Tourer reaching the 5th place, with 450 units.

Another model shining in May was the #4 Smart Fortwo EV, that registered 495 units, its best result in 14 months.

There's always much to talk about in the German PEV market, which is known for close races and constant changes, and last month was no exception, first of all, in May the Renault Zoe recovered the leadership from the hands of the Tesla Model 3, but Tesla's June peak should help the sports sedan to recover ground over the Renault hatchback, and possibly overcoming it. Again.

The expected deliveries peak from the Model 3 should also prevent the ever improving  #3 BMW i3 from climbing another position.

The Smart Fortwo EV and the Audi e-Tron were up one position, to #7 and #8, respectively, with the tiny two seater now going after the 6th spot of the BMW 225xe A. Tourer.

Highlighting the Daimler Group positive month, the Mercedes E300e/de PHEV twins keep on jumping positions, now up to #12, thanks to 397 deliveries, the model best result in over a year, putting pressure over the full-size car leader, the #10 BMW 530e, with the big Bimmer registering 360 units last month,  a new year best.

Interestingly, the E300 PHEV smaller sibling, the C300 PHEV, is still stuck in two digit performances, which could mean that Mercedes has a limited number of batteries and is favoring the larger (and more profitable) E-Class.

Speaking of batteries, the all-new EQC SUV, the most recent reinforcement for the Mercedes squad, had 93 registrations last month, no doubt demonstration units, but expect these numbers to grow over time, with the limit probably being first set by battery constraints, than actual demand.

Outside the Top 20, we should mention the 86 deliveries of the Jaguar i-Pace, with the British Sports-Crossover-SUV-Thingy, now in #21, just 10 units away from joining the Top 20. 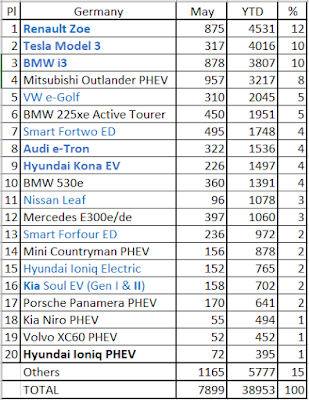