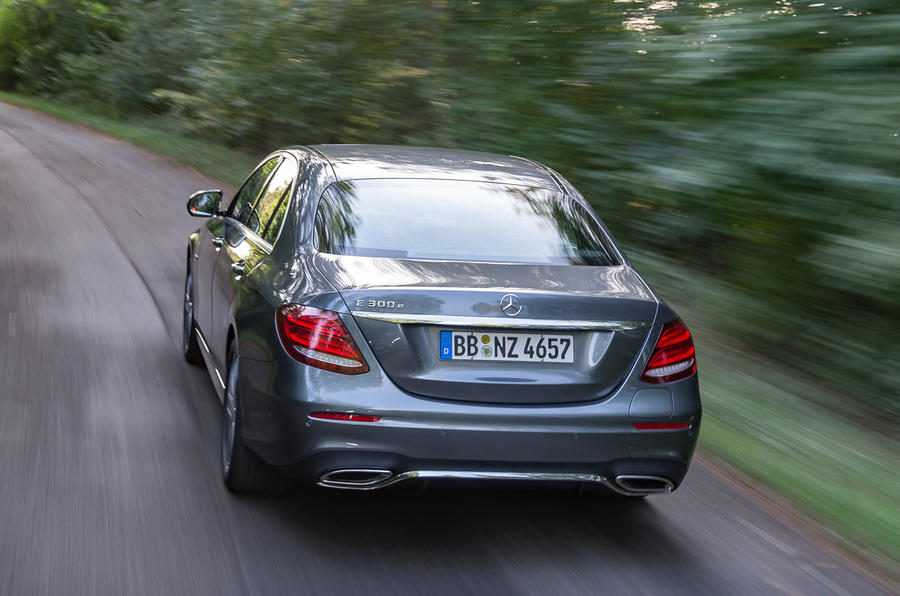 Some kind of click happened in the German plugin market after the Summer holidays, having scored a record month (9,452 registrations) in September, October came and yet a new record was set, this time 26%(!) above the previous one, with 11,926 being registered, more than doubling last year result, with China's PEV market in post-subsidies blues, this is a welcome boost to global sales, now if only the US market helped to carry the burden...

October brought a surprise leader to the monthly leadership, with Mercedes opening the flood gates to the E300e/de twins, and the luxury twins hitting 1,564 deliveries, a new monthly record for any plugin hybrid in Germany. Suddenly, the current PEV record of the Tesla Model 3 (2,224 units, last March) doesn't seem so unattainable...

But the Daimler Group didn't stopped there, with the smaller Mercedes C300e/de coming out of nowhere to 3rd, with 748 units, a new record for the midsize nameplate, while both Smart models also shined, with the smaller Fortwo EV ending the month in 4th, with 746 units, its best result since December '17, while the slightly larger Forfour EV reached 320 units, its best score in 19 months.

The remaining two spots in the Top 5 went to the local heroes BMW i3 (#2, with 861 units), and VW e-Golf (#5, 723), with the last one continuing to impress by its vitality, even with its successor showing up in bilboards everywhere.

Regarding the YTD table, remember last month when i said the BMW i3 only had 10% of becoming the 2019 Best Seller?

Well, things have changed for the better for the Bimmer, with the leader Renault Zoe scoring just 458 units last month, its lowest result this year, due to the current generation change, and the Tesla Model 3 delivering the usual slow (221 units) first month of the quarter performance, the German hatchback took the opportunity to displace the Californian from the runner-up spot, while at the same time it reduced the distance to the leader Renault Zoe to just 124 units.

With only 2 games (months) to play, this is now a 3 horse race, with only 431 units separating the top 3, the BMW i3 continues to depend from two unknown variables: how fast will the new Zoe be delivered in large volumes, and will the Model 3 allocation be impacted by the inflated deliveries in the Netherlands.

If the Zoe and Model 3 underperform next month, then the BMW i3 could earn just enough distance to sustain the December peaks of its two competitors and win the Best Seller prize.

One thing is certain, this is probably the most exciting race among the top markets, so don't forget to bring the popcorns...

Outside the podium, there's plenty to talk about, the Mercedes E300e/de twins jumped 4 positions, to #7, and could even aim for a Top 5 spot until year end, and despite its arch rival BMW 530e also scoring a personal best, its 543 units pale next to the 1,564 of the Mercedes...Anyway, not all is bad, as this performance allowed the 5-Series to climb to #9.

In fact, this result from the 530e was just one out of many record results in the BMW stable, as the Bavarian carmaker, apparently also opened its PHEV gates, leading to record results in 5(!) of its plugin hybrids, besides the aforementioned 530e, the 225xe Active Tourer (592 units), the new 330e (438 units), the new X5 PHEV (76) and even the 745e barge (129) hit their personal bests last month.

But the PHEV resurgence didn't ended there, with the #14 Mini Countryman PHEV scoring a record 321 units, while the #20 Volvo XC60 PHEV scored a new personal best performance for the 2nd time in a row (158 units).

If we see good performances coming from plugin hybrids on the Top 20, outside the ranking the numbers are also significant: the new Audi Q5 PHEV did 147 registrations, while one of the surprises of the month was the Porsche Cayenne PHEV hitting an amazing 596 units score, a new record for any Porsche nameplate.

In the middle of all these PHEV record numbers, there was one BEV also doing a personal best, with the revised Hyundai Ioniq Electric profiting from its first full month to score a record 269 units.

Outside the podium, we have Mitsubishi (8%), followed by Volkswagen, Mercedes and Hyundai, all with 7% share, and trying to catch the Japanese brand. 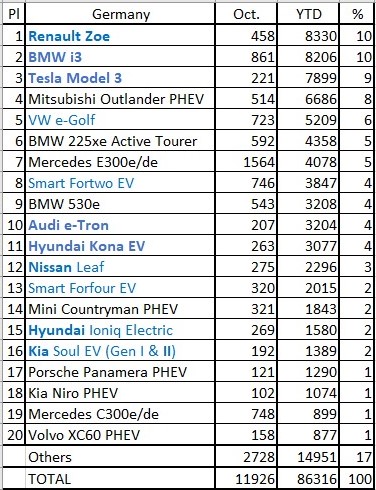 With the Tesla Model 3 in an off month, we have two models with a significant degree of electrification, with the leader Mercedes C-Class having 13% of sales coming from its PHEV versions, while the #3 BMW 3-Series has 10% share.

Outside these two, the #2 VW Passat only has 3% share coming from its PHEV version, but expect this to increase significantly in the coming months, while the #5 Skoda Superb is also said to start delivering its PHEV version in a couple of months.

Which will leave the Audi A4 as the only unplugged model in a few months...Until when?

If the Top 2 models are (still) very much ICE models, the following ones are already electrified, in various degrees, from the 8% PHEV share of the Audi Q5, or the 10% of the Volvo XC60, to the 61% of the Mitsubishi Outlander.

This last performance begs the question: When will Mitsubishi make the Outlander an entirely plugin model?


Funny enough, with the exception of the #2 Audi A6, all other models have PHEV versions, and this month we have some pretty decent shares in their overall sales, with the leader Mercedes E-Class hitting 28%, the #3 BMW 5-Series reaching 17%, the same value of the Volvo S/V90 twins, and while tied in #5, with 378 units, the flagships BMW 7-Series and Mercedes S-Class have very different plugin shares in their portfolio (34% for the BMW, 9% for the Mercedes).

The full size SUV category is also increasing its electrification share, with the leader BMW X5 slowly increasing its plugin share (6% of sales now come from the PHEV version), and the #5 Volvo XC90 growing its PHEV share to 15%, all while the Porsche Cayenne increased significantly its electrification share (50% of sales!) last month. Is the Taycan success inspiring Porsche to move faster into plugins?

With the new long range PHEV version of the Mercedes GLE set to land soon, the BMW X5 PHEV expected to increase sales significantly in a couple of months, the VW Touareg will become the only unplugged model among the Best Sellers.

For how long, Volkswagen?
Published by José Pontes at November 14, 2019