The French PEV passenger car market registered 5,540 registrations in November, with BEVs dropping 10% YoY, to 3,201 units, but on the other hand, plugin hybrids (+80%) have taken the fast lane.


With plugin hybrids shining, BEVs saw their lead (70% vs 30% share), be reduced by 1%, but expect BEVs to rebound in December, thanks to the expected peak performances of the Top 2 models.

The leader Renault Zoe delivered 1,866 units in November, so it still not the big jump people expect, but January is right around the corner...(...and December should see all extra Zoe's head to the Netherlands).

Elsewhere, the usual podium bearers were displaced, with the Porsche Cayenne PHEV managing to beat the Nissan Leaf and end the month inside the podium, with 246 registrations, while the BMW i3 did even better, scoring a record result of 324 units, and winning last month runner-up spot.

BMW's pocket rocket performance is impressive, considering it is a six-year old model and despite that, it continues to see its sales grow and keep up with the best, so it seems the news of its death were greatly exxagerated...

If the first positions seems to be already carved in stone, from the #6 Kia Niro EV down, a lot can still happen, with the Korean crossover now in savings-mode, it should lose a couple of spots in December, to the Volvo XC60 PHEV and Mini Countryman PHEV, with the British crossover scoring 181 units last month, a new year best, allowing it not only to climb to #8, but also putting pressure on the Volvo model, just 9 units ahead, so we could see it reach the 6th spot in the last days of the year.

This was actually a great month for the BMW Group, not only the Mini Countryman PHEV and BMW i3 shined, but the BMW 225xe Activer Tourer was also up, to #14, thanks to a record 207 registrations, while outside the Top 20, the new BMW X5 PHEV scored 129 units, a new record in the rich-soccer-mom SUV career.

So, all in all, BMW saw 3 models hit record results in November. Not bad, eh?

But it weren't just the Bavarians reaching new heights, as there were other plugin hybrids shining this month, like the VW Passat GTE scoring a record 136 units, or the new Audi Q5 PHEV registering a best ever 76 units.

The Climber of the Month was the Porsche Cayenne PHEV, that with 246 registrations, stormed into the Top 20, in #17, so it seems the Sports-SUV is here to stay as one of the leaders in the current plugin hybrid resurgence, the unexpected second coming of the Cayenne profits not only from a second hybrid version (the top dog Turbo SE), but also from a new body choice, the Coupe, that finally gives the deserved sporty looks that matches the Porsche model talents. Oh, and i guess all the publicity that Porsche got with the Taycan unveiling didn't hurt either....

The Mercedes C300e/de twins also posted a surprising result, with the Mercedes midsize model registering 127 units, its best score in 19 months, but that is nothing compared with the shock surprise of the month, with the plugin hybrid VW Golf GTE coming back from the dead and registering 159 units!

And yes, i double checked this, and yes, it is the current Generation VII Golf, not the upcoming Golf VIII, so i guess this is a sign that in many markets the new Golf VIII PHEV will sell in large amounts, despite having to share the VW stage with the fancy ID.3 EV, so it looks like the next generation Golf still has a role in VW's Plan to Rule the (EV) World... 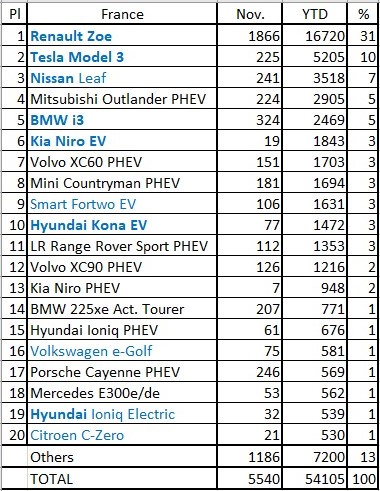