Plugins had another great month in China last month, with 104,000 units, a six-fold jump regarding the same month last year, although February 2020 had been heavily disrupted by the Covid pandemic, but if we were to compare with February 2019, last month would also mean a major jump in sales, as 2 years ago, we were celebrating 41,000 registrations in February...How times have changed, eh?

Last month plugin share reached 9% (7.5% BEV), pulling the 2021 share to 8.7% (7.3% BEV), and considering January and February are China's weakest months, we can now safely assume that the local plugin market will cross North of the two-digits mark this year, maybe even during the first half of the year!

Looking at February Best Sellers, we have 2 midsize models (the two Teslas), 2 City EVs (Wuling Mini EV and Ora's Black Cat), and one big sedan (BYD Han EV), with the highlight being the Tesla Model Y winning its first (of many) podium spots.

A big name for such a small car, the Wuling EV scored 20,167 units last month, effectively ending a 7 months records streak, but it was still a great result, as this score was still more than the 2 other nameplates in podium had combined, meaning that the tiny four-seater is to continue growing during the next few months, possibly reaching some 350k-450k units score by the end of the year. The reason for this success? Well, it is one of the cheapest EVs on the market ($4,400!!!), and yet, it’s not all that bad, as the SAIC-GM-Wuling joint-venture model can seat 4 people (or 3 people and a bit of cargo, or 2 with a fair amount of cargo – 741 liters), in car that is a tad larger (2,917 mm / 114.8 in) than a Smart Fortwo EV, sure, range is not brilliant (smaller battery version has 9.2 kWh battery, top spec version has a 13.8 kWh battery), just like the motor (27hp), but it has only 665 kg curb weight to carry around and is highway capable, so in order to have the 4,200 USD price, without subsidies, one can’t expect miracles... At this price level, the Wuling EV is in position to be a disruptive force in urban mobility, not only against 4-wheeled private transportation, but also against 2 and 3-wheelers. This EV could be a game changer, and not only in China...

The poster child for electric mobility hit 13,688 units last month, and while it’s not as high as one could expect, Tesla’s midsizer continues firmly above the 10,000 mark and should continue scoring 12k-15k performances in the near future. Unless, of course, its sibling Tesla Model Y starts to steal a significant number of sales from it...Interestingly, February was the probably the first time that the Model 3 has beaten the category Best Sellers in the overall market, as the Californian outsold the Audi A4 (9,000 units), BMW 3-Series (10,000), and Mercedes C-Class (11,000), so one might say that the Tesla sports sedan is getting closer to its goal.

Tesla's new baby hit 4,630 units last month, and while it’s not (yet) a Model 3-beating score, it means that the production ramp-up is going smoothly and should hit its peak during the second quarter of the year. Tesla’s midsize crossover future cruise speed in China is a question mark, while traditionally SUVs/Crossovers haven't sold as much as their sedan counterparts, the truth is that the market is leaning towards higher riding bodies, so the Model Y could surf the wave and outsell its Model 3 by quite some margin. Currently, the Premium midsize SUV Best Sellers in the overall market are the Audi Q5 (12,500 units), BMW X3 (10,900) and the Mercedes GLC (8,900), so we could expect the Californian jump to 10k-up performances soon, and maybe cruise at some 15,000 units/month speed this year.

Great Wall managers decided to grant its EV-only sub-brand Ora a Cat Pack, transforming its tiny R1 Smart-lookalike into the Black Cat, launching later the R2 model (think Scion XB/Toyota Urban Cruiser kind of vehicle) as the White Cat, and to lead the Pack, Great Wall has just launched the Good Cat, a chunky (and funky) compact hatchback (VW Golf sized) that kinda looks like a Porsche 356 in the front, a Toyota from the side, and the back...Well, it’s its own thing. And in good time they did it, because they had all 3 Cats in last month Top 20... But enough of the other Cats, we are here to talk about the Black Cat, that delivered 4,561 units in February, allowing the Great Wall model to continue in the forefront of the resurgence of City EVs.

#5 – BYD Han EV
The rise and rise of BYD’s luxury sedan in China has been paused in February, with the big BYD ending a 6 record results streak, by delivering just 4,100 units, but it still enough to beat the 2nd best selling full-size model (Li Xiang One) by quite some margin, as the bif SUV had little more than half of its sales. The current poster-boy for BYD is expected to continuing thriving, in the foreseeable future, keeping the category leadership with an iron fist. 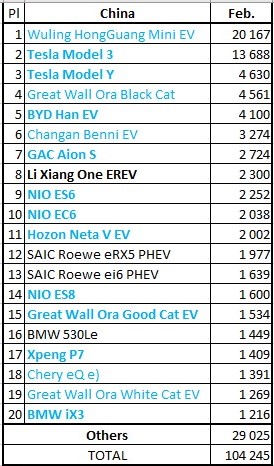 Looking at the remaining Best Sellers table in February, a mention to the record score of the small Changan Benni EV, with 3,274 units, its second record performance in a row, allowing this Toyota Yaris-like hatchback to jump to 6th last month, and raising the question if we aren't witnessing the rise of a new star in the competitive Chinese EV market...Discuss.

Another model jumping positions is SAIC's Roewe ei6 PHEV sedan, that showed up in #13 last month, thanks to 1,639 units, its best score since June 2019.

Below the Top 20, a reference to the ramp-up of the BYD D1 EV, a compact MPV (hurray for MPVs!) aimed at ride-hailing services, namely DiDi, that has reached 1,166 units last month, so we should see it in the table soon. 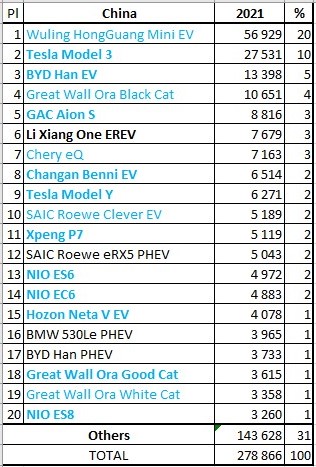 Looking at the 2021 ranking, if the Wuling Mini EV is the undisputed leader, while below it, the Climber of the Month was the Tesla Model Y, that jumped from outside the Top 20, into #9, and still in the Top 10, Ora's Black Cat climbed to 4th, at the expense of the GAC Aion S, the Li Xiang One was also up one spot, to 6th, and the Changan Benni EV jumped 3 spots, to #8.

The Black Cat and Benni EV rises underline the fact that City EVs are returning to the spotlight, with the Wuling EV being its finest example.

But it weren’t only with the City EVs shining, as Great Wall's intriguing looking Ora Good Cat joined the table, in #18, a surprising result, as compact hatchbacks aren't a popular segment in China, and something of a good news for Volkswagen's ID.3 (possible) career in China, apparently you can break into the local Top 20 with a compact hatch...

Looking at the makers ranking, the SGMW joint-venture (22%, down 1%) is in the leadership, while below it, there was an important position change, with Tesla (12%, up 3%) jumping ahead of BYD (11%, down 1%), with the Californian maker now assuming the runner-up spot.

Interestingly, in the race for Best Selling Foreign Brand not named Tesla, the #12 BMW has surpassed Volkswagen, now relegated to #13, with the German maker, which is the largest brand in the overall Chinese automotive market, being currently behind not only BMW, but also  below startups like XPeng (#9), or Li Xiang (#11)...Those ID models are badly needed, aren't they, VW?