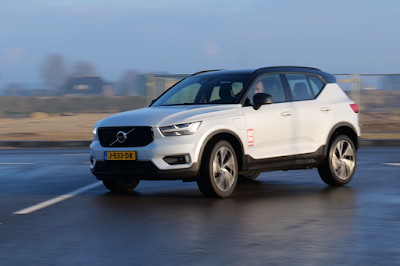 Volvo XC40 siblings shine
The Dutch PEV market dropped 20% in February, to 2,952 plugin registrations, but that result wasn't all that bad, considering that the overall market fell even more (-26% YoY), placing last month PEV Share at 14% (5.6% BEV), keeping the year to date PEV share at 13% (4.1% BEV), but with March expected to be a strong month (Tesla + VW high tides), expect the share to go up a notch or two by then.
Breaking down registrations between each plugin powertrain, BEVs recovered a bit, and are now responsible for 32%, a 3% recovery from January's disaster (29%), but far from the 69%  of 12 months ago, and even further away from the 82% of 2020, but expect BEVs to recover ground, as the year advances.
In February, the leader was the Volvo XC40 PHEV, scoring its second win in a row, this time with 231 units, while its BEV twin was 5th, with 114 registrations, both helping the Swedish SUV to become the 3rd best selling model in the overall market (#1 Ford Fiesta; #2 Kia Picanto), as 59% of the smaller Volvo registrations came from these two.
Back at last month plugin Best Sellers, in the 2nd place we have a surprise, with the veteran Nissan Leaf teaching the young ones a thing or two (insert deep discounts comment), allowing it to win last month Silver medal and the Best Seller monthly trophy in the BEV category.
The 3rd spot went for the Renault Zoe, followed by a familiar face in this market, as the Kia Niro EV secured the 4th spot, with 114 units.
Another surprise is the 6th spot of the Volvo S/V60 PHEV twins, with 93 registrations, thus making 3 Volvos in the Top 6 positions (and 5 in the Top 12, if we include the #12 XC90 PHEV and that liberal-thinking Volvo, the Polestar 2, in 8th).
In a more blue-ish Top 20 than in January, with 9 BEVs now, against only 5 then, a mention also for the Stellantis BEVs, with 3 representatives in the table, with the Peugeot 208 EV in #7 and its crossover sibling, the 2008 EV, in #9, while the Opel Corsa EV shows up in #19.
Regarding the PHEV armada, a reference to the 11th spot of the Mercedes C300e/de, with 64 units, the midsizer best score since 2016, while the #18 Range Rover Sport PHEV tank registered 54 units, its best performance in over 2 years.
A mention to two Citroen models, the C4 EV hatchback had 27 registrations, while the SUV C5 Aircross PHEV had 47 units, so after Peugeot, DS and Opel, now it's time for the double chevron maker to ramp up production and help the French-Italian-American-German Conglomerate to grow its plugin sales.
What about Tesla? - you may ask, the Model 3 had 37 deliveries last month, a significant fall from the 135 units of February 2020, but all these are peanuts compared to the March high tide, because Tesla concentrates the bulk of the European Model 3 deliveries on the last month of each quarter, next month will be the real test. 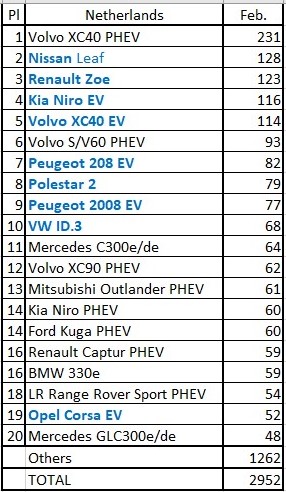 Looking at the 2021 ranking, if the podium remained the same, below it there were several changes, the Volvo S/V60 PHEV climbed to 4th, while its higher riding sibling, the XC60 PHEV, was up to #6, but the Climber of the Month was the Nissan Leaf(!), with the Japanese hatchback jumping from #20 in January, to #7 this month, becoming the new Best Selling BEV in the table.
Another model climbing was the Renault Zoe, that joined the table in #9, while the Volvo XC40 EV also went up to #13, highlighting Volvo's positive month.
After a slow January, the 2020 Best Seller, the VW ID.3, returned to the table, in #20, and expect the German hatchback to return to the front spots in March.
In the manufacturers ranking, Volvo (18%, up 2%) is the new Number One, displacing BMW (15%, down 2%) from the leadership, while Kia (5%) closes the podium, ahead of Mitsubishi (4%). 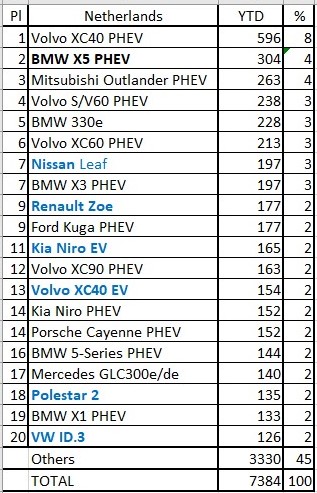