And yet, the top four positions in February belonged to BEVs, with the majority of the 2018 Top 10 belonging to fully electric models. Funny, uh?


All six BEV nameplates in the Top 10 have waiting lists, with some of them being over 8 months long, so if there weren’t production constraints, BEVs would easily overcome plug-in hybrids. If only there were enough battery factories to satisfy demand…


If the VW e-Golf dethroning the Renault Zoe was the headline in January, in February the French hatchback had its revenge, recovering the leadership, but the real news came a couple of positions below...

#1 Renault Zoe – The 2,439 deliveries in February signaled the return to form of the French hatchback, but it was still down 12% YoY, with no known production hiccups, and the demand as strong as ever, this slowdown can be attributed to the fact of LG not having enough batteries to provide the French automaker. As for market individual performances, if its domestic market is still underperforming (1,155 units, down 26% YoY), there were positive numbers in Germany (475 units), Portugal (144 units, a new all-time record for a single model there) and Spain (106 deliveries).

#2 BMW i3 – The German Stormtrooper Hatchback sales were flat (+2%) in February, with 1,598 units being delivered, with the all-electric version now representing 72% of deliveries, one can consider the i3 as part of the BEV team. Looking at individual countries, despite a weak result in Norway, with 377 units (down 24%), in Germany (311 units) the i3 presented a solid result, while Switzerland (232) had a deliveries peak. Looking into 2018, expect deliveries to remain stable in the coming months.

#3 Nissan Leaf – The 2.0 version of the most popular plug-in in the world has made its European debut in February and the first signs are that it is destined for success, and that despite the fact that it’s still not being available across the Continent, and in most markets the stock is made of demonstration units. By registering 1,540 units in February, the Nissan hatchback had the best landing month ever in this market, and with orders coming in at around 4,000 units/month, expect the Leaf to break all records in March, with the headline being the 2,000-plus(!) deliveries in Norway. But back to February, the main markets were Norway (781 deliveries), France (306), Netherlands (150) and the UK (120), probably the only ones where units were actually delivered in volume to customers.

#4 Volkswagen e-Golf – Remember the time when saying “e-Golf” was synonymous with “Norway”? Not anymore, despite Norway still being the largest market (472 units), the German BEV had 465 deliveries at home, with Austria (191) and the Netherlands (141) also posting three digit-performances, so the 1,481 units registered in February were more spreaded than a year ago, benefits of a more favorable context, originating a demand that Volkswagen wasn’t expecting and leading to long lead times, something the automaker promised to cut significantly this year, thanks to increased production.

#5 VW Passat GTE – After a neck-to-neck race with the Outlander PHEV, the German Midsize model crossed the finish line in Fifth, thanks to 1,065 registrations, with the Volkswagen model continuing to be popular in Scandinavia (310 units in Sweden, 132 in Norway) and at home (259 deliveries), the surprise came from France, with 131 units being registered there. This is a nameplate that is popular among company car fleets, due to its mix of space, decent electric range and (relative) affordability. But on the long run, one wonders how much damage new models, like the announced 2nd Generation Volvo V60 PHEV, might do to it. Looking elsewhere, besides the 13 positions jump of the #6 Nissan Leaf, thanks arrival of the facelifted version, February brought a couple of other news worthy facts, with the most important being the Tesla Model S joining the Top 20, in...#20, with the 600 deliveries of last month compensating the dismal January, when only 432 units were delivered. Its Model X sibling is even worse, languishing below, with just 557 units having been delivered this year.


On the other hand, the Porsche Panamera PHEV climbed another position, to #15, thanks to 530 registrations, and it could be even higher if…It wasn’t suffering from a common disease (Not enough batteries). No wonder that Porsche is looking to the upcoming Mission E like children waiting for Easter Eggs…


Outside the Top 20, the Smart Forfour ED had its best month yet (360 units), while Volvo is slowly increasing output of their S/V90 PHEV twins, having reached 538 units in February, pulling the 2018 registrations to 930 units. A Top 20 presence soon?


Looking at the manufacturers ranking there are some interesting duels, last year winner BMW (17%) is in the lead, but Volkswagen (16%, up 1%) is getting dangerously close, while Volvo is back at the glory days, reaching the medals for the first time since 2013, having surpassed Renault in the last place of the podium, if by only 48 units.

Outside the medal races, Mercedes is Fifth, with 6% share, but it already has Nissan (5%) in its rearview mirror, just waiting for the next corner (March) to overcome it and play catch with the medal bearers. 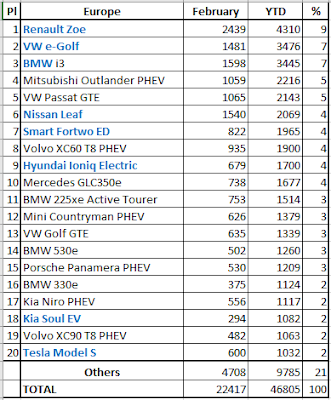