Smart cars on a roll in a changing market

The PEV Fever has definitely caught on in Germany, with February registering over 5.000 registrations last month, a 74% increase YoY, with the PEV Share now at 2%.

Behind this diesel-escaping stampede seem to be the diesel-related scandals and upcoming diesel-driving city bans, changing the landscape faster than some imagined...

Back at Plug-in sales, the Best Selling model in February was the Smart Fortwo ED (510 units), for the fifth time in a row(!), followed closely by the Renault Zoe (475 units, best performance since June), and the VW e-Golf, that with 465 deliveries, had its best result in 3 months.

So, three BEVs in the podium positions, all of them production (read: battery) constrained and with waiting lists. And (some) people still don't believe in electric cars...

Another model in High Voltage was the VW Golf GTE, with 317 units, the Hot Hatch best result ever, something that is even more impressive when one considers that the nameplate exists since 2014 and it hasn't received any kind of update since.

In a traditionally fragmented market, the leader Smart Fortwo ED started the year like a firm leader, but below it, several position changes happened, justifying this market fame as one of the most entertaining to follow.

The most relevant change was the Renault Zoe climbing two positions to Third Place, while the Best Selling PHEV title also changed hands, with the VW Golf GTE stealing the ceptre from its larger sibling, the VW Passat GTE.

A new face in the Top 10 is the Smart Forfour ED, jumping four positions to #9, thanks to a record 253 deliveries, confirming that Smart EVs are as hot as pepper in Germany...

Maybe they should make a "Red/Black Pepper" edition, signaling the Brand current hotness? Just a thought...

In the second half of the table, the Mercedes E350e had a record performance in February, with 134 registrations, being now at #15.

Well, as in many markets outside North America, 2018 started on the slow side, with the best selling of Tesla nameplates, the Model S, scoring only 169 deliveries this year, thus staying outside the Top 20. Adding insult to injury, in February, the Porsche Panamera PHEV had its second best month ever, with 180 deliveries, pulling it to #12...

In the manufacturers ranking, Volkswagen started the year in the lead, with 20% share, in Second Place we have Smart (16%), while last year winner BMW is now only Third Place, with 14% share.

Regarding the BEV/PHEV share, BEVs were the most sold in February, but in 2018, PHEVs still have the upper hand, with 51% share. 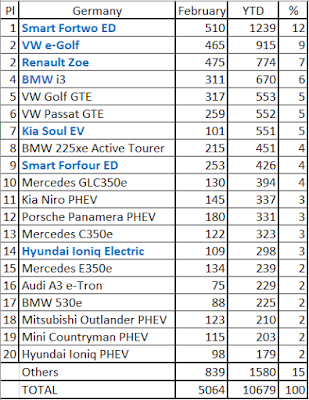 As plug-ins reach new heights, regular hybrids are feeling the heat and being reached by PEVs, Toyota still owns the podium, but Plug-ins are getting closer, if the leader Toyota Yaris Hybrid still seems unattainable, the Third Positioned Auris Hybrid could fall next month.